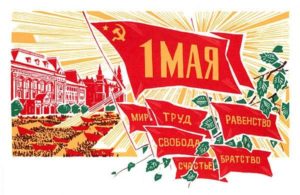 May 1st is commemorated as International Labor Day, or commonly called May Day. On that day, workers in a number of countries gathered, and usually held a demonstration demanding the enforcement of labor rights. How was labor day as spring day in Russia?

However, May Day was at first not synonymous with the struggle of the workers. According to the Encyclopedia of Britannica, May 1st in medieval and modern Europe is a holiday to celebrate the start of spring. While in other parts of the world May Day is celebrated as the end of spring and the beginning of summer.

The celebration was originally intended to ensure the fertility of plants, livestock and humans. When most Europeans embraced Christianity, May Day celebrations were synonymous with pagan culture and its traditions widened. Read also How Russian Spent Their New Year

May 1st is a symbol of the struggle of Russian workers for better conditions. The struggle took place for about 100 years. On that day in 1890 the workers demanded more adequate working conditions and wages. The charge lasted until 1917. In 1918, 1st May was celebrated as a day of international labor solidarity. May 1st was a public holiday in the Soviet Union, workers marched until 1990. In 1992, the Russian government changed the name of the day into spring breaks and labor days. You may also read Easter Eggs in Russia

How People Spent Their Holiday

Like common holiday, the workers enjoy their holidays during labor day. Some workers went to the village and gathered with the family. Some are travelling with their families. Popular destinations for this holiday are places that have many flowers. For example flower gardens. On the spring break, the flowers bloom beautifully. It’s also common for having barbecues with family or friends. For couples, usually they are going for a date and tulip flower become gift for women. See also Wedding Traditions in Russia

The demonstration was held as a solidarity against the effort to forget history and revive fascism. As well as to support the victims of war in Donbas, eastern Ukraine. Participants marched from Kaluzhskaya Square to Teatralnaya Square.

Generally demonstrations in Russia are peaceful. This is because their leaders are the ones who fight for the labor day, who is President Putin. But the participants of this demo still carry some banners. Some of the participants held banners reading ‘for decent work, salary, and life’ – for better work, salary and life. The flag of a red-colored sickle hammer, resembling a Soviet flag, appears to be flying at the demo site. Read also Ded Moroz as Symbol Christmas in Russia

The Most Common Symbols of Spring and Labor Day

Each flower has different characteristics and meanings. Many countries around the world take some interest as a symbol of the nation’s personality. The interest is then referred to as the national flower of his country, such as tulips.

The tulips are the national flower of the Turkish and Dutch countries. These flowers include bulbous plants in the lily family. Its type reaches about 75 varieties.

Many people who admire the beauty of this flower, ranging from women, men, old, young, almost all like tulips. Although not the most luxurious flower in the garden, the beauty and elegance of this simple tulip plant has the following symbolic meaning:

So also in Russia. The tulips are symbolized in spring day, indicating that spring is coming to an end. The giving of tulips to the couple on that day means that the couple deserve the beauty even though it has entered the late spring.

Spring is the season where flowers and many plants grow in interest. Late spring marks that summer is coming soon. Summer is a season suitable for cultivation for certain crops.

There are many ways to express feelings. Some use flowers, writing, food, until the balloon. Usually the provision of these objects is done in a special moment. Among them are weddings, birthdays, anniversaries, and other special moments.

The balloon was first discovered by Michael Faraday in 1824. Rubbers are material of balloons at the time. Faraday experimented with filling the hydrogen gas in the balloon. Balloons are used as toys to aeronautics. Increasingly, more and more people use balloons as decorations or decorations at parties.

Balloons have a metaphorical meaning. Its describing as a held object then released away. There is a time in life, someone knows when not to let go. That designed of balloons teach young children about this.

The balloon symbol is trying to hold something but can also indicate readiness to release it. From some literature, the meaning of letting go is to let go of a bad past and be ready for the present to be better. Hope is the meaning of balloons as symbol. See also History and Meaning of May Day in Russia