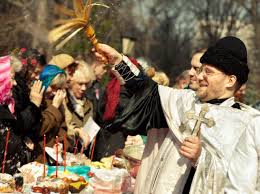 Easter is the important celebration for Christians. Easter is identical with Jesus. Paul called it “the Passover lamb”. The Christian congregation today believes that Jesus was crucified, died and buried. Then on the third day rose from the dead. Easter celebrates the day of the resurrection. This is the most important celebration because it commemorates the most sacred event in Jesus’ life. As recorded in the four Gospels of the New Testament. Easter Sunday, Resurrection Day, or Sunday Awakening are name of this celebration. How to celebrate Orthodox Easter Day in Russia? Read Also Fact About Easter Day in Russia

There is not much difference in celebrating the Passover between Orthodox and other Christians. Basically that difference is not a principled thing. Orthodox, Catholic, and Protestant Christians alike believe in the resurrection of Jesus Christ. There are some fact about Orthodox Easter Day in Russia.

Easter is usually celebrated between the end of March to the end of April for the Christianity of Western rites. Eastern christianity celebrates the beginning of April to early May. Easter Day falls on the first Sunday after the Full Moon Month. That is the first full moon of its fourteenth day or after 21 March. You can read Common Decoration of Russian Christmas

Christians participate in times of fasting, prayer, and repentance to become closer to God. The most important period of fasting in the Orthodox Christian calendar is the Pre-Easter Period. It is a period of pre-Easter purification – the most important Church celebration. During Pre-Christian times, Christians fast from animal products, pray, do good deeds, and repent. Read Also Ded Moroz As Symbol of Christmas in Russia

Jesus fasted 40 days before beginning His ministry. Therefore, the pre-Easter period is also symbolized as fasting 40 days before the victory of Christ in resisting the temptations of the devil.

Fasting starts from Wednesday, 46 days before Easter. This is because there are 6 days do not perform fasting. That is on Sunday. Ash Wednesday is the day when orthodox Christians start fasting with incised ashes on the forehead. On this day also humans remember that their origin from dust.

The Eastern Orthodox Church requires women to cover their heads with a veil, just like a Muslim woman, while in church. This practice occurs in the Russian Orthodox Church. In addition, when to church, women are forbidden to wear trousers. Women should wear long skirts.

For the Orthodox, Easter is a very emotional celebration. After a week-long worship service and strict fasting, at night after the procession and chant the prayer chant, the priest stopped in front of the closed temple door. The pastor will then open the door and will symbolically open the door of the holy tomb and announce to all that Christ has risen. Throughout the Passover mass, the pastor and congregation will exclaim: “Christ has risen! He is indeed risen!” This moment is very impressive. These cheers broke through the silence of the night and resonated into the still-leaved houses and trees.

Many cultural elements, including the Easter rabbit, Easter eggs, and Easter cards have become part of modern Easter celebrations, and these elements are commonly celebrated by both Christians and non-Christians. See also How to celebrate Christmas in Russia

Eggs are the earliest emblem of life. This is in accordance with the meaning of Easter which is the beginning of life for Christians. Orthodox Christians coloring Easter eggs with a bright red color. Its symbolizes the new living Christine blood. The green-colored easter eggs symbolize the newly emerging buds. This is also linked to the normal execution of Easter in the spring. Read also New Year in Russia

During the reign of the Russian Tsar, celebrating Easter was much more complicated than Christmas. Easter bread and other special foods are served. Ornamental eggs are given as gifts.

In Russia, now many stores are back selling special skates to topple eggs. The rule of this game is that you are required to compete quickly overthrown eggs to touch the prizes available at the end of the lane. The game ‘egg duel’ held, where you can attack other eggs, to see whose eggs are cracked. The housewives will also race to decorate the eggs as beautifully as possible. Then present them to their relatives and friends.

How can rabbits become element in easter day? The tradition of Easter eggs is often associated with the Easter Rabbit. The Easter Rabbit is a traditional symbol in the Passover celebration. Its role for judge whether a child is good or mischievous (like Santa Claus). Rabbits will bring an Easter egg to good children the night before Easter arrives.

Rabbits are also a symbol of fertility. This is because the birds lay eggs early in the spring, as well as the rabbits that breed with large numbers in the spring. Rabbits have a very fast reproductive cycle. So it is can symbolize with the meaning of fertility.

In the West, rabbits and eggs become a popular symbol on Easter celebrations. In Russia you will find colored eggs and kulich (pasche cake). This Easter cake is very popular in Europe. There are many recipes of Italian pastry cakes sold in Russia. Another unique tradition in Russia is to make paskha (Russian for Easter). It is a dish made of cottage cheese with raisins. The shape of cakes is like a pyramid as a symbol of the sacred tomb.