A hat can be very functional too. When the winter comes, you will see many people wear beanies. This hat will keep your head comfortable and war, even when the cold wind blows. Not only will you find a hat for the winter, but also for the summer. If you want to go to the beach, you can wear a large brim summer hat. This hat can protect you from too much sunlight so you can still enjoy your time at the beach without sacrificing your style.

Russia also has its winter hat called Ushanka. This hat is made of a thick fur that is very suitable for the winter weather. From time to time, the Ushanka kept improving. To find out more about it, let’s see the 3 innovations of Russian Ushanka

Ushanka is a Russian fur hat that has two ear flaps. These ear flaps can be worn in there different ways. There are ties on the flap so you can tie it around your chin. That way you can keep your ears, jaw, and lower chin from the freezing temperature.

As mentioned above, this hat is made of fur. The original version is made of either a cheap sheepskin or the fur of rabbit or muskrat. You can even found the one made with mink fur. The mink-fur Ushanka is the warmest kind of Ushanka. This hat is commonly worn in the Arctic regions of Russia where the temperature is around -70 to -40 oC.

The popularity of Ushanka keeps increasing. The demand for it is also getting bigger. This is when the innovation came. The first out of 3 innovations of Russian Ushanka is the change of its basic material from original fur to faux fur, or called by the Russians “fish fur”. The simplest material to make faux Ushanka is a pile of wool. The innovation of using synthetic fibers has also been introduced. 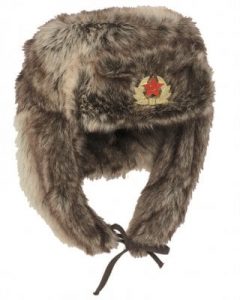 But if you want to get the warm advantage from the hat as well as the natural feeling of an original fur hat, there are also Ushankas made of the mix of acrylic polymers with other polymers. This version does not look fake at all and is claimed to be able to provide as much warmth as the real one. Another advantage is it will be easy to maintain. You can wash it without being worried that it will ruin the material. The price of this Ushanka is also more reasonable and can be manufactured more.

If you are interested to buy the Ushanka, you can easily find it online. Many market places provide unisex faux fur hats. They also offer you with various colors of Ushanka. For people who love bright colors, you can choose your favorite color and match the hat with your clothes. Don’t worry if prefer to wear a darker color hat, you can also find the black or the gray one.

2. The Crown and The Ear Flaps

Ushanka is a part of military and police forces winter uniform in many countries, such as Canada and Western Countries where the winter season is really cold. More currently, a different color of Ushanka is worn for different job or occasion. For example, the gray one is for American civilian police, the green one is for camouflage, while the blue one is for police. It is also still worn by the Russian army though, since 2013, they have made an improvement. The second part of the 3 innovations of Russian Ushanka can be seen in the crown and the ear flaps. The Russian has improved their unique hat by making the crown rounder and the sealable openings in the ear flaps smaller so the army can wear headphones.

3. The Use of Ushanka

Before wearing Ushanka, the Russian army had Budenovkas as a part of their winter uniform. Budenovkas is a hat made of felt. This material does not provide enough warmth for the soldiers and became one of the reasons why the Soviet troops failed during the Winter War against Finland. The Finnish Army was more prepared at that time. They had better weapons and uniform. At that time, they already wore fur hats similar to Ushanka. Realizing the failure of the Winter War, the Soviet Army got their winter uniforms redesigned. They set the Finnish Army as an example to make their Ushanka replace the Budenovkas. They also made Ushankas with two different kinds of materials. The first one was made of fur from animals (intended for the officers) and the second one was made of fish fur (intended for the rest of the army).

Nowadays, the Russian army does not only wear Ushanka during the winter but also during any weather. Even though it is called a part of the everyday uniform, the decision of the Ushanka wearing style is not decided by the army. The unit commander is the only person that decides whether the hat is worn by tieing up the ear flaps, tieing it down around the chin, or with ski style.

Since the Ushanka is getting more popular around the world, you will find that the army is not the only people wearing it. The third part of the 3 innovations of Russian Ushanka is the use of it in everyday fashion. Famous brands have worn this hat and set the trend. Brands like American Eagle, Abercrombie and Fitch, Channel, and Ralph Lauren promote it not only to make a more stylish appearance but also as a promotion of animal-friendly fashion. For people who love hat but do not want to feel guilty about the animals being hurt and killed for the hat making, this is totally a great option for them 🙂