No one would refuse some sweet cupcakes. What’s more if they are Russian cupcakes that are delicately decorated with rose-shaped buttercream frosting on top. Such a mouthwatering feast for the eyes and tongue. Not surprisingly, the cute and pretty cake is popular offering on parties and celebrations. However, do you know that you can make it by yourself? Of course, you would need some expertise to make the flower frosting, but it is not impossible to do it by yourself once you know how to make Russian rose cupcake at home.

First, you have to prepare the cupcakes that will be decorated with pretty roses. There are various Russian cupcake recipes that you can access online. Generally, you will start by mixing all-purpose flour, baking soda, and salt in a bowl.

In another bowl, beat butter and sugar; then add eggs and egg whites one by one. Add vanilla, Vodka, and Kahlua (or other types of liqueur available in your kitchen) in the butter mixture. Pour the butter mixture into the flour mixture slowly, alternating with milk until they blend smoothly. Lastly, put the batter into cupcake mini mold, and bake it in the oven. Take the cupcakes out after they are done, and leave them to cool for a few minutes while you are preparing the buttercream frosting. 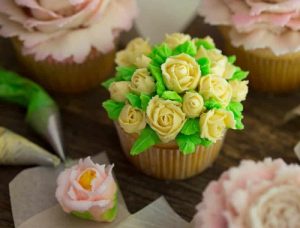 Second, you have to prepare the buttercream frosting. It is even more easier that making the cupcake. Get 2 sticks of butter, 4 cups of powdered sugar, 4 Tablespoons of Kahlua, and edible coloring gels (at least, you have to prepare red and green buttercream for variety). Do note that Kahlua can be replaced with other liqueur (another popular option is Baileys). After all the ingredients are gathered, melt the butter. Beat the melted butter until creamy, then put in the sugar and beat again until they are mixed well. Add the liqueur and some edible coloring gel, then beat again until it is perfectly smooth.

At this stage, you have to make sure that the buttercream frosting are in the right consistency. It should not be too hard, but not too soft either. If you are not careful and the frosting is still clumpy, then it may clog the piping tips later and give bad results! As an alternative to buttercream frosting, you can also use Swiss meringue frosting that is softer and won’t clog, but they can be relatively more difficult to make for people who are not used to work with delicate icing.

Third, you have to get some tools to make the rose decoration. The tools are Russian flower piping tips for mini rose, rose petal, and leaves; piping bags (if you don’t have one, then you can cut a corner in a transparent plastic bag for cheaper alternative); small icing spatula; and a toothpick to alleviate any clogging that may happen in the piping tips later.

Place the rose tip in the piping bag, then fill up the bag with white or red buttercream frosting. Pressure the bag until buttercream frosting starts to show up at the forefront of the tip. Wipe the tip clean before starting to decorate the cupcakes.

To make the flower petals, hold the piping bag until the flat end of the tip is directly placed above the surface of the cupcake. Pressure the bag while pulling it straight up. Start releasing the pressure when the petal is nearly done, and continue to pull it up until the flower petal separates from the tip. Smart trick: start quick counting when you begin, then release the pressure when you get to 2 or 3 (depending on how big the petal size).

At this step, you have to keep focused. Do it slowly, but steadily. If your hold on the bag is unsteady, then the petal may be smashed. On the contrary, if your pressure on the bag is too strong, then the result will not look good either. It may be a little bit difficult for beginners, but you can practice by making decorations on a parchment paper beforehand.

Continue making the flower petals as much as you want. You can make a single rose or clusters of small roses in each cupcake. For rose clusters, take turns to decorate the cupcakes with buttercream flowers in white (original color) and red or more. Use your imagination to vary the shapes and sizes. You can also imitate Youtube videos on how to decorate cakes for more inspirations.

After all the roses are done, you can start adding leaves at the outer part of the single rose or in the middle of the rose clusters. The steps are quite similar. Place the leave tip on the piping bag, then fill it with green buttercream frosting. Hold the piping bag until the tip is just a tick above the surface area where you want to place the leaf. Pressure the bag, then release the pressure quickly once the buttercream arrives on the surface area. Repeat until all of the rose clusters are filled up with leaves around it.

For variations, you can add some red buttercream at the center of white roses with a small icing spatula, and vice versa. If you have other colors available, you can also add yellow buttercream or purple buttercream for the center of the roses. Alternatively, you can use small edible sugar pearls too. It is easier than making buttercream frosting in a lot of different colors.

So, after practicing this lesson about how to make Russian rose cupcake at home, are you able to do it? No need to be a chef or years and years of practice to decorate cupcakes with pretty roses, right!? The same steps can be followed to decorate the cupcakes with other types of flowers, such as tulip, magnolia, or other popular Russian flowers. You only have to buy the related Russian piping tips to make them. As there are dozens types of piping tips, there are literally as many flower decorations you can make.

Of course, professional patisseries and bakers may have some tricks to make even better and prettier rose decorations. However, these steps are enough if you want to make some Russian rose cupcakes for birthday party or other small celebrations with close friends and family. It is relatively simpler than some other Russian cakes for birthday party. Although the beginning may seem hard, but you can be addicted to it when you have become more skilled.