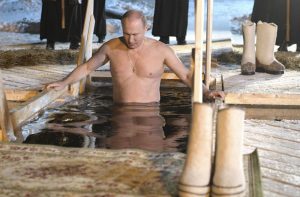 Winter swimming is like a popular challenge in Russia. Instead of being popular in a certain period of time, ice-swimming is an annual trend in Russia. It usually celebrated to commemorate the Christian’s Epiphany days.

Epiphany is a holiday marking Jesus Baptism at river Jordan.  Although it’s originally a Christian holiday, nowadays the participants of the swimming festival in Russia transcend all kind of belief regardless of religious affiliation. It has become some kind of a folk festival.

Ever saw a video or news of Russian ladies in their bathing suit challenge themselves to dip in the ice-cold water? Apparently, winter-swimming is one of the favorite things people do in the wintertime. Luckily, Russia has plenty of lakes and river that are frozen perfectly every year. There’s no shortage of spaces when it comes to a venue.

Here are the 6 favorite lakes to do the swimming festival in Russia.

The second largest lake in Europe is located in Karelia Republic, Russia. Part of it is accessible via Leningrad and Vologodsk oblasts. The lake has 1650 island on it, with the most popular one is Kizhi island. Kizhi island is a UNESCO world heritage site known for its Kizhy Pogost, a historical complex consisting of two large 17-century wooden churches and a bell tower.

To visit Lake Onega, you can go to one of these three major cities: Petrozavodsk, Kondopoga, and Medvezhyegorsk. At wintertime, participate or witness the local swimming festival. On epiphany day, holes will be cut on the lake to allow people dipping in freezing icy water.

The amazing Lake Baikal is almost a must for everyone visiting Russia, especially those who do trans-Siberian adventure. The largest freshwater lake is also ancient, believed to be formed 20-25 million years ago. It’s home to many flora and fauna, including a species of freshwater seal. The scenery surrounding this lake is incredible, invoking admiration from any visiting tourists. If you want to visit Lake Baikal, stop at the city of Irkutsk.

Lake Baikal is a popular spot to host a swimming festival. For example, Lake Baikal Icy Festival held in 2017. Lake Baikal also holds normal open water swimming events. Participants swim as far as 5 km in Irkutsk Region of Russia during the summer. In this time, The water temperature is around 12-15°C, not so cold.

Technically a sea more than a lake, Black Sea is also a favorite place to do the swimming festival in Russia. On epiphany days, plenty of people start taking turns to dip. Epiphany celebration on the Black Sea starts as early as 00 AM in the morning. The advantage of dipping at black sea is the fact that this sea has milder temperature compared to other lakes and rivers in Russia.

To swim at the black sea, it’s best to go to Sochi. The resort city Sochi is located at the coast of this lake. Enjoy the perfect weather even during wintertime. Sochi also offers a lot of choices when it comes to culinary. There are plenty of restaurants offering from seafood to classic Russian delicacies. They will fulfill your belly after all the winter-swimming.

Yekaterinburg has several lakes in which Russian people love having a swimming festival here. One of these lakes is Lake Shartash. Located close from downtown Yekaterinburg, the lake is easily accessible just by walking. Apart from swimming, Yekaterinburg locals love to do fishing, sunbathing, or having a picnic with friends and family. The lake is also one of the place to dip and swim. You can expect a line of people waiting for their turn during the Epiphany celebration here.

Lake Shartash has bicycle tracks where you can cycle around the lake. The scenery is beautiful and very green during the summer. The lake is only 2-3 meter deep, and it said the lake will disappear in 50-70 years – so better go now. There is a natural rock monument nearby called Kamennie Palatki (stone tents). Its formed by a volcanic eruption a long time ago. This natural monument was also used by ancient people as an altar to place offering.

Lake Ladoga is the largest lake in Europe. It is located in the vicinity of St. Petersburg, Russia. The lake provides the water source for St. Petersburg’s Neva River. Lake Ladoga is beautiful and important historical sites. The lake is surrounded by ancient villages whose history can be traced back since hundreds of years ago.

Lake Ladoga is not really famous for winter swimming. Russian people, especially the ones living in St. Petersburg, opt for Neva River instead, whose water comes from Lake Ladoga. The river is a popular spot for Epiphany dipping. Make sure to check the area around the embankment during January 19. You’ll see many celebrations take place there.

The largest of all lakes in the world, Caspian sea is a favorite lake to do the swimming festival in Russia. Russia shares this lake with several other countries: Azerbaijan, Russia, Kazakhstan, Turkmenistan, and Iran. The lake is landlocked, although it named “sea”. It receives water from major Russian rivers such as the Volga River and the Ural River. The water is a bit salty here.

Caspian is very shallow so it can be safe for swimming. On the delta of the Volga river, it’s depth is only 2 meter. Swimming here come with a nice bonus, Caspian is the largest source of caviar. Do not forget to treat yourself with this delicacy while visiting the Caspian Sea.

Swimming festivals in Russia are not only held on Lakes. Rivers are another option. In Moscow, the popular river to hold swimming festival is the Moskva River. In St. Petersburg, it is Neva River. Central Russia is the territory of Oka River. The Volga, the longest river in Russia, is a go-to spot for people at Nizhny Novgorod, Kazan, and Samara. Wherever you go in a Russian city, make sure to check out the river in that area.