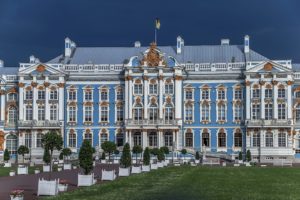 Catherine palace is in the town of Pushkin, near St. Petersburg. People once called the city as Tsarskoye Selo or the Tsars’ village. History of the beautiful Catherine Palace began when Peter the Great once created the city in 1703. He built it on a marshy river delta of all places available. At that time, people thought he lost his mind. However, he did not mind people thinking of him. He kept working until he successfully created the city. His hard work resulted in today’s view. The city is full of canals. Neva River even flows through it.

In the city, people will never be too far away from water, great art, cathedrals, or theater. There are the State Hermitage Museum, the Faberge Museum and St. Isaacs and the Kazan Cathedrals. The Church of the Spilled Blood, Peterhof Palace, the Peter and Paul Fortress, and the Mariinsky Theatre also stand there. Besides, Catherine Palace lays about 25 km outside the city.

As one of the largest palaces in St. Petersburg, Catherine Palace provides both beauty and luxury. It was once an imperial palace, but now it serves as a museum. Most people who visit the place will easily fall in love with the architecture and design of the palace.

When talking about history of the beautiful Catherine Palace, most people will find it amazing. This is due to the fact that this building had received so many renovation since 1733. Moreover, Catherine palace also received renovation in 2012. Now that the work has finished, people can enjoy its beauty and luxury.

Empress Elizabeth first began the reconstruction in 1743. She asked four different architects to do the work. The first architect was Chief Architect of the Imperial Court. She instructed him to redesign Catherine Palace on a scale to rival Versailles. She then hired Bartholomeo Rastrelli to design it in a flamboyant Rococo style. The work finished on 30 July 1756, which was 4 years after the work began. The work resulted in the palace having 325-meter long with nearly 1 km in circumference. The width of Catherine Palace itself stupefied Russian dignitaries and foreign guests.

In addition, German sculptor Johann Franz Dunker put his heart on designing exterior looks. He also worked alongside Rastrelli to design the interiors. Dunker was the one who chose the color of blue and white of the wall. He also worked on gilded detail of the sophisticated stucco facade and numerous statues put on the roof. This work alone occupied around 100 kg of gold. Catherine the Great deplored the excessive expense after discovering that the sources of money used to fund the work came from the state and private funds.

Despite the disagreement, Catherine the Great also took part to design the interiors. She asked a Scottish designer, Charles Cameron to design the Green Dining Room. She particularly asked Cameron to do the work to satisfy her Neo-Classical taste although it contrasted to Italian rococo/ baroque styles. Cameron ended up designing many rooms in the palace.

The most famous room in the palace is probably Amber Room. Peter the Great found Amber Cabinet in Koenigsberg Castle. Knowing that, King Friedrich Whilhelm I of Prussia presented the cabinet to Peter the Great. Thus, Peter the Great asked Rastrelli to design the Amber Room by using the Amber. Florentine and Russian craftsman surrounded the panels with gilded cravings, mirrors, more amber panels and mosaics of Ural and Caucasus gemstones. The work required around 450 kg of amber and finished in 1770. As the panels were fragile, Peter employed a caretaker to maintain and repair them.

After the Great Fire occurred in 1820, Alexander I along with Vasily Stasov modernized some interiors to suits the Empire style. As the circular staircase was considered old, Stasov Staircase was constructed in 1840. The final touch began in 1863. Empress Elizabeth hired Russian architect I. Monighetti to construct and decorate the main staircase. The architect designed it in Rococo style.

During the German occupation, the ensemble suffered. Many paintings were burned. Even the Amber panels were took apart in 36 hours. German troops shipped them to Germany and no one could find it. However, many Russians believe that the panels still exist somewhere in Germany.

In 1982, domestic restorers N. Baranov, A. Kedrinskiy, N. Tumanov, etc. began recreating Amber Room. The recreation process took 20 years long and cost more than $12 million. German companies funded the process. Unfortunately, most of Stasov’s interiors have not been restored yet after Chatherine palace was destroyed by German troops during World War II.

In 2003, President Vladimir Putin and Chancellor Gerhard Schroeder re-opened the museum to introduce history of the beautiful Catherine Palace to public.

You might also want to know about Bread Riots in Russia and History of Russian language.