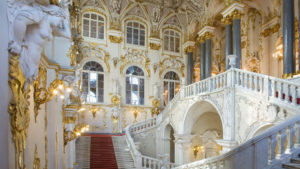 The State Hermitage Museum located in the central of St. Petersburg. The museum itself is the oldest museum in St. Petersburg and the second largest in the world. It was founded in 1764 under the rule of Empress Catherine the Great.

At that time, the Empress acquired huge collection of paintings. The paintings originally were in the hand of a Berlin merchant named Johann Ernst Gotzkowsky. The museum has been opened for public since year 1852. Back then, the Hermitage building served as workplace and also home to almost a thousand people. The people that reside in the building includes the Imperial family.

Aside from that function, the place itself also served as an amazing showplace to display wealth. It was showed trough the massive at collections inside. Some important events also being held in the Hermitage building. It includes masquerades for nobility and grand ceremonies for officials (state and government). You should also see Best Places in St. Petersburg For Muslim Traveler

1. Behind The Name of Hermitage Museum

The definition of hermitage is the dwelling of hermit. The word itself derives from Old French “ermitage” and Greek “eremites“. It has the literal translation of “people who live alone”. The Hermitage Building given its name for the exclusivity of the building in the old days. In the early days, only few peoples can enter and visit the building. Therefore it makes this building an exclusive place in St. Petersburg at that time.

The former four display the collections monuments and also art collection of the Western Europe and Russia. It also has archaeological collections from the countries of the East. In fact, in 1837 a fire destroyed most of the rooms of the Winter Palace. It also ruined the exterior of the building. The fire was caused by a small mistake of construction. By that time, there was a construction occurs in the Small Throne room. For that reason, the Winter Palace was later re-built to keeps its shape and fix the exterior of the building. You should also see Various Reasons Why You Should Visit St. Petersburg

One of the building in the Hermitage Museum Complex is Winter Palace. Back in the early days, it used as an official residence of the Romanov Tsars. In fact, it was the last residence of the Russian Tsars. The Romanov Tsars itself was the second dynasty to rule Russia. It ruled the region after the fall of the House of Rurik. The dynasty reigned from 1613 up to the abdication of Tsar Nicholas II. It happened in 1917 as a result of the February Revolution.

The Romanov Tsars got prominence as boyars of the Grand Duchy of Moscow. It is later called as Tsardom of Russia. In 1613, Mikhail Romanov was offered the Russian crown by the zemsky sobor. It was the years knows as interregnum or time of troubles. Later on, he made it to the throne as Michael I. He became the first Tsar of Russia from the House of Romanov. Years later, his grandson succeeded in establishing the Russian Empire through a series of wars.

The stains of the last monarchy found in a lot of areas inside and outside of the Winter Palace. One of the evidence is able to be seen in the second floor of the Palace. There is an inscription on the window on one side of the wall. Empress Alexandra Feforovna was the one who made the inscription. The first floor of the Winter Palace designed to show the wealth and also the extravagant tastes of the Romanov Tsars. The first room which is the State Rooms were used to hold rituals and ceremonies of the Imperial Court.

The Hermitage Museum has a separate room allotted by Rembrandt. The room itself presents 24 paintings by the Dutch artist. It is the largest collection outside the Netherlands. The saying is that to see all parts of the museum, visitors need to walk for 22 kilometers. And if visitors spend one minute on each of the art collection, it will take up to 11 years to finish the whole collection!

The Hermitage Museum possesses almost 3,000,000 art items. It dates back to the Stone Age era up to the present days. Even the original collection of Catherine the Great still remains in the Hermitage Museum building. The art collections varies of types. There are Egyptian antiquities and Classical antiquities. It also has prehistoric art, jewelry and decorative art, Italian renaissance and Italian and Spanish fine art.

Some other collections are Russian, German, Swiss, British and French fine art. There are also French Neoclassical, Impressionist, and post-Impressionist art. And home of the Modern, German Romantic and other 19-20th century art.

There is an annual festival held dedicated to the Hermitage Cats. On the day of the festival, the Museum allowed the visitors of the State Hermitage Museum to view the cellars of the Winter Palace. The cellars are where the cats live. There is also a discovery game that visitor can take a part in. It consists of activities such as going around the museum, reading the journey of Hermitage Cat and later reach the last spot. The last destination will be an exhibition-event. The exhibition event consists of art dedicated to the cats.