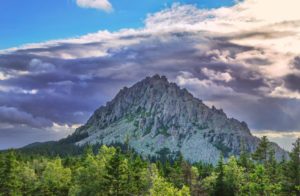 The Ural Mountains of Russia is one of the oldest mountains in the world. Its age reached 300 to 250 million years old. Through the time, there were some erosion that cause lowering of its surfaces. Ural Mountains itself span 2,500 kilometers. It is known as the boundary between Europe and Asia. This mountain range past through western Russia from north to south. The mountain range forms conventional boundary. It is a boundary in between the continents of Asia and Europe. Vaygach Island and the islands of Novaya Zemlya form a further continuation of flow. The flow continues to the north into the Arctic Ocean. The mountain itself also ranges from coast of Arctic Ocean to Kazakhstan and Ural River.

The Ural Mountains are known for its mineral wealth. Most of the mineral wealth have been mined by the people around the world for a long time. Some regions contain the common mineral, such as aluminium, magnesium, and iron which are used in most industry. And other regions contain very valuable mineral, such as diamond, gold, platinum, and a wide range of other gemstones. Ural Mountains also contain deposits oil and natural gas.

The Ural Mountains themselves are divided into five sections. The Nether-Polar Urals extend more than 225 kilometers to Shchugor River. They are homes to the highest surfaces among others in that range, including Mount Karpinsk (1,878 meters) and Mount Narodnaya (1,895 meters). The second section is the northern most Polar Urals. They extend from Mount Konstantinov Kamen in the northeast to Khulga River in the southeast. The length of the Urals reached for 400 kilometers. In this region, the mountains have 3,300-3,600 height averages above the sea. The highest peak in this region is Mount Payer for about 1,472 meters. Although the peak is still lower than the mountains in Nether-Polar Urals region. These two sections are covered by glaciers and permafrost. You can also see Useful Facts From the Tallest Mountain For Climbers

The Northern Urals stretch for more than 550 km to the south. They consist of highly peak mountains for about 1,000 meters. The highest peak is at Mount Telpos-lz, rises to 1,617 meters. Most of the summits in this range are flattened and have had some erosion. The erosion happened because of the tectonic movements. The Central Urals stretch for more than 320 kilometers to the Ufa River. The mountains in that region have 500 meters height in average. The highest peak is at Mount Sredny Baseg for about 994 meters. Its region is covered by residual outcrops. The last section is the Southern Urals that extends for 550 kilometers to the Ural River. This section contains of several mountains with 1,200 meters tall. And it also culminating in Mount Yamantau.

2. The Scenery of Ural Mountains

Besides having abundant mineral wealth, Ural Mountains are also known for its beautiful scenery. The scenery consists of the beauty of their lakes, rivers, and forests. A lot of rivers in Russia originate from Ural Mountains. These rivers flow to the south for about 2,428 kilometers. Then it ended up in the Caspian Sea. The mountains have also some deep lakes. The deep lakes give us more beautiful scenery, especially when it is sunset.

The mysterious island of faith is an island in the middle of the deepest, cleanest and the most beautiful lakes in Ural Region. The name of the lake is Lake Turgoyak. This place known as the best place for people who wants to look for some inspirations. The tourists are especially from artists, writers, and also musicians. The place become an awesome choice for the peacefulness. Another reason is for its scenery that they offer through ancient megaliths.

Virgin Komi Forest is the famous largest forest in the world. This 32,800 square kilometers forest has been listed in the World Heritage list. The Ural forests are inhabited by animal. Those animals are especially Siberian type, such as brown bear, fox, wolf, elk, squirrel, and sable. There are no specific animals, such as mountainous species. It happened because the forests have some accessible routes from the nearest settlement. That caused a lot of people to have their activities in the forest every day. In the Southern Urals, there are a lot of badger and black polecat. Furthermore, hazel grouse, cuckoos, and black grouse represent the bird species in that region. For more information about other mountains in russia you can see 4 Most Popular Mountains in Russia Voted By Tourists

Along the Urals mountains there are a lot of natural wonders treasure to discovered. All of the places have natural stunning beauty that mesmerizing visitors. The natural wonders of the Ural mountains that will be talked about here is Lake Aushkul and Burning Mountain Yangantau.

Another thing you need to know about Urals mountain is that Lake Aushkul is one of the most beautiful lakes in the southern of Ural region. It is sometimes called as the paradise for paragliders and the Bashkortostan locals. The lake itself is associated with a lot of legends and folk tales. The area had become famous since the 18th century. The reason for that is the extraordinary vases that are made of Aushkul jasper. The Aushkul jasper itself can be found on the big starcase of the Hermitage building. The lake are covered in jasper pebbles. It can easily be collected from the shores of the lake, although there are a lot on the bottom also.

In this lake there are many interesting activities to do. You can choose to swim or catch crabs or even go fishing. The west side of the lake is famous among Muslims. That is because there is a mountain called Ausch-Tau. The mountain itself has several graves of preachers of Islam. It includes one of an Arab sheik.  That is why the lake and the mountain are well known among Muslims.

For every 2-3 weeks a year, spring water will flow to the lake from a sacred source.  It is believed that the spring water is therapeutic. Also some believed that the water capable of maintain your youthfulness. That is also one of the main reason this spring is always crowded with people. People all around the world for many centuries have come to take the ‘healing water’.

The Burning Mountain Yangantau is located approximately 150 km from the city of Ufa. Ufa itself is the capital of Bashkortostan. The mysterious thing about the mountain is it erupts with hot gases and steam. But, it is completely not in the seismic areas and no relation with volcanic activities. The temperature of the mountain ranges from 37 to 150 degrees Celsius. No one knows for sure about how long this mountain has been burning and emitting hot gases. In this area you can take special baths. On the banks of the Yuryuzan River near Yangantau there is a special bath. It is a spring that is saturated with gas and also salts.