Only two days before this article was written, an earthquake with magnitude of 6.4 shook Kamchatka peninsula. The epicenter was only around 100 miles from a city. And it was only one of four earthquakes with magnitude of 3.0 or greater that happened around the area within the last 10 days. Thankfully, no victims were reported. However, it demonstrated how dangerous Kamchatka is.

Kamchatka peninsula is located in the northeastern part of Russia, between the Pacific Ocean and the Sea of Okhotsk. Although it spans quite a large area, it is inhabited by only hundreds of thousands people. Why? Because there are volcano eruptions, landslides, tsunamis, and earthquakes, among other natural catastrophes that unfold in the region. Seismic events occur regularly like a clockwork, which makes it unfavorable for permanent residency. 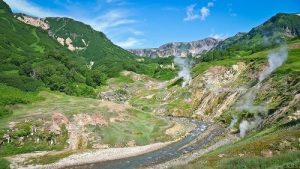 The Kamchatka peninsula owns some of the most beautiful and amazing natural tourism sites. It has the volcanoes of Kamchatka, a UNESCO World Heritage Site, and the Valley of Geysers, a concentration of hot springs which strangely sit right on top of one of the coldest place on earth. However, before you are going anywhere near those wondrous nature, you should check all facts about Kamchatka, the most hazardous place in Russia.

Kamchatka peninsula possess 700 km long volcanic belts which consists of around 160 volcanoes, including 29 active ones. The 29 active volcanoes are included in UNESCO World Heritage List sites. Klyuchevskaya Sopka, the highest volcano in the region, is also the biggest active volcano in the Northern Hemisphere. Some of the inactive volcanoes may erupt every now and then, including the Raikoke Volcano that recently explodes for the first time in 95 years. Volcanic phenomena is fairly common in the region.

Statistically, at least 30 very large eruptions (also called Plinian or Vesuvian eruption) that ejects more than 1 km2 of magma have occurred in Kamchatka peninsula during the past 10,000 years, in addition to smaller eruptions which may happen almost every year. This “accomplishment” means that Kamchatka is one of the most volcanically active places on earth.

Speaking about tsunami, the most prone places are island countries like Japan and Indonesia. In fact, the list of biggest and deadliest tsunami in the world are dominated by the two countries. However, Kamchatka peninsula may find its place on the list fairly soon due to the existence of the Kuril-Kamchatka Trench nearby.

The Kuril-Kamchatka Trench is a huge oceanic channel in the northwest Pacific Ocean that was formed during Cretaceous period. The crack causes frequent deep-focus seismic events, which may result in shallow earthquakes or huge tsunami. History book record shows that a chain of megaquake with magnitude of 9.0 that occurred in the area on November 4, 1952, triggered waves as high as 50 feet, devastated the region, and left an estimated 10,000-15,000 people dead.

Kamchatka landscapes are perpetually changing due to the frequent volcanoes and earthquakes. It may discourage many people from living permanently in the area, but it also provides incentives for people to stay away from encroaching its wilderness with pollution and land acquisition. As the result, Kamchatka maintains the highest population of bears in the world, aside of other wildlife creatures.

Bear population near Lake Kurile, a part of the Kronotsky Nature Reserve, is one of the most favorite sight for daring photographers and adventurous tourists. However, it is not the only one. Kamchatka is one of only few places where you can find the gorgeous-but-endangered Lynx in Russia. There are also bird colonies, sea lions, and killer whales off the harbor of Petropavlovsk. They are usually friendly, but there are also stories of tourists who are killed when they come too close. Tour organizers make it a priority to have experienced guides and security personnel when they bring visitors near Kamchatka wildlife, so tourists and photographers can sight-see in safety.

4. The Wonder of the Valley of Geysers

Among various sightseeing spots in Kamchatka peninsula, the most well-known and sought-after is the Valley of Geysers. Countless smokey geysers high up in a cold mountainous area provide picturesque scene which will tempt any adventurous soul. The Valley of Geysers is located in the Kronotsky Nature Reserve, which is also a part of the UNESCO World Heritage Site’s “Volcanoes of Kamchatka” group.

Although it offers great scenery and is one of beautiful places in Russia, tourists can’t easily access the location because of two reasons. First, you have to use helicopters to reach the location. Second, it is somewhat disaster-prone. In 2007, a massive mud flow submerged more than half of the valley, and caused the local government to ban trips to the area. Even now, you can’t go to the valley without an accompanying guide.

5. The Moon on Earth

Have you ever heard of Tolbachik? It is an active volcanic complex in Kamchatka that comprises of two mountains, the Plosky Tolbachik dan the Ostry Tolbachik. The name Plosky means “flat”, while Ostry means “sharp”. Both refers to the terrain of the volcanoes which look like a shield volcano with flat top and a stratovolcano with ridged top.

The location of Tolbachik is even more difficult and dangerous to reach compared to the Valley of Geysers. Aside of the volcanoes that are still active, it is surrounded by huge rivers and dead forests as the result of innumerable eruptions in the past. However, the frequent natural disasters also engender a moon-like topography. If you have seen a photo of the moon, then that is quite similar to Tolbachik. It is even said that the Soviet Union tested its moonwalker vehicle in this place prior to launching it to outer space in order to make sure that it can function well.

Visiting Kamchatka peninsula will open your eyes to the wonders of the world which may not be available in other region. There are so many experiences that one may get around Kamchatka’s unique nature, including but not limited to hiking, trekking, fishing, rafting, surfing, snowmobiling, skiing, kayaking, boat-touring, camping, and relaxing in hot thermal spring. In fact, Kamchatka is one of the most notable places in Russia for fishing salmon and trout. Living for sometime in the location alongside local resident is also an interesting experience, because they have distinctive cuisine that is made of local seafood sources.

Be that as it may, you have to note the season and climate to make sure that you are coming to Kamchatka in good weather. This article on all facts about Kamchatka, the most hazardous place in Russia, should have warned you of the necessity. Otherwise, it may prove to be a futile trip, because local government and tour group will not hesitate to call off any program at the last minute if the situation is less than stellar, so as to prevent any unwanted accidents.