If you are a fan of the chocolate family, then you must have heard of Ganache. The rich chocolate mixture is used as a glaze or drizzle, as well as filling for layering cakes. Ganache can also be eaten as is when you are in need of some comfort snack to lift your mood. Although Ganache mixture includes chocolate, but it is also quite unique compared to other types of glazing, fillings and snacks that are similarly made from chocolate. What are differences of Ganache from other chocolates? 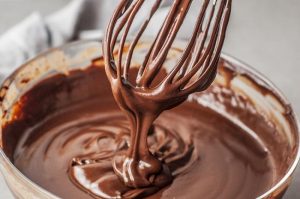 Ganache distinguish itself from other chocolates in several aspects. First, its overall composition is richer because it is mainly made from chocolate and cream. Second, it is a versatile item that can be consumed in a variety of ways, but usually marked as food for adults rather than for children consumption. Let’s learn more about them in this article.

Ganache vs Other Chocolate Filling

Aside of Ganache, we know several types of chocolate-based cake glazing and fillings. Let’s say chocolate fondant, chocolate buttercream, and chocolate mousse. Each type of chocolate filling has its own characteristics. They consists of different ingredients, and are created with different techniques.

Chocolate Buttercream is made from beating butter and icing sugar to a smooth consistency, with some melted chocolates as flavoring. There are also vanilla buttercream and colored buttercream (such as pink buttercream). They are good option to pad the middle of sponge cake layers and to decorate the top of the cakes. As decoration, they cannot be sculpted, but only strategically placed using piping bags. If you see birthday cakes with a lot of cream on the outside, then that is buttercream.

Chocolate Fondant is rolled icing with chocolate flavor that are known as main material to create smooth coverage over fancy cakes. Fondant can also be made in numerous different colors like buttercream, but they can be more easily sculpted. The most popular ones are white-colored and pink-colored fondant. Usually, you can see them on wedding cakes and petit four that are served in five starred hotels and formal parties.

Chocolate Mousse is significantly lighter than other types of chocolate filling. Mousse refers to almost anything that are made airy with whipped eggs. Whisk egg yolks and melted chocolate, mix in egg whites that have been whipped until foamy, then you will get Chocolate Mousse. You can also make Chocolate Mousse by mixing melted chocolate with cream that have been whipped to medium peaks. It can be used as fillings for various cakes, including substitutes for buttercream and Ganache.

Ganache is a mixture of two parts chocolate and one part heavy cream that can be thick or thin, with butter and additional flavorings like coffee. It can be made with more or less cream according to its purposes. Thick Ganache with a lot of heavy cream are usually preferred to reach smooth filling or rich drizzle over cakes. Less cream may be better if it is going to be made into Truffles instead of used as cake filling. There are also White Ganache that uses white chocolate instead of the usual dark chocolate or chocolate chips.

Various Cakes that can be Decorated with Ganache

Unsurprisingly, Ganache can be used to make dozens of cakes and chocolate-based desserts, as shown on the display cases of popular bakery shop in Moscow and around the world. Be it to create “double chocolate” sensation” or to create more elegant presentation, here is some examples:

So, are you interested to add Ganache on your latest cake creation? Before start mixing things up, do note that you should consider the consistency and textures before making Ganache. The consistency and textures may change depending on what type of chocolate (chocolate chips or chocolate cooking bar) used in the Ganache, the ratio of cream and chocolate in the ingredients, and whether the Ganache is used directly or being stored first in room temperature or chilled. If you are going to use it for filling, then you should look for smoother consistency with more cream. But if you are going to scoop Ganache for glazing and to make truffles, then the cream part should be reduced slightly.