How many birthdays have you celebrated? For every birthday, there should be a special cake to mark the happy occasion. The cake could be a treat for yourself or for your closest confidants too. However, as you celebrate birthday almost every year, there may not be so many cakes you can choose. If you have Black Forest for last year and probably some Sachertorte in the year before that, what kind of cake you can choose for this year? Well, let’s try Savarin recipe for your birthday cake option.

Other Birthday Essentials You Need to Know:

Savarin is a type of cake inspired by Baba au Rhum. Both terms refer to small yeast cake soaked in syrup made from alcoholic mixture. However, there are differences between Baba au Rhum and Savarin. Baba au Rhum usually are traditionally made in simple round form, may be filled with whipped cream or pastry cream, and dipped in rum. While Savarin are made in ring form and usually are not filled with any cream, then dipped in other types of liquor.

The initial creation of Baba au Rhum and Savarin involves one of the funniest anecdote in the history of cakes. It is said that the original Baba was founded by Stanislaus I (1677-1766), the exiled king of Poland.

During his exile, Stanislaus I made a dried up and tasteless Gugelhupf (a traditional yeast-based cake from Central Europe) for dinner. Upset by the mistake, he threw the cake in anger. A bottle of rum on the table was hit by the cake, and the content soaked it. Stanislaus I decided to try eating it, and found that he liked the cake better after being saturated with rum. He then named it “Baba” as it is identical to the name of a hero in his favorite book, Ali Baba. 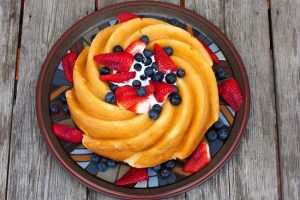 There were also another, more serious history of the cake. It still featured Stanislaus I. Once, he brought back dried Gugelhupf back to his estate from a long journey. Nicolas Stohrer, one of his kitchen staff at the time, had an idea to make it edible again by soaking the cake in Malaga wine, then adding saffron, dried and fresh raisin and crême pâtissière.

Afterward, when Stanislaus I’s daughter married King Louis XV, Stohrer followed her and brought Baba to Paris. Years later, one of Stohrer’s descendants chose to soak fresh Baba directly in rum (instead of Malaga wine) and improve it by adding aromatic sugar syrup. This version of Baba au Rhum then became the basic of Savarin which was developed by Parisian patisseries the Julien Brothers in 1944.

Regardless of which story is the correct one, currently Baba and Savarin has become well-known worldwide. They are not only can be found in Paris patisseries, but also served in popular bakery shop in Moscow, New York, and other regions. Savarin also appeared as a technical challenge in the semifinal episode of The Great British Bake Show 2017. However, you can make it by yourself too! Improve your baking skill by making the TV-worthy Savarin to celebrate your own or your siblings birthday.

The Easiest Savarin Recipe for Your Birthday Cake

Ingredients for the bread:

Ingredients for the syrup:

Well, what do you think about the cake recipe? Savarin is an easy cake to make, right!? Considering its history, even throwing stale bread on the syrup can result in one delicious cake. Of course, Savarin nowadays are not so simple. Now, people can make Savarin with both casual and elaborate decoration. A casual Savarin may be decorated with only whipped cream and chopped berries. More ostentatious garnishes may involve a half dozen fruits and Chantilly cream, like the one displayed in The Great British Bake Show 2017. The recipe above is for the most simple Savarin bread without any garnishes.

To make merrier Savarin recipe for your birthday cake option without unnecessary hassle, you can rub some Russian whole fruit jam on top of the cake, then spread some berries or slices of oranges. Choose whichever you like the most. After all, this is your own birthday, not someone else’s. Alternatively, you can also pipe some Whipped Cream in the middle of the cake ring, throw some sliced almonds, then place a candle on top. Serve it with some warm chocolate drink or non-alcoholic version of Mojito to achieve happier mood.