Among Russian juicy chocolate collection, Ganache holds a special seat for its rich and decadent quality. However, it actually does not originally created in Russia. The word “Ganache” itself is a French term referring to a smooth and velvety mixture of chocolate and cream.

Ganache is commonly made by mixing two parts of chocolate and one part of cream, blended until smooth. Butter can be added to make it shinier, smoother, and more easily sculpted when you use Ganache to glaze cakes. Liqueurs or vanilla extracts can be added if desired, to improve its tastes as cake fillings. The end result may differ in textures and consistency depending on what kind of chocolate and cream is used, the ratio of chocolate and cream, the temperature when Ganache is served, and what other ingredients are added into the mix. Its versatility distinguishes Ganache from other types of chocolates. 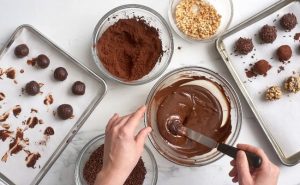 Nowadays, Ganache appears almost everywhere. It may be made into truffles, drizzled over Bundt cake, filled in Tiramisu layers, or decorated birthday cakes. Popular bakery shops in Moscow, New York, Sydney, Milan, and other metropolis may serve them daily or by request for the masses. Certified patissier and chocolatier also provide Ganache to complement fancy Russian chocolate cakes and petit fours in private parties.

You too, probably have made Ganache once or several times in your own kitchen. However, do you know what is the story behind Ganache? Its origin is actually disputed between two neighboring countries in Europe. Depending on whether you are asking people from Switzerland or France, the answer may differ.

People from Switzerland claims that they have been using Ganache as the core of Truffles for hundreds of years. However, they could not pinpoint for sure who is the creator and when it is created. On the other hand, the French have collected some charming stories about the creation of Ganache.

The first story about Ganache from France said that it is invented around the year 1850 in the Maison Siraudin. Maison Siraudi was a confectionery shop at the corner of the Rue de la Paix and the Place Vendôme which was opened by French playwright Pierre-Paul-Désiré Siraudin. The name of “Ganache” for chocolate and cream mix was taken from Les Ganaches (“The Chumps”), a popular vaudeville comedy by Victorien Sardou. This background was mentioned in Oxford English Dictionary (3rd edition online, 2015) and Larousse Gastronomique (Third English language edition, 2009).

The second story about Ganache from France is somewhat of an anecdote. Around the 1920s in the kitchen of French chef Georges Auguste Escoffier, an apprentice tried to make a pastry cream. However, he mistakenly poured hot cream into a bowl of chopped chocolate rather than the bowl of sugared eggs. Upset of the silly apprentice’s error, Escoffier yelled “ganache” which literally means “fool” in French. He took over the bowl from the unfortunate apprentice. He thought that if the mixture is stirred smoothly then he could reuse it to coat pastries or pour it into baked pastries like chocolate tart. Instead he found out that when the mixture is cooled and hardened, he could make it into balls that looked that truffle mushrooms after he rolled it in cocoa powder.

For your information, truffle mushrooms are one of the most expensive food products in the world. It is very hard to farm them, because they only live inside tree roots that grow on very specific kinds of soil and tree. They cannot be cultivated easily like champignon, enoki, or oyster mushrooms. Each kilo of truffle mushrooms may cost around €2,000 to €2,500, or about €57.14 per oz. Comparatively, chocolate truffles with Ganache core are far cheaper. A box of luxurious 24 pieces (16 oz) Dark Chocolate Truffles from Godiva is labelled around €44.25. Low-end brand of Chocolate Truffles can be even more affordable. You don’t even need an arm and a leg to make it by yourself with ordinary brand of chocolate chips or chocolate cooking bar as main ingredient of its Ganache core.

Ganache and Truffles are kind of twin with the same birthday date but born in different hours. The same recipe of Ganache can be used as frosting for cakes and even Russian cupcakes. But if you let it cool and harden like Georges Auguste Escoffier did, then it may turn into Truffles. Here is one versatile Ganache recipe to show you how Truffles are made.

See, Ganache which is supposed to be made for cake glaze can easily be turned into Truffles. However, if you want to make Ganache for cake fillings or dipping sauces, then you may want to use different ratio of chocolate and cream to reach different consistency.

Soft Ganache usually is made from one part of chocolate and two parts of heavy cream. The direction is quite similar. Boil heavy cream over low heat until nearly boiling. Remove it from heat, then add chopped chocolate. Wait for 3-5 minutes, then stir it well until smooth. Serve it warm or on room temperature along with some Savoiardi or other type of biscuits.