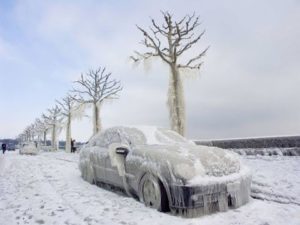 Every place have their own uniqueness. From dry – hot city, into the  freezing city even makes your eyelashes freezing. As a big country, Every cities in here are not having same culture and don’t have similar way to live in the city. During annual freeze across everywhere in Russia, the temperature of the weather were really intolerant and inhospitable. For challenging climate, The Russian needs to adjusted how they living for survive from the climate.

Because of the weather, they are unique, some of them are possible to walk without jacket or suit, others need extra layer of your cloth if you don’t want to keep hugging yourself when walk. Today, we would like to share 7 coldest places in Russia that will make you freezing! So what are you waiting for? Lets go!

Because of the disastrous temperature, villager started to realize that the public thermometer started to malfunction after temperature dropped to -67C after steadily hanging below -60C for weeks. What makes this village become so cold is the location itself. Ever imagine days when the sun at your head? Here, days can be short as just three hours in winter.

The Khabarovsk is the second largest city in Russia Far East after Vladivostok. These place is a popular stop on the Trans-Siberian Express. Don’t worry, Khabarovsk is not coldest as you think in every place. They still have more accessible place for us to hang out. At the winter, the temperatures outside can dropped up to -20C , cold enough to freeze the upper layer of the river, and once the weather change, the sculpture of the ice will stay there until the spring come. These city still lucky because unlike any other contemporaries, they still gets more daylight and more sunny days even from the Moscow.

It is one of the coldest city in the world. Just like Oymyakon, the average temperature in here is about -40C until -50C. Who can survive outside when the temperature is bizzare? For us, maybe we still can hold 3 or 4 days stay inside the home, prepare the ration or just hanging around outside for a short time. But how about the resident in Yakutsk? Around 270,000 people in this city faces the extreme weather year by year, battle with the extreme weather. This temperature is so low even can glasses your face and freeze the moisture of your skin if you stay outside for too long.

Remember old ideas, how to keep your food edible longer? With a salt, sugar, or with the ice. The same thing happen here and it will make a little problem when someone died. It takes several days to bury a body, as bonfires must be lit to thaw the ground slow but sure. Until that, the graves can be dug. As winter comes from October to April so the resident must prepare if they don’t want to freezing. To face the winter, residents will wear clothing made by fur. Fur in Russia is expensive , even have the same 3 months expenditure . Uniquely, in Russia the bank will give the loans special to purchase the winter furs.

Do you know, the Norilsk is one of the most polluted city in Russia? Filled with industrial company, is located in north of the Arctic Circle. The temperature of this city is about -10C and the have terrifying almost 130 days of snow storms every year. In an isolated city in Siberian where the 175,000  stayed in mining town  which is the largest deposits of palladium, nickel, and copper in the world. This city is very unpopular for foreigner and one of the closed cities for tourist. This city also known as former Gulag , a place where 700,000 prisoners were sent between 1935 and 1956. This city can reach peak temperature for -55C, cold enough for making permafrost for anybody who stay outside for too long. Because of the terrible weather, kids only allowed to play in indoor playgrounds.

Form near Yakutsk, there is a place called Verkhoyansk, and it’s a little village in Russia. Same like Yakutsk , this village is the nominator for the coldest place on earth. Verkhoyansk just have about 2,000 residents and its going down year by year. The most record for this village for temperature was below -60C. Verkhoyansk is well known by the political prisoners who were sent here in exile. What makes this village terrifying is the villager was sits on a layer of permanent permafrost over 150 metres deep in parts. Building in here were used for the concrete and steel stilts, so when top layer of permafrost thaw in warmer months, the construction in that village will remain stable. When summer comes, villagers will hunt animals that good to be eaten and stockpiling for winter that is stored in their basement, which act as natural freezers. I hope when you want to go there, make sure you come at summer period where the temperature still quite friendly.

Dudinka is a very unique place in the earth. Same like another contender in Russia’s unfriendly places for live, Dudinka offers freezing temperature for the villager – even just the spit can freeze before hits the ground. Climate for the sub-artic ensure the winters are long and temperature can dip below to -50C, however, usually the temperature in this place steady around for  -30C. Thanks God because the place still enjoy the summer period, while the time is running so fast. At summer, the temperature can hit up to double digits, which is nice if  we compare to another freezing city in Russia. But it just need couple of months until respite from sub-zero weather. Didinka still has locals which still keep their tradition and the culture. This place is the host for “the Day of the Reindeer Herder”, where the festival of indigenous populations dress up in traditional costume and race reindeer. It also the home for the big Soviet radio transmitter. It is the second tallest structure in the former Soviet Union, number one in EU.

Have you ever heard about the city called Dikson? Dikson is one of the most northern port in the world. Because of the geography, Dikson sits on the Kara Sea in Russia’s far north, and the element of this city is the ice. The place is the contender for the eternal winter everyday, also have the black polar nights here last for months. Average winter temperature for the city is around -20C although it frequently hits for almost -40C. What makes this city terrifying because of the snow storms which will hit the city.