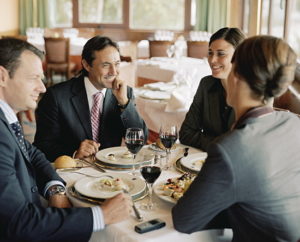 Russia is a multicultural country that is influenced by various cultures. One that dominates there is the culture of Greek Orthodox Church that has penetrated into the joints of the life of the people of the Red Bear State. In addition, Russian diversity is also enlivened by the Orthodox Slavic culture, the Islamic Tatars, the nomadic Buryat tribe, and paganism.

Russia’s tourism sector has grown rapidly since the late Soviet era. The most popular tourist destinations in Russia are Moscow and Saint Petersburg – both capital and former capital cities. Russian bussines dining etiquette are unique.

1. Eat whatever you want

Russians never set a special time to eat lunch or dinner. Their meal schedule varies from family to family, as well as individual. The restaurant can present various types of dishes without a certain time rule. This is something that will not be found in other countries, especially Europe.

When inviting guests, the Russians are also quite flexible. If you do not arrive on time at dinner, do not worry. Because you can still eat dinner even though the meal together has ended. In addition to flexible in terms of arrival, you can also eat what you like. The composition of the dinner menu was not stiff. That is, Russian people do not always provide appetizers, main menu, and dessert.

However, on the table there is usually soup, salad, meat or fish, as well as complementary foods, such as rice, potatoes, or lapsha (Russian spaghetti), and desserts. You may not eat all the dishes on the table or even choose to dessert before the main menu.

There is one important unwritten rule when eating with the Russians. Mothers often tell their children and say, “Do not eat without drinking.” That is, during a meal should be interspersed with something to drink, or can also be accompanied by soup. This is so that the food is more easily digested. So, do not be surprised if a cup of hot tea often accompanies the main course. Read other russian fact when they eat.

3. Meat and bread needed to survive

Russians can barely eat meat. Meat is almost always there in the lunch and dinner menus. They are used to eating meat every day. Despite the increasing number of vegetarians in the country, it is still hard to find a middle-aged Russian vegetarian. The long, cold winter of Russia makes the Russians need a lot of calories to endure. That is why, bread almost always accompany all kinds of dishes. This habit may be driven by memories of hunger in childhood. The grandmothers in Russia often say that bread is “the most important food”. Therefore, watermelon fruit they can eat with a piece of bread.

4. Deaf and dumb when eating

There is a famous phrase that mothers often say in Russia to their children, “When I eat, I am deaf and dumb.” Actually, there is a plausible reason behind this advice. When eating while talking, we can choke. Perhaps this is the reason why Russians seem to be ignoring their surroundings at mealtimes: this rule has been attached since childhood.

Guests are very important people at dinner, and the host will always try to serve his guests as well as possible. They are too much to serve the guests to make feel uncomfortable. Its feels almost like eating in a restaurant, the host only serves, but he does not eat. Please read Russian etiquette

6. How to use cutlery

Most Russians eat with knives and forks. They consider taboos to be voiced at meals, nor should they directly use a spoon to drink tea or leave it upright in a glass. Usually they only eat dishes, not using a bowl.

7. Putting hands on the throat

Attending a Russian banquet, should give praise to the food served, and need to eat it a bit more. Usually the citizens of Russia declared already satiated by putting hands on the throat. In addition, the other taboo eating custom in Russia is to never lick food from your cutlery, especially knives. It was considered rude. You can also read Russians loves for vodka

8. Hand is placed on the table

The Russians consider good eating ethics when the hand is placed on the table, not placed on the thigh. In addition, the fork must be in the left hand and the knife is placed in the right hand. If we are taught to always eat food on a plate, the Russians are even encouraged to leave little food. It is considered a polite and respectful act of the host. Because with the remaining food, the host provides enough food so that we are full and can not afford to spend it.

If you are in Russia do not mix your alcoholic drinks with anything even ice cubes. Adding anything into your drink gives the impression of damaging the purity of the drink. There are other important things to note, if you are offered a drink try not to reject it. That’s because offering a drink to someone is a sign of trust and friendship, so it’s a good idea to take it. Although it is still at 09.00. And in Russia too ancient tradition is still very thick, especially when the traditional date. Read also Russians and alcohol and Russian Unique Culture