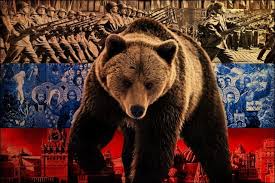 Bears are one of the symbols of Russian culture, appearing in jokes, folktales, stories, comics, and even as an Olympic mascot back in 1980. It was considered as a candidate for the official Russian symbol after the dissolution of the USSR, but in the end, the parliament opted to use the double-headed eagle from the Tsarist rule as the national symbol.

Bears began appearing in other symbols around the country. Some joked that “Russia is full of bears” to refer to this phenomenon, and others joke back by saying “Russians ride bears to work while drinking vodka and playing balalaikas (an instrument that looks like a guitar)”

How bears became known as one of the symbols of Russia

Due to Russia’s forested area in the past, the local people were very familiar with bears, and thus bears appear in their folklores and stories. Bears were a symbol of respect usually attached to a folktale character, carrying an aura of a powerful, good natured, but slightly dumb animal with a certain charisma to it. The bears also have the image of a kind neighbor and a guard, and were used in some Russian emblems and symbols.

Before the rule of Peter the First, there are several known prominent symbols depicting the images of bears. The stamps from the rule of Ivan the Terrible, the Big State Stamp that appeared in late 1970, have bear images that kept on changing until they took a final form in 1672 and was listed in the Title Book among other land emblems. Three cities also made the image of a bear as their territorial symbol, the Novgorod, Yaroslavl, and the far away Perm.

The Novgorod coat of arms depicts a pair of bears standing on its hind legs on either sides of an extravagant golden throne, while two fishes can be seen in the blue colored ground. This combination of elements carries the political and symbolic meaning of the guard.

The Yaroslavl coat of arms was inspired by an event that happened to the prince Yaroslav of Rostov. During a missionary and military campaign, as the soldiers go for a brief moment in the forest to check the situation, the prince is left alone near the river. Suddenly, a bear jumped out of the thicket and attacked the prince. The prince is only armed with a battle ax, but when the soldiers came back, they see Yaroslav standing with a dead bear near his foot and a bloodied battle axe.

To commemorate this, the coat of arms of Yaroslavl depicts a bear standing on its hind legs and wielding a battle ax. Others claim that this coat of arms was inspired when Pagans released a horde of savage bears as they view the prince as a worshipper of ‘ancient bear cult’. However, the prince and his volunteers did not back away or flinch from the beasts, and slaughtered them. The coat of arms were said to be a tribute to this bravery. Nowadays, the coat of arms carries the meaning of a “role model”.

Meanwhile, the Perm coat of arms is more simplistic and restrained. It depicts a walking bear at the bottom, the book of Gospel in the middle, and a cross at the top, all placed on a royal red background. This emblem was approved by Empress Catherine in 1783, and the design remains the same throughout the years. The color red, popular in Russian heraldry, symbolizes courage and confirms the capital status of the city. A silver bear in movement affirms that the city is has an extensive territory, rich in ores and precious metals, with a high prospect for the future. The book of Gospel and silver cross symbolizes enlightenment and affirms the role of Christianity in Russia. Nowadays, it also carries the meaning of “role model”, similar to the Yaroslavl coat of arms.

In the 18th-19th century, more coats of arms depicting bears appeared. This was partially inspired by the Yaroslavl coat of arms, and has quirks and peculiarities depending on the natural state of the land. In the coat of arms of Ust-Sysolsk, it depicts a bear in its den, while the coat of arms of Sosnitsy has a bear climbing a pine tree to get honey.

Nowadays, the bear is sometimes used as a political joke, a symbol, or a figure in a humor caricature.