Eid Al Fitr in Ukraine have in common with other countries. Before discussing about the celebration of Eid al-Fitr in Ukraine, let’s first learn how Islam in this country adjacent to Russia. See also History of Muslim Culture in Russia

Ukraine is The Largest Country in Europe

Ukraine is a country in Eastern Europe. The country is bordered by Russia in the east and northeast. The northwestern part is bordered by Belarus, while the western part borders Poland and Slovakia. Hungary, Romania, and Moldova in the southwest, the Black Sea to the south, and the Azov Sea to the southeast. Ukraine and Russia are now fighting over the Crimean Peninsula annexed by Russia in 2014. Nonetheless Ukraine and many international communities recognize it as part of Ukraine. Ukraine is the largest country in Europe and the 46th largest in the world. Ukraine becomes the 32nd most populous country in the world.

The History of Islam in Ukraine

Having a strategic position gave opportunities for Ukraine to recognize various cultures and religions. Islam is one of them. This country once led in Islamic leadership. In the 15th century, Ukraine became part of the great Islamic Caliphate, Ottoman Turks. That was the first time Islam had wriggled in the area that had once been the Greco-Roman territory.

Starting from the Crimean City, Islam spread throughout the country. In the mid-fifteenth century, the Crimea became the center of Islamic da’wah, dominated by the Tartars. The Crimea, then called the Crimean Tartar Khanate, was led by a priest under the control of Ottoman Turks. Mosques and educational institutions also emerged until the 18th century before the Russian empire stormed the Crimea. Read also Best Places in Moscow for Muslim Traveler.

Russia gave black history for Crimean citizens by carrying out massacres. They still remembered that until now. In the 19th century, there were more than 161 thousand Muslims left this city. The number of Muslims shrank by 1917, accounting for only a third of the Crimean City population and only 11 percent in other cities of the country.
The condition of Crimean Muslims is getting squeezed during World War II. Tartars were accused of being Nazis until they were mass deported to Central Asia and other countries of the Soviet Union (Russia). As a result of the expulsion, recorded 45 percent of 200 thousand Crimean Muslims killed by starvation and disease.

But in 1967, the Soviet Government were abolishing allegations related to the eviction action. Then they allowed Muslims to build settlements in the Crimea, even though the repatriation was only realized in 1989.
They remain there as Ukraine breaks away from the Soviets and declares independence in 1991. This is the first Muslim community to spread Islamic propagation throughout the Ukraine. Crimean region is still very special until now. The city, 850 kilometers south of the Ukrainian capital, Kiev, has many Islamic heritages. You may read also Halal Restaurants in St. Petersburg 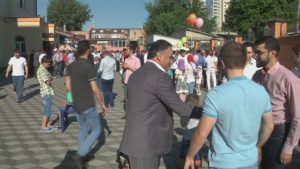 Since Ukraine’s independence, the number of Muslims continues to grow. Currently, there are about two million Muslims from the total population of Ukraine of 47.5 million.

Not only from the Tartars, Muslims come from immigrants and natives of Ukraine. Although Muslims live as a minority, the Ukrainian rulers give religious freedom to their citizens.

So that Muslims can freely practice worship, celebrating holidays, and other religious activities. Ukraine also has more than 200 mosques and 20 Islamic centers.

Most Ukrainian Muslims live in the Crimean region. The largest cities of Ukraine, namely Kiev and and Donetsk, also have centers of Islamic activities. Several Muslim newspapers were also published there. In addition to Maulid and Isra Mi’raj, Ukrainian Muslims also celebrate Ramadan. Similarly Eid and Eid al-Adha. During Ramadan, Ukrainian organizations held many activities. See also Popular Foods in Moscow During Ramadan 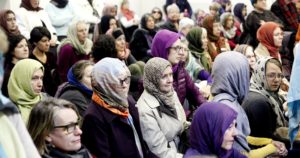 Not a few converts who bersyahadat during Ramadan. Ukrainian Muslims have even made strenuous efforts to educate Muslims and non-Muslims about Ramadan. After the non-Muslims received brochures on Islam and Ramadan spread, many of them embraced Islam in Ramadan.

In support of religious freedom, the Government of Ukraine made the Eid Al Fitr in Ukraine as a national holiday. The Ukrainian government endorsed this decision on Wednesday, June 25, 2014. This proves that Muslims in Ukraine are actually growing in number.

Muslims around the world celebrate two big days each year. Namely to mark the end of the holy month of Ramadan known as Eid al-Fitr. While the other as a marker of the end of the haj season or called Eid al-Adha. Muslims perform Eid prayers at Ar-Rahma Mosque in Kiev. See also Popular Foods in St. Petersburg During Ramadan 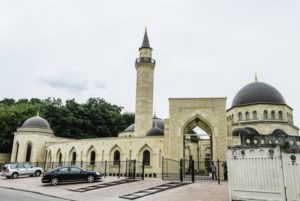 Eid Al Fitr which has become a national holiday in Ukraine, is a great appreciation for Muslim Ukraine. Because Ukraine is a vast country, each region has its own Eid Al Fitr celebration. Just like other countries, Ukrainian Muslims perform Eid prayers in the morning. They perform in the great mosques in their respective territories. As in the Kiev, the implementation of Eid al-Fitr prayer is at the Ar-Rahma Mosque.

After the prayer, the Ukrainian Muslims will gather with their families and relatives. They shook hands, enjoying typical Ukrainian food, even exchanging gifts. In the center of each region, held a festival to enliven Eid Al Fitr. The festival is a reading of Al-Quran, cultural bazaar, food bazaar, and religious songs performances. To support the festival, the region leaders will give a speech and congratulate the holiday to Muslims.