If you are a a fan of chocolate or someone with sweet tooth, then you surely have heard of the Sachertorte. The decadent cake consists of chocolate sponge cake with a thin layer of apricot jam on top which then being covered in dark chocolate icing all over. To make it even more enticing, traditionally, Sachertorte is served along with unsweetened whipped cream on top or on the side. 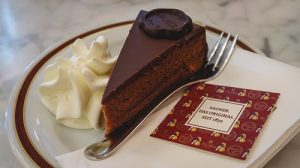 Since its inception in 1832, “the queen of chocolate cake” has become known as an icon of its birthplace, the city of Vienna in Austria. The bitter legal dispute related to the trademark of “Sachertorte” between Demel Bakery and Sacher hotel -both are landmarks of Vienna- is also widely discussed in various mass media. Consequently, as the Sachertorte recipes evolve and spread all around the world, it may be called by another name so as not to complicate the trademark feud.

This is the case with Sachertorte in Russian version which is now known as “Prague Cake” and widely sold among popular bakery shop in Moscow. The recipe is developed by Vladimir Guralnik in the pastry shop of the Moscow restaurant “Prague”, and it is made with relatively longer process and richer ingredients compared to the original Viennese Sachertorte. Read the article below to learn further about Sachertorte in Russian version; what makes it different from Vienna and how to make them.

Although most of the ingredients and directions on how to make Sachertorte has become known all around the world, but the authentic Sachertorte recipe remains a well-kept secret amid the feud between Sacher Hotel and Demel Bakery. Still, many people can’t help but create imitation recipes which generally comprises of these steps:

Ingredients for the cake:

Ingredients for the glaze:

Both Sachertorte in Russian version and in Viennese version uses apricot jam. However, unlike the Viennese Sachertorte, the Russian Prague Cake also needs a lot of cream. Well, it just goes to show you how much Russians love their homegrown dairy products.

Ingredients for the cake:

Ingredients for the sauce:

Ingredients for the glaze:

After looking into the recipe, you surely can determine that there are various points that distinguish the two. First, Sachertorte in Russian version requires a lot of cream, while the Viennese doesn’t use any cream at all. Second, the two cakes make use of rum (or other liquor) in different steps. You can mix it with Apricot jam for the Viennese, while you will need to soak the cake with it to make the Russian one.

Lastly, there is another point that differ the two cakes. It is about how many sponge chocolate cake layers are needed. In the original recipes above, the Viennese Sachertorte is only cut in half, while the Russian Prague cake is cut into 3 layers. However, you can actually make them in both 2 or 3 layers with approximately the same amount of ingredients and the exact similar step-by-step. After all, your preference is more important while making any cake than the authenticity of the cake recipe itself. Just make sure that you don’t add as much layers as Napoleon cake, the Russian version of Mille-feuille, because they may crumble and the result will not be as good as it should be.