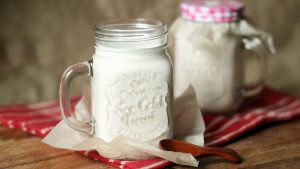 Russia is one of the popular country people want to know about. It has its own charm, also has so much sector we can learn about. Russia is also famous for its cuisine. Russia has a lot of special food with Russian touch, such as Pelmeni, Blini, Borscht, and dairy product also known as the Russia’s feature.  Dairy products have an important role in Russian foods. Almost all Russian food has it taste of dairy products.

Milk is common dairy product in the world. It’s not like only Russia has it. And all milks are has no difference, but here in Russia, you may find milk in every stores in the country. You may find a shelf long milk and also fresh milk in a bottle which only last for a few days. Even all the milk products are pasteurized; you may find the raw one in the local store. Beside we can buy the milk from the store, we also able to order the milk from the online shopping websites in Russia.

Baked milk or also known as toplenoe milk is a traditional Slavic drink. Other people from different country almost know nothing about this dairy product. We can keep this milk longer than the normal milk. It also has a smooth taste with beige color. It cooked with prolonged heating instead of boiling. In the old day, it was prepared for the entire day. You may find this product in all stores, especially in the best shopping place in Russia. If you don’t want to go outside, you can just sit and order it from the online shopping websites in Russia.

This dairy product was mainly made for the soldier to simplify the food carrying processes back in World War II. The sweet condensed milk also called as sgyushyonka  was produced for the citizen first in 1950 and become popular until now. Since it first mass production, condensed milk has been kept in Russia’s food state reserve. You may find the menu on the best shopping place in Russia.

Sour cream is also a common dairy product in many countries. What makes it different are that the sour cream in Russia is the one of the important parts of Russian Cuisine. Sour cream that also called Smetana is usually made from fat cream with fat content of 10 t0 58 percents. This sour cream is always took an important role in the Russian cuisine such as soup and dessert. This sour cream are available in the online shopping websites in Russia and also in the local store as the best shopping place in Russia.

Slivki is milky cream which available both in packets and bottle with a limited shelf life. Just like other cream in Russia, Slivki also contain of 10 – 35 percents of fat. Slivki are cream made from only milk without other ingredients. You may buy this cream from the online shopping websites in Russia.

Tvorog is also known as cottage cheese or farmer cheese. Its form is similar with Russian homemade cheese. It made from the fresh milk without sugar added. It commonly has the salty taste and scrambled form and granular texture. We may only find this tvorog in the local Russian store. This tvorog commonly served with jam. Most of the Russian cuisine has tvorog as the ingredients.

The next dairy product is Kefir. Kefir is dairy product made fermenting milk with a certain grains comprised of bacteria and yeast. It’s commonly serve in the hospital and kindergarten menu. Kefir is also good for losing weight that made people who want to lose their weight consume kefir in their menu. It always drinks without any processing. But Russian also uses kefir to marinated shashlik, to make bliny and cold okroshka. Kefir also features on Russian tables. Because kefir is popular, so you may order it from the online shopping websites in the Russia.

Ryazhenka is the common homemade drink. Almost all Russian has it at home as their drink snack. Ryazhenka is made from baked milk which shimmering in a low heat for several hours. Russian usually done it at home by mixing the baked milk with the sour cream and leave it for an hour. You don’t need to go to the best shopping place in the Russia and you just need the ingredients and make it at home.

It’s is a traditional fermented drink popular in Bashkiria, Kalmykia and among Nomadic people. Kumis has a low alcohol content and bittersweet taste. It also called as a super food, because it has health impact. This drink make the metabolism of the body improves and giving an extra energy to us. You may find it at the local store. Local store is always the best shopping place in the Russia.

This dairy product was first made in the soviet era. It taste like yogurt and commonly mixed with syrup and berries for a delicious drink. You can buy this in the local store or order it by the online shopping website in Russia.

Finnaly, that some of the Dairy product that may can answer the question. The explanation above may answer everything you wanted to know about dairy products made in Russia.