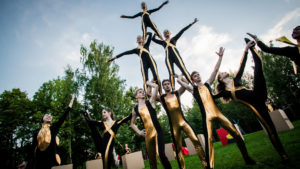 St. Petersburg is one of the cities in Russia. The Venice of the North is adorned with beautiful bridges, buildings with charming architecture and beautiful landscapes will spoil the eyes of tourists. Not surprisingly, this city is visited by many tourists from various parts of the world. St Petersburg is becoming a UNESCO recognized historic city as a World Heritage Site. There are some Unique Russian Things to Find in St. Petersburg.

Behind the splendor of this city, it turns out St. Petersburg also keeps a variety of unique and interesting facts. Here are some Unique Russian Things to Find in St. Petersburg. Read also Best Places in Moscow for Muslim Traveler

1. The City of Peter the Great

Peter the Great is the man who founded St. Petersburg in 1703 during the Great Northern War. Peter the Great captured Nyenskans and immediately replaced the castle. On 27 May 1703 he laid down Peter and Paul Fortress, who became the first brick and stone for the city’s buildings.

Originally this city was called Petrograd. Then became Leningrad until finally became Saint Petersburg. It was the Capital of the Russian Empire From 1721-1730 and then from 1730 until 1917.

2. The bridge opens the Neva River

While taking a walk in the summer, it is imperative to see the bridge open at night. This bridge is not just a tourist attraction. Petersburg is one of the largest ports in Russia. When the bridge open, the ship can go through the River Neva.

3. Cycling on the river side

Although the number of parks in Saint Petersburg is not as much as Moscow, the riverside at Piter is the perfect place for cycling. Especially in the White Night period (May-July). In recent years, the bicycle infrastructure has been improved a lot. You can find an English bike tour and a bicycle rental in the city center.

St. Petersburg celebrates the unique festival of the White Night Festival. The festival begins in May with the “White Night Star” at the Mariinsky Theater and ends in July. St. Petersburg is the world’s most northern city with a population of over 1 million, and is located at high latitudes so the sun does not quite drop below the horizon to make the sky dark. This is the time when the day becomes longer and the sun shines until midnight and then rises in 3-4 nights, so the night is not dark.

4. Drinking beer by the river

There is actually a ban on drinking alcohol in public places. But there is nothing more fun than drinking cold beer with friends during the hot day. The jetty on the Leitenant Schmidt Dyke, near the Mining Institute, is a favorite spot. But be prepared to hide your bottle if the police pass by! You may see also Best Places in Russia During Winter

5. The town center is full of Saint history

Petersburg is very interesting for those who want to know the history of Russia. Its because this city was once the capital for two centuries.  St. Petersburg has many ancient houses from the late 19th century and early 20th century are still maintained to this day.

Saint Petersburg is often called Venice in the North. This city consists of about 40 islands.  Peter the Great, the founder of this city, initially banned the construction of the bridge and wanted everyone to travel by boat. Now a boat tour becomes a must for tourists.

Kolomna is one of the downtown districts. The closest underground stations of this district are Sennaya Ploshchad, Sadovaya, or Spasskaya. Pass by the Canal Griboedova to the heart of Kolomna, Saint Nicholas Cathedral (Nikolsky) and the Mariinsky Theater Building.

The building was once a school, before being demolished due to the construction of the second stage of the Mariinsky Theater Building.

You can feed the birds near the Nikolsky bell tower.

8. See the city from above

There are no tall buildings in the center of Saint Petersburg except the cathedral. From 1844 to 1905 there was a rule that the building should not be higher than the tsar’s dwelling. The Tsar is the Winter Palace which is now the world-famous Hermitage Museum. To get an awesome view of this flat city, you can climb the pillars of Saint Isaac Cathedral or Smolny Cathedral. Read also Best Destinastions in Russia

Communal apartments emerged after the revolution of 1917. That was when middle class flats were distributed to peasant or labor families. Each family has its own bedroom, but has to share a kitchen and bathroom. These apartments are still in the city center today. They witnessed the living history. Interestingly, these flats are also popular among young people, even expatriates. Of course, the best party is there.

This charity is the first charity shop in Russia that opened in May 2010. Yulia Titova is the owner the store. Business model in England and the United States was inspiring her to open the store. So she established a similar thing in Saint Petersburg.

The next Unique Russian Things to Find in St. Petersburg is the Upsala Circus which is another charity project. At this circus show, you will find children from social risk groups. They end up having a healthy option besides their street lifestyle and become a great circus artist.

This group has been established for 14 years. They usually appear to make performances every weekend. They held an art and theater festival called “Flying Kids” in September and toured Europe every summer.

Anna Christin Albers set up all nightspot entertainment. She opened the Dacha bar ten years ago as a solution to the lack of affordable sociability in the city. The bar on Dumskaya Street begins the emergence of independent bars and clubs, one of which is Fidel. They offer sensible alcohol and quality music, from The Beatles to the Blur, as well as rock and pop hits from the 70s and 80s.

Anna’s other place is the Poison karaoke bar. The bar is now in three locations, one of which carries the concept of an anti-smoking bar on Jalan Rubinsteina 13. This bar only has English songs. There is also the summer place of Dunes on Ligovsky, an open-air “beach bar” just ten minutes’ walk from Moskovsky Train Station.

St. Petersburg is often called the cultural capital of Russia.  You will feel it especially in the summer. The festival is held every weekend and even difficult to choose which one to visit. You can find all kinds of festivals, from classical music to jazz. Read also Best Foods in Russia During Summer

Saint-Petersburg is the capital of the Russian coffee. The city’s people are very crazy coffee. There are plenty of coffeehouses around town with a great variety of coffees. Coffee Rooms is a very popular place among residents and now has 7 branches of cafes around town. Read also Popular Inexpensive Restaurants in Russia