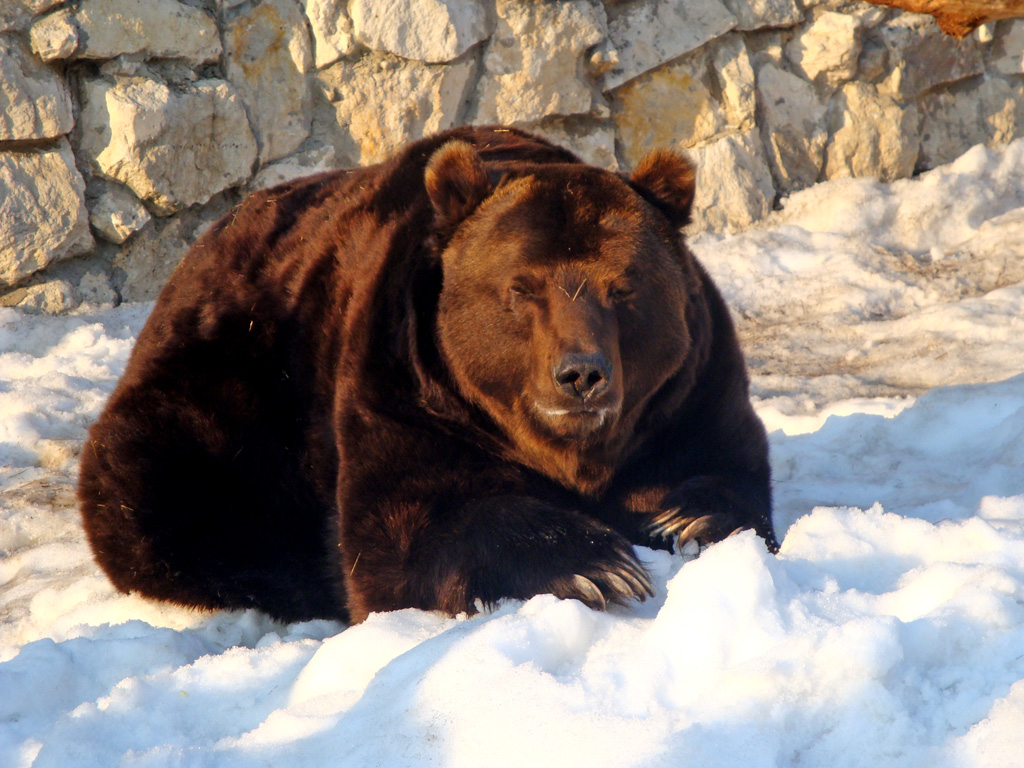 It is been known to every people around the world that the brown bear is the symbol of Russia. In modern Russia, brown bears are used in logos, cartoons, dramatic play characters and so on. In a Russian perspective, bears are cunning, strong, yet caring animals. These traits are commonly shared in the majority of Russian society.

Even though the Eurasian brown bear is the most well-known mascots of Russia, there are two other species of bears that roam the wilderness of Russian Far East and Siberia.

First, is the polar bears. These largest land carnivores live near the coast of the Arctic region. In Russia, there are no exact numbers about how many wild polar bears that live in the region. Only few scientists have conducted researches on Russian polar bears due to its remote and almost inaccessible habitat.

Second, we have the Asiatic black bears. This bear species can be found in the Russian Far Eastern region of Primorsky Krai. Black bears are smaller but more dangerous than their two cousins, so it is best to stay away from them.

2. Bear as a Symbol and a Joke

The Russians didn’t accept the bear as their national symbol up until the 20th century. Western countries like the United States and Britain always depicts USSR as imbecile brutes, like a bear. Some caricatures also made by the British to portray Russia (bear) and Ottoman Empire (turkey) in the least flattering context.

Some jokes also associate Russian with bears, stating that the streets of Russian cities are walked by bears. Moreover, after Dmitry Medvedev (Medvedev literally means”son of a bear”) elected as the third president, these jokes are getting out of hands.

“When a bear chases you, playing dead will save you from the bear”. This myth has been popular in every bear countries. Actually, this myth is half-true, because some bears wouldn’t stop chasing you after you play dead.

This technique mostly effective when you encounter a mother brown bear. Since when you play dead, she will no longer consider you as a threat to their cubs. This technique also can be used against a male brown bear, but it has a fifty percent chance of success. Much like playing a Russian roulette. When you win, you live, but when you lose, you die.

Different things happen when you encounter an Asian black bear. Since black bears put their cubs in a safe place, they rarely chase humans to protect their cubs. But when they do, they want to eat you. Climbing tree and running away is a bad idea, even when you can run faster than Usain Bolt. Playing dead won’t help either. The best way to survive a black bear attack is to fight back using bear pepper spray. Go for the eyes!

Despite their cultural relation with brown bears, the Russian didn’t use bears in their national Coat of Arms. There is actually a moment where the Russian parliament issued the use of brown bear in their coat of arms after the downfall of the USSR. But, the majority of the votes chooses the two-headed eagle of the old Russian Empire symbol.

Every Russian Federal Subjects has their own privileges to have their own coat of arms. Some federal subjects applied brown bears in their coat of arms, such as: the Republic of Karelia, Republic of Mari El, Perm Krai, Novgorod Oblast, Yaroslavl Oblast, and Khabarovsky Krai.

5. A Town Besieged by Polar Bears

Due to melting ice sheets in the Arctic, some groups of polar bears are forced to go inland and roam the streets of a Russian coastal town. 500 of its residents are crippled by their own fears whenever they go out from their houses.

Bears roaming the streets is not unusual phenomena in bear countries. Shrinking habitat has forced them to go to the streets in search of food. Human leftovers in trash bins are the main attraction to the bear. Whenever food is scarce, garbage is hard to resist.

The lineage of Russian people is rooted from the Slavs. In early periods, the Slavs inhabit the area of Eastern Europe, some areas in Central Europe, eastern Baltic, and some pieces of land in Balkan mountains. These forest-dwelling people have their own religion based on the forest deities.

One of the deities in Slavic folklore is the Lashys, or the guardians of the forest. These spirits may manifest in the form of forest animals, such as wolves, deers, hares, and bears to protect the woods. This is the reason why traditional Russian people believe that the bears are their guardian, therefore they are considered as sacred animals.

From the 16th century, the Russian Empire is the top producer of fur. From the vast area of wilderness, hunters gathered furs in large quantities. Most of their preferred furs are deer, fox, wolves, otters, and hares. Very few hunters hunted bears for their pelts, despite their high value in the market.

Russia is also known for its circuses. Circus in Moscow usually features animal acts on its stage. Tamed animals like Siberian tigers, elephants and brown bears are taught by their tamers to do acrobats and many other amazing things.

Aside from circuses, some tamers run their own private service of bear taming. Bear taming in Russia has become popular lately. These tamers usually posted their service on the internet, and their customers usually asked them to hold a bear show during holidays, as well as for photoshoot sessions. Does anyone want to have some selfies with this beautiful animal?

There you go, eight facts about Russian bears that you need to know. When you learning about the history of Russia, it is hard to separate the people from their guardians. From them, Russian have learned many lessons to help them survive and thrive in the unforgiving lands of Rus.