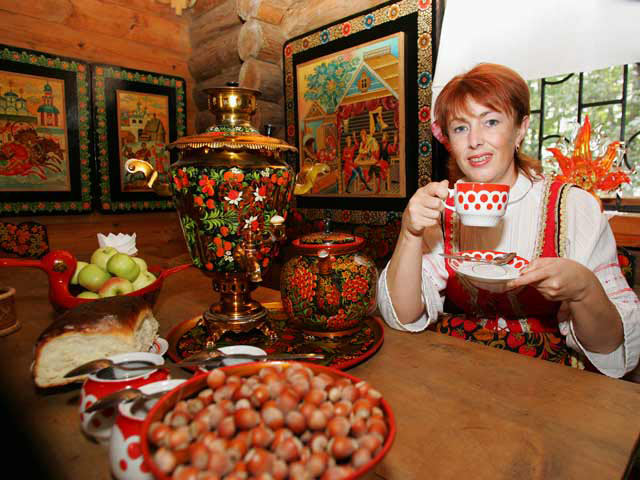 1. The First Time Tea was Introduced in Russia

The beginning of Russian tea culture starts from the time tea was introduced in Russia. It actually goes way back in 1638, where an envoy, sent by Tsar Mikhail Fedorovich, whose reign was from 1613 to 1645, came back with a special gift of teas from the Mongolian ruler at that time, Altyn Khan. It was considered strange at first, since it was seen only as dried leaves. Tea soon nevertheless became popular especially after it became a trade commodity between China and Russia, where they were exchanging teas for furs. However, at the moment, the extremely high cost of doing the trade made tea became expensive and only available to the wealthiest people.

It took quite a long time from the year of 1678 to 1736, until the regular imports of tea were established under the ruling of Catherine the Great, making it possible for Russia to import a great amount of tea, so that the price was becoming a lot cheaper and affordable for the middle- and lower-class Russians, to the point where it became very common to drink tea in any day.

Russia is well-known for its extreme climate, where it is very cold in the winters. The temperature there may fall below -40 degrees Celsius. One of the ways to warm the body in the middle of cold climate is actually drinking hot beverages. A cup of warm tea could be served as one of them. This is apparently what made tea becoming popular easily, and later mentioned as the national drink of Russia.

3. The Invention of Samovar

Samovar, that is literally translated as “self-brewer”, was invented in the beginning of the 18th century. It did what electric kettle does in the present time. Samovar was usually made of nickel, copper, or brass. There were even some that were made of silver or gold. Traditionally, inside the container, there was a pipe placed vertically in the middle, where solid fuel, usually in the form of charcoal or wood chips, would be ignited to heat the surrounding water in the container.

While heating up the water, a teapot filled with concentrated tea was placed on top of the Samovar, so that it would keep the tea hot for several hours. Samovar is still present in modern culture nowadays, although it is all now electric. There are many types of Samovar in the present time, depends on where it will be used and who will be using it. It can be large in size, to be used in cafes or restaurants. And it can also be smaller or compact for personal use.

4. The Trend of Porcelain

Porcelain was first discovered in China over 2,000 years ago. It was used for the making of plates, statues, and teacups. At first, China was very secretive with the formula used in the creation of porcelain. They also controlled the supply of porcelain throughout other regions in Asia, Africa, and also Europe. Then Europeans started to make their own porcelain, which made porcelain became widely available across the continent, including Russia. Nowadays, a family in Russia has several teapots made in porcelain in different sizes and decorations. One may be used for everyday tea-drinking, while the other may be used for a more ceremonial events.

The time when food products, including tea, is hard to get, made it necessary to serve one pot of tea to many people, for economical reason. That was actually what influenced the beginning of Russian tea culture. That history also shaped the culture that exists today, where one pot filled with tea concentrate (zavarka/ заварка) is served to all the people there. To make one pot of zavarka, the most common recipe is 1 teaspoon of tea for each person plus 1 teaspoon for the teapot, put into a teapot filled with hot water. After 3-4 minutes, zavarka is ready to be poured into each person’s cup, then diluted with water. The quantity of zavarka depends on each person’s preference, whether they like their tea to be stronger in taste or not.

6. The Rule of Serving Alongside Snack or Meal

In Russia, serving tea is always accompanied with small side dishes. It is considered rude both for the host and the guest if the host only serves tea without any food alongside it, or if the guest does not eat the snacks that are already served with the tea. The snacks can either be sweet, savory, or both. The savory ones include meat and cheese, while the sweet treats are usually Russian cookies, named Sushkie. Aside from snacks, sweeteners, such as sugar cube, or even jam and marmalade are also available to be added into the tea mix when necessary, based on each person’s preference.

Rather than going out for a meal, Russians tend to invite guests to their home. This culture actually came from the history in Soviet time, where there were only a few restaurants, making it difficult to make a reservation. Going out was too expensive for most people back then. They then prefer to invite their guests for “a cup of tea”, serving their favorite teas in their home instead. Up until today, it is actually common for people in Russia to visit each other at home, relaxing while drinking tea that is served with snacks, of course, as a way to socialise. It already became a habit of Russian’s. Tea is served as a welcome gesture, as a way of getting to know the host and their traditions.

Those are the things that explain the beginning of Russian tea culture and how it became traditions lived up to this day by the people there. It is always interesting to learn new things and get to know how such traditions were made and how history can influence many things that are happening in the present time.