Cheese is a product that uses milk as the base ingredient in the making process. The milk that used the most to make cheese comes from cows, buffalo, goats, or sheep. In the process, the milk is acidified by bacteria and added with Rennet, an enzyme useful for coagulation so the solid curds will be separated from the milk. This solid part will be pressed to shape the final form. Each country has its own type of cheese. The unique style, texture, and flavor of the cheese are depending on what animals the milk comes from, the animal’s diet, the treatment towards the milk, and the flavoring agents used to create a certain taste.

The value of cheese depends on the content of fat, protein, calcium, and phosphorus. The other important things considered in determining the cheese value are its length of life and portability. in term of keeping the cheese in good condition, it is important to make sure that the cheese is wrapped in cheese paper. Some experts claim that this method is the best way to store cheese.

Eating cheese is a part of some countries tradition. The country that popular the most for its cheese eating habit is French. In the most traditional way, French people eat cheese after the main course and before dessert. They usually choose to eat cheese with some bread and a portion of green salad. It is not unusual for French to have this eating habit since French is the home of around 500 kinds of cheese.

Just like any other food, there is always the fake version being sold in the market. That is why we have to be careful when buying things so we will not be misguided and by the unoriginal one. Here are some information of the authentic and the fake cheeses in Russia.

The Authentic and The Fake Cheeses In Russia

To make sure that we only consume the real cheeses, let’s find out about the fake and the authentic cheeses in Russia

In August 2014, there was a significant incident happened in Russia. At that time, the government of Russia decided to ban the import of agricultural products from the United States, the EU, Norway, Canada, and Australia. This embargo continues until the end of 2019. There are some advantages due to this regulation. Farmers do more farming and get more income, many greenhouses have been built, many plants are grown locally. Unfortunately, there is also a downside to this policy. Dairy production is significantly decreasing.

The very low number of production cannot supply the demand hence the increase of the dairy products’ price. The Russians used to depend 25% of their dairy products fulfillment on Belarus, from where it imported the products. Now that they apply the banning policy, Russia is not ready to produce its dairy products independently.  The major reason is the fact that it takes more time for a dairy company to get its return investment than vegetable or fruit production. This also makes it harder to find investors for a dairy company.

The solution to this situation must be found. Some companies do the wrong thing by making dairy products, for example, cheese with fake ingredients. Cheese, whose main ingredient is milk, is not made with milk anymore. The producers change it with palm oil so they can spend less money. These fake cheese have been distributed widely in the market that in 2015, Russia’s National Dairy Producers Union stated that 25% of it is fake cheese. The good news is the Russians responded this news rather positively. Research showed that there was an increase in home-made parmesan instruction on the internet. This shows how much the Russians care for the food they consume.

Now we know that fake cheese is made of “fake milk”.  But since the 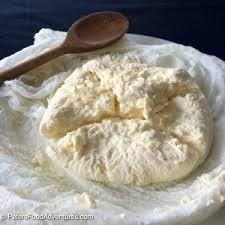 consumption of cheese cannot be stopped, there must be some solutions for it. First, it is still possible to find authentic cheese. Just to be sure that you would not buy the fake one, you can go to the farmer markets in Moscow or other cities. There are some organic farm grocery stores that only offer the best quality of cheese made and other natural foods. While choosing the cheese you want to buy, you must check the price as well. The price of milk in Russia is around 70 rubles and it takes 12-15 liters of milk to make one kilogram of cheese. Based on this it can be concluded that it is impossible for the price of cheese to be less than 1.000 rubles. If you find cheese sold in this price range, it is certainly not an authentic cheese.

Another thing to do to make sure that you only consume the real cheese is by making your own cheese. One of the cheeses you can easily make at home is Tvorog cheese. This Russian cheese is popular because of its similarity with cottage cheese. You can use it as a filling for your Pirog, you can also sprinkle it on your salad. It is also delicious to be eaten with berries.

To make a home-made Tvorog cheese, you only need a half gallon of pasteurized milk and a ¼ gallon of buttermilk (sour milk). Leave both ingredients at room temperature overnight. After that, combine both ingredients and stir it slightly. Check the temperature with your finger, make sure that it only reaches a warm temperature. Then, remove the pot from the heat, put on the lid and leave it for 24 hours. In that 24 hours, put the pot over the stove again, stir and heat it until it is warm. Remove the pot and leave it for another 24 hours. In the second 24 hours, heat the pot for the last time. At this step, the cheese must be separated from the whey. At this final step, you need to separate the whey from the cheese. The best way to do it is by using a strainer. Put the whey on the strainer and leave it overnight to drain it completely.

Now we know how to spot fake cheese and the two options to get authentic cheese. Which one do you choose?