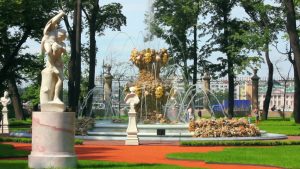 Summer is arguably the most-anticipated season for many Russians. After the long murky winter of Russia, it’s understandable if many long for the sun. Its warmth will melt the coldness away. Goodbye shivering, and here comes sun and fun. Summer is an important season. It’s no wonder that there are many festivals in Russia to embrace summers, such as Ivan Kupala Night and Siberian folk festivals.

The resident of St. Petersburg also among those who can’t wait for summer to come. Especially because the city is in close proximity to the Arctic. It can get colder in St. Petersburg than in the capital Moscow. For some of you who haven’t known much about St.Petersburg, the most visited city in Russia is known for its historical landmarks such as the Winter Palace and Kazan Cathedral.

If you’re visiting Russia during summer, then there’s no better place than St. Petersburg to enjoy the sun in the country. Not only that you can take a great picture of the city’s landmarks under the clear summer sky, but also you can enjoy the city’s public gardens at their fullest. The city is clearly a must visit in Russia during this season. Summer is the greenest Russia can be. Enjoy spending time among nature in this city, because there are 6 St. Petersburg summer garden. They are perfection and a must visit.

Dated back since the day of Peter The Great, People usually refer Summer Garden as “Letniy Sad”, its Russian name. The garden is established in 1704, taking a place at a 12-ha area along the embankment of Neva River. Summer Garden adopted the design of western European designs, such as those from French, Venice, German, and Dutch. Three canals surround this establishment, namely Moika, Fontanka, and Swan. The garden is full of works of art. Monuments, fountain, and marble structures. This place was the Tsar’s favorite.

Summer Garden is not only beautiful but also historical. It’s a good idea to visit it when you go during spring or summer. Spring is the best time since the garden can be too crowded during summer. With sections containing various flowers and trees, it’s easy to lost track of time with nature here. You can stop by an ice cream stand and buy yourself a cone of ice cream. You can also visit an artsy cafe in the east of the garden. Often a free cultural event is held at the park. They make the garden even more festive.

2. The Botanical Garden of Peter the Great

If you want to see varieties of Russian flora in one place, this botanical garden is the one you’re looking for. Not only from Russia, but vegetation also comes from all over the world. You can stroll leisurely on many of its walking tracks. Enjoy exploring the greenhouses and libraries. Botanical Garden of Peter the Great is mainly for research, but its close proximity to St. Petersburg downtown make it a perfect place to unwind after or before exploring the city.

Another “sad” in St. Petersburg, unlike Botanical Garden of Peter the Great, Tauride Gardens is located far from the city center. It’s perfect if you want complete peace from the busy city. Called “Tavrichesky Sad” in Russian, the public park is the favorite of Catherine The Great. You can walk and even jog here, an activity that’s prohibited in a more crowded park. Although the garden is beautiful in summer, you can also visit it during winter. Expect a magical sight of snow garden, complete with a frozen lake.

On winter, there are things you can do in Russia beside skating at a public park.

Or called Mikhailovskiy Sad in its native language, this garden it’s actually still a part of The Summer Garden. What makes it special from the rest of the summer garden area is its landscape architecture, which is a combination of a French garden and an English garden. Interestingly, it is called Swedish garden during the period of Peter the Great. Next to the garden are Mikhailovsky Palace, the Russian Museum, and other landmarks such as the Church of the Savior on Spilled Blood and Field of Mars.

During your trip to Mikhailovskiy Garden, make sure you take a look at the beautiful pond and winding paths surrounded by greens. Coming to the bank of River Moika, you will see a pavilion leading toward the water. It’s a perfect spot to spend the evening when the sun is not so hot during summer. However, the best time to visit is during autumn. The sight of fallen leaves in orange and brown will take your breath away. Read about facts of autumn in Russia here.

Not to be confused with a park with the same name in Moscow, Aleksandrovsky Garden features statues of Russian famous person. A few among many include writer Nikolai Gogol and composer Mikhail Glinka. The garden is in close proximity of St. Petersburg most instagrammable landmarks such as The Hermitage and St Isaac’s Cathedral. It’s also located near Neva River and Admiralty Quay. If you’re strolling around Nevsky Avenue, you can easily access it within a walking distance.

During summer, it’s relaxing to just walk around the small path, just enjoying the sight of trees and a pond with fountain, located in front of the headquarters of the Russian Navy, Admiralteystvo. You can notice this yellow building instantly. By evening, don’t forget to stop by at the Neva riverbank to catch the night view of the quay.

Moskovsky Victory Park is opened in 1946 to commemorate Russia’s victory in World War II. During winter, you can ice skate at rings available in this park. You should not miss this park during summer too when laughter fills the park’s small playgrounds. Meanwhile, adults can play some mini golf here or taking rides on the park’s own amusement park.

Those are 6 St. Petersburg garden you can visit during the summer. Don’t forget to pack the right summer clothes. Enjoy the warm season!