Yuri Gagarin, the first human who went to outer space, is said to have one important task in his trip. That task is: eating. Eating in space is no small matter, because cosmonauts have to eat even though they live “out of this world”, but they cannot eat just any dishes from earth. Space food had to be carefully produced to fulfill cosmonaut’s nutritious diet, as well as specially packaged so they can be eaten without unnecessary mess. Just imagine if cosmonauts have to brew coffee traditionally, how big of an explosion it would trigger then. 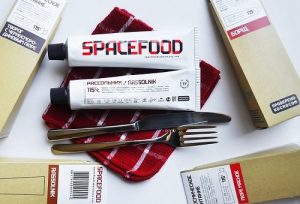 Space foods had to be dehydrated and loaded in weightless packaging. Cosmonauts only had to add hot or cold water into the packaging, shook it well, and then it would be ready to be served. It might sound easy, but the research that went into the development was very tricky. Note that each food had to be sufficiently nutritious and tasty at the same time.

The establishment of the International Space Station (ISS) involving NASA (United States), Roscosmos (Russia), JAXA (Japan), ESA (Europe), and CSA (Canada) as far as twenty years ago marked a new development in space food technologies. Since the task of preparing space foods fell on each astronaut and cosmonaut’s countries of origin, Russia as one of the major contributor developed a menu consisted of hundreds of foods.

These foods are currently also available for civilian purchases through the effort of Russian Laboratory of Space Food. In its website, the laboratory promotes it as healthy food in a convenient package, suitable for busy office workers as well as travelers to maintain balanced diet. They can be bought in specific stores across Rusia, from Moscow to Sochi and Yekaterinburg. What are they? Here is some space food you can eat on Russian part of the earth.

Traditionally, Tvorog is a staple of Russian table. The dairy product made in Russia can be eaten as is, also used as ingredients for pudding, dumpling, and pastries. But for cosmonauts, it becomes an important space food because it is rich in calcium and quite handy to consume. In fact, one of the most in-demand space foods among cosmonauts is cottage cheese with nuts, although Tvorog mixed with fruit purees are also available. Not only Russian loves it, even American and Japanese astronauts seek to exchange their ration with the Russian cottage cheese.

No Russian cuisine menu is complete without Borsch. The same goes for space foods menu. Borsch with meat is also one of the more popular choice, as well as other Russian soups. How to serve soups for consumers in outer space? Of course, they are served as puree in tubes and cans. How about the taste? No worries, somehow the factory can recreate the taste of an authentic Borsch even without the appearance of it.

The unconventional soup from pickled cucumbers, pearl barley, and meats also show up among favorite space food you can eat on Russian part of the earth and ISS. In a report by Rossiyskaya Gazeta that is quoted by Russia Beyond, Director of the Research Institute of the Food Concentrate Industry and Special Food Technology says, “The Americans love our first courses –borsch, rassolnik, kharcho– as well as our cottage cheese, canned food and caviar.”

On earth, Kharcho is rich beef and rice soup in tomato broth with a blend of spices and fresh herbs. Similar to Borsch and Rassolnik, it is also served in dehydrated packages. The space food version may seem more compact, but it maintains the originally rich flavors very well. No wonder that it becomes a favorite.

Jelllied fish, also known as Kholodets or Aspic, is an infamous Russian appetizer in which ingredients are set into a gelatin made from meat stock. At the beginning, the dish was brought by French chefs to Russia in the 18th centuries to showcase the best cut meat and fish flavored with various herbs, spices, and lemons; decorated with veggies and mushrooms in a variety of fancy shapes. Now, it becomes an excellent way to deliver nutritious fish, including pike-perch, to cosmonauts in outer space. However, considering its unique taste, it may be included among Russian food that you probably won’t try.

Goulash is a simple stew of meat, vegetables, and potatoes, seasoned with paprika and other spices. It is the national dish of Hungary, but also well-loved in Russia. Russian version of Goulash with buckwheat is usually served in its dehydrated package for astronaut’s lunch.

The classic Russian vegetable soup shows up among space food as green paste, as opposed to Borscht that looks like an orange paste. If you have no problem with its appearance, then you will find that the taste is quite decent, similar to ordinary Schi. In case you want to enjoy it on earth, you can also add some herbs to give it more taste.

Broccoli and cheese soup is a fairly universal menu, acceptable among diverse tastes and nationalities. It can be paired with bread or savored alone while it is still warm, which makes it quite versatile. Its popularity also extends to the outer space, where it is served among other space foods from Russia, usually for supper.

Mashed Potatoes is the main side dish in Russian student canteens and one of the must-present food during Thanksgiving in Russia. With the addition of nuts and butter or warm milk, it becomes a delicious, fulfilling, and highly nutritious dish. Perfect for a breakfast in both space and earth.

You may have known about the meaning of bread as symbols of every aspect in Russian’s life. Russian love for dark rye bread is also well-documented in history and literature. But do you know that a slice of rye bread is featured in Smithsonian National Air and Space Museum? It is said to be returned from the first Space Shuttle mission, STS-1 (Columbia) in 1981 by NASA. Till now, dark rye bread is still one of the most prominent space food you can eat on Russian part of the earth.

So, which space food tempts your taste bud the most? All of them can be enjoyed in Russia, be it in its original form or in its modified-for-space packages.