Everybody wants to live in a place with a great quality of everything – great education system, great food, easy access to places, safe environment are just a few factors that people consider to choose a place to live at. Even now, we can also put something like country’s level of happiness, a factor that is uncountable but the fact that many people believe that happiness is an important thing to put in that list, there are many kinds of research in this area now.

Looking for a better life could be a reason for someone to move to another place. Many people now resettle in developed countries in order to gain better chances to build their career or to be educated in one of the best schools in the world. Just like any other country, Russia also offers great places to live. These are some of those

If You Can Live In Russia, Which Of These Best Places Will You Choose?

If you ever think to live in Russia, these are some of the best places that must be on your options

Moscow is named as one of the best cities to live in by one of America’s branding advisors. As Russia capital city, it is a good choice for expat, even the young ones, who only knows basic Russian language. You do not need to worry about housing and the environment. Moscow also has some foreigners-friendly neighborhoods. You just need to choose whether you want to live in a house or apartment and how close do you want to be with the city’s major ring roads.

Moscow’s suburbs are divided into four areas. The closest to the city center is Boulevard Ring and the farthest is Moscow Ring Road. Right outside the Boulevard Ring with a large motorway is Garden Ring and a little bit far from there is Third Transport Ring. This area was initially designed to reduce the heavy traffic to and from the city center.

Suburbs in Boulevard Ring area are famous for young expats to live. They provide French International School and rent for boats or ice skates for those living near the lake. This is also the area where you can enjoy nightlife and easy access to many metro stations. If you prefer to live in an area with beautiful architecture, you can go to the Garden Ring. Here you will find various unique boutiques, cafes, and restaurant surrounding with a distinctive atmosphere. A little bit further from the Ring Road, you can find international residential complex where expats who work on the west side of Moscow live. What makes them prefer this area is also the fact that there is a British International School here.  This various facilities provided by each area will help you to choose the most suitable for your needs.

This city is famous for its historical and cultural building. You can just walk around the city and enjoy numerous buildings built with neoclassical style. If you enjoy watching the art performance of art display, there are plenty of museums and theatres to visit here. 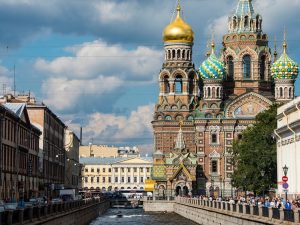 need to spare much money. You can pamper yourself in a beauty salon starting at $10. What makes it easier for expats to live here is that there are more people in St. Petersburg that speaks a foreign language (mostly Germany) than in other cities in Russia. This is also the reason that many street signs and name of stations are written both in Russian and English. There is also nothing to worry about when you want to eat in a restaurant or café. All the employees have good spoken English skill and they are always happy to help non-Russian speakers. St. Petersburg is not only famous for its beautiful and artsy buildings all over the city, but also for its nickname “The Venice of The North”. The reason for this nickname is because the founder of this city, Peter The Great, wanted to take advantage of the fact that St. Petersburg was located on around 40 islands. He did not allow the building of bridges so then the citizens would transport by boats. This is definitely one of the perks of living in St. Petersburg and absolutely a good attraction for tourists who want to wander around by riding boats.

Tyumen is a city located in Tyumen Region, thousands of kilometers away from Moscow. This particular city has been awarded as the most comfortable city in Russia to live in for three consecutive years. This city which population is below a million people, less crowded in comparison with both Moscow and St. Petersburg, has placed top 20 rankings in regards to its living environment. This pretty high quality is proven by the continues building around the city. The government allocated a big budget to construct and repair roads. Although the population of Tyumen is relatively small, the number of cars in this city is pretty high. Knowing that this can cause a heavy traffic jam, the government built some new overpasses located on the outskirts, as well as traffic lanes for public transports. This is a way to attract more of Tyumen citizens to ride on public transports. This reason only, that the citizens are provided with great quality of public facilities that more or less affected them to be less stress on their daily life, is a good point to choose this city as the best place to live.

If you want to spend some leisure times sitting around and sightseeing, you can find many gardens and squares in this city. Each of them has already been complemented with benches and playground which makes this place also a good destination for kids to play. You can also walk around on the sidewalks and for bikers, you can soon enjoy the bike path that will connect public places. With a lot of green zones in this city, surely it is very enjoyable to take a walk or bike around. If you live in this city, you can also spare your time at the famous Tura Embankment. Located on the bank of Tura River, this four-level area is also tourists’ favorite destination. You can find many art decorations, such as sculptures, monuments, and lanterns here, or just sitting on the benches and enjoying the beautiful view of Tura River. With all of these great public facilities and environment, would not it be great to live in Tyumen? 🙂

Those are three of the best cities to live in Russia. Which one do you choose?