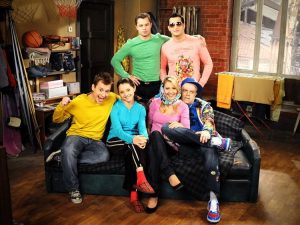 If you like light, humorous TV series that can lift your mood and help you have a good laugh, you’ll enjoy this series from year 2012. With a total of 6 seasons and 120 episodes, this sitcom is set in a restaurant kitchen, and the main character is Max, an aspiring chef who has to face different struggles as he tries to pursue his dream. Why do we recommend this series? The vocabulary used here is simple so beginners will not have a hard time to pick up on the conversations. Since this is a cooking-related series, you’ll learn many new vocabulary about food. The actors speak clearly, not too fast, so it’s another good news for learners. Don’t forget to turn on the subtitles while watching, and try to remember the new words you learn.

Sitcoms are always recommended to watch as they generally have a simple, light story that can be easily understood by learners at any level of mastery of the Russian language. This sitcom is about Sasha, a rich boy, who arrives in Moscow and tries to live an independent life as an astronomy student, away from his rich family. Sasha soon makes friends with the other characters who live together in his university dorm. Together, many funny stories unfold from their daily lives. Beginners will enjoy this series because the conversations are simple and not too fast, the vocabulary is also nothing complicated or too advanced. The humor will make you laugh along the way too! This show has aired from 2008-2011 on Russian TV, and spin-offs have already been made as well.

If you have a different preference aside from sitcoms, perhaps you can try watching this reality TV series. It has been famous among Russians since 2008 and has a total of 9 seasons up until now. It’s a dating reality show where each candidate is given the chance to get to know three potential suitors for marriage. It even has professional matchmakers and astrologers! Even if you don’t like cheesy romance, you can still get a good laugh from this hilarious TV show, especially how each candidate try extreme ways to win the heart of the woman, by showing off their skills and talents. Since this is a reality TV series, you can get used to how Russian people talk in real life, and understand Russian modern culture and lifestyle better.

Sherlock Holmes, the famous fictional British detective, has been remade into movies and series countless times, don’t you think? The Russian version is no exception, although it only aired shortly in 2013 with a total of 8 episodes. Still, you can learn some Russian language from this crime drama thriller! The story itself was set in 1800s London and involves how Sherlock Holmes, the famous detective, and his partner Dr. Watson tackles mysterious and unusual cases of all kinds. Since this is a crime series, learners can get quite a lot of new vocabulary and it’s advised to use subtitles for beginners, just so you have a guide in trying to pick up on their conversations.

If you are fond of series with powerful girls as the central characters, you might want to check this one! It’s about a group of female pilots or the Night Swallows, as the name of the series suggests. It’s a military drama made in 2013 and set in World War II. Since Russia held a huge role in World War II, it’s no surprise that they put this theme in many of their popular TV series and even movies. Diving deeper into the story, it’s about two women, Galya and Zhenya, and off-book missions with reasons that interfere with the military mission. This series is recommended if you love history movies, and the slow-paced conversations make it easier for beginners to understand even though the plot is pretty heavy. Learners will also get new vocabularies related to military and war in their word bank after watching this female-centric series!

Let’s go back to something a little lighter than crime thrillers or military warfare, shall we? This time it’s another popular Russian sitcom from year 2010. This series suits learners who love anything related to the medical world, as the plot revolves around some medical interns and the struggles they face daily. Learners will be laughing when watching how four clueless interns must survive in the hospital under the leadership of a stern professional doctor. Although the theme of medicine and health might be intimidating to learners when looking for a TV series, this series has a light comedic tone, and the conversations are also slow, with clear visuals to help learners understand the meaning of the words that might be new to them.

Do you like music and singing? Then you might want to check out this Russian talent series! It’s a 2013 reality series where celebrities impersonate famous singers, and are rated by judges. You can learn Russian language from both the conversations with general vocabulary, and the songs being sung. If you are looking for something pretty light yet still entertaining to watch, try this series!

So, those are 6 Russian TV series that are easy for Russian learners. Why don’t you pick one that suits your preference and enjoy learning Russian in an entertaining way? Don’t forget to apply these principles to manage your attention when learning, so your TV-time is not thrown to waste!