When we want to learn about the history of a country, we can learn from its culture. One part of the culture is religion. Religions, more or less, have the roll to shape the habit and the characteristics of its believer. It can even affect the running of the whole country’s government. 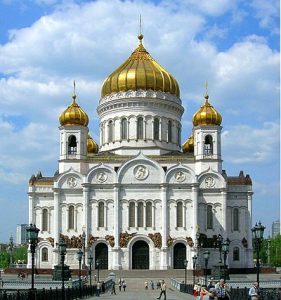 Russia is a country that has diverse religions. The majority of Russians are Christians, specifically Eastern Orthodox Christianity. Almost as many as the number of the Christians, there are many Russians that proclaim themselves as either the believer of spiritualism (but not religious) or as atheists.

As stated, Russian Orthodox is the biggest religion in the country. Based on data in 2012, 41% of Russians professed faith in Russian orthodox, while the other religions such as Muslims were only 6.5% and Buddhist was 0,5%. Even though Christianity, in general, is the biggest religion in Russia, diversity of faith has been very common there. This condition helps to form an ethnocultural society which is a good thing for people to learn about keeping harmony and peace with each other.

Orthodox Christianity was not the first religion of the Russians. Way back before the 10th century, Slavic Religion was widely practiced all over Russia. Russian Orthodox Church and the historical journey of Russia started in 987 when Kievan Rus’, the loose federation of the Slavic and Finnic people, made Orthodox Christianity as their state’s religion. Vladimir The Great, the leader of Kievan Rus’, was the one responsible for it. This also marked as the beginning of the image of Russia as the country whose identity is shaped by religion, mysticism, and statehood.

Russian Orthodox Church had an undeniably major role in Russia. It was even considered as the glue that kept the nation stronger and solid. This is not an exaggeration since the church took part in the Russian Empire expanded in the 18th century. The expansion happened during the reign of Nicholas I. He gained popularity for creating the best extension for the empire. He was also popular for its ideology as an Emperor of Russia, which was “Orthodoxy, autocracy, and nation”.

The government saw the dominance of the Russian Orthodox Church as an important thing. It was so important that they sealed it by law. The empire did not only incorporate Christians but also the believers of alternative creeds. They believed that was an important thing to do to avoid any issues of integration.

The dominance of the Russian Orthodox Church which sealed by law caused a bad effect. This was what happened in Russia until 1905. As the superior, Russian Orthodox Church was the only religious group allowed to do missionary activity. Other religions were banned to do this. The law also ruled that apostasy was an offense that deserved punishment. You could imagine that until 1905, religions such as Catholicism and Islam were forbidden to grow among Russians.

The interesting part is the fact that the Russian Orthodox Church never prohibited both personal experience of belief or religiosity and speculative mysticism. Orthodox Christianity itself had some roots of Gnostic since the sixth century. This showed that this major religion had some views of an ancient religion that was even got stronger because of theosophy, a philosophy characterized as mystical and occultist, which was popularized by Jakob Bohme, a German philosopher.

The condition of the Russian Orthodox Church and the historical journey of Russia kept on getting more interesting. At the end of the 18th century, the religion of “double faith”, a mixed religion of Slavic pantheism and Christianity gained popularity among intellectuals. At the beginning of the 20th century, the philosophy of esoterism and occult spread widely. During the same period, the Russian empire began to acknowledge the fact there were various kinds of religions.

After the Russian Revolution, Russian Orthodox Church had no privileges anymore. The same condition happened as well to all the minor religions. The new state took a different approach which was a non-theism ideology. In spite of this new approach, the Russians still showed a high level of religiosity. In 1929, 80% of Russians stated themselves as believers. In 1937, 75% of the whole population was believers with Orthodox Christians as the major religion.

There were no religious barriers during the reign of Soviet. There was even a huge displacement of people which was the opposite of what happened at the dawn of the 1900s when Russian Orthodox Church was very dominant in the Russian Empire. This has helped to create the blending of various religious cultures.