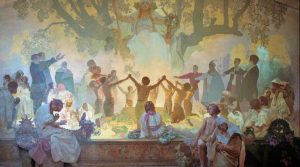 What are the Slavic religions? Before moving further let’s talk about Slavic first. Slavic is an adjective to describe anything related to the Slavs. Whether it is Slavic countries, Slavic people, and Slavic language. Slavs itself is a group of people residing in the middle to the east European. They have distinct language, culture, and traditions.

Slavic regions and countries include Belarus, Russia, and Bulgaria, among many others. Even between these countries, there differences in culture although they can be said they’re within the same ethnical group. Talking specifically about Slavic Religion in Russia, we will learn about faiths and beliefs of people in this particular area.

Let’s learn all about Slavic Religion. Do religion is taboo thing in Russia? Find out here.

Let’s start from the beginning. Slavic Religion exists since ancient time. There’s no clear evidence when exactly this paganism started, but it believed it existed since 3000 years ago. One of the earliest historical records of Slavic paganism was written in 1111 titled Primary Chronicle. Another record is Novgorod First Chronicle, dated from the 8th century.

Slavic paganism is the original religion of the Russian people. That’s why, when Christianity first introduced, it receives a lot of resistance from locals. The Primary Chronicle and Novgorod First Chronicle contain information about their resistance.

According to historians, Slavic Religion has Indo-European origins. Historians found uniformity in linguistic, dialectal differentiation, and religious lexicon between Slavic beliefs and other proto-indo-European religion. Those religions include Balts, Phrygians, and Indo-Iranians. All are ancient religions pre-Christianity.

These are some lexicon and religious vocabulary of Slavic paganism that are similar to other religion:

Slavs believe in one entity (God) that’s raise above all other lesser spirits. God in Slavic religion govern these spirits and deities, and each spirit has a certain task laid upon them. Their task is to obey the duty assigned to them.

The one supreme god is symbolized with a six-petaled rose inside a circle. People carve these symbol on their roof, edges, and peaks of their house.

In Slavic belief, lesser gods, spirits, and deities run and enliven the life on earth. Some of those deities are:

Like many other religions, Slavic people have their own rites and festivals.

The Winter Solstice starts from December 21st to January 6th. It’s the celebration of victory for light to have defeated the darkness. It’s similar to present day’s Christmas (well, Christmas is based on pagan holiday anyway).

It’s a happy celebration for all. People sing koledy, an equivalent of Christmas’ carol. People visit friends and relatives to wish them good luck for the upcoming year. People also burn fires at cemeteries in order to warm up the soul of the dead. A tree is put inside the house. Christmas tree is a tradition that goes all the way back before Christianity.

Kupala is the celebrations at the end of spring and the beginning of summer. People sing, dance, and tell stories during Kupala night. Kupala is the celebration of fire and water. A large bonfire is built near a lake or a river. Apart from dancing and singing, people also attempt to leap the bonfire. Those who succeed will be granted good luck all year round.

Celebrated on the first day of autumn. It’s to thank the god for the bountiful harvest, and also the strength for the upcoming winter.

It seems like every culture has its own superstitions. When it comes to Slavic religion what are this edition here we will explain several examples.

Kupala is also known as valentines day of people. why? In Kupala day, couples have their own ritual, especially young couples. One of the rituals is leaping The bonfire hand-in-hand. The couple that successfully leaping fire will be considered long-lasting in their relationship. Otherwise, they will break up if they fail. Young girls will also release wrath to the river in the hope a guy will catch it and become her potential husband.

It is believed that fern will flower during Kupala Night. The one who finds it will be gifted with great luck on the following year. Fern flower symbolizes treasure and wealth.

Perhaps the most popular Slavic myth is vampires. They are evil creatures who suck human blood. Vampires is hundreds years old myth, and continue to make regular appearance today as characters in movies, or Halloween costumes. Also read more myths and russian folkore to find out more.

Today, only a remnant of Slavic Religion persist. Many of them are assimilated into Christian celebrations, such as winter solstice which becomes Christmas/new year, and Kupala night become the celebration of John the baptist. Learn more about Ivan Kupala celebration here. If you want, you can also read today’s religion in Russia.