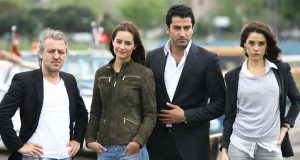 There’s an interesting fact. After the USA, Turkey is next in the line as one of the world’s TV series exporters. The show producers in Turkey continuously producing series that the country is the world’s fastest exporter too. Many of those TV series made their way to Russia and they are well-received among Russian audiences. Even though there are so many Russian TV series already. Many people like to watch Turkish TV series and here’s why.

1. It’s a window to a different culture

We are always attracted to something unique and different. This also applies for Turkish TV series in Russia. Russia as a country that is culturally very separate from Turkey. Although being a neighbor, Turkey is different from Russia in many aspects. The climate is one thing, the culture, society, and religion are another. It attracts curiosity among Russian audience. Many people find the Turkish culture fascinating.

Most Turkish TV series revolves the theme of love. It’s an easy topic to digest and everybody would easily empathize and understand. Love is the universal language. No matter what culture it is, people pretty much have the same interpretation of love. After love, family and friendship are also themes people can comfortably absorb. Turkish TV series is also packed with the family and friendship values. It makes them relatable.

Turkish TV series, their storylines are packed with so many twists and turns. The ups and downs of the drama keep the audience on the edge of their seat. They will come back again when the next episode comes out to see what happens. Turkish TV series’ writes know how to write a captivating story that entices the audience in the long term.

Beautiful actress and actors star Turkish TV show. Many people fall in love with them and become a fan. Some audience got attached to certain characters they play. They want to know their fate and follow their journey throughout the episodes. Attachment to the characters is also one of the reasons why Russian loves Turkish TV series.

5. A fun activity to pass an hour or two.

An episode of Turkish TV series could run from one two hours. A full couple hours of entertainment is especially attractive for Russians who want to spend an evening peacefully after a hard day at work. Especially when the plot is interesting and the story is captivating. It’s also a good watch while the whole family enjoys dinner and family time.

If you want to watch something easy and funny from Russian TV shows, you can also consider Russian cartoons, especially the one that has taken the world by storms, such as Masha and The Bear.

Shot in the beautiful Turkish city like Istanbul, Turkish TV series features landmarks and interesting street as their backdrop. Two people having a romantic date on a restaurant overlooking Hagia Sophia is nothing but incredible. Turkey is a melting pot of cultures and tradition. As a country standing both on the edge of Europe and Asia, Turkey offers remarkable diversity that’s influenced from both sides of the continent.

On the indoor scenes, the audience will notice that the characters live in a beautiful house or a mansion. It seems like everybody in Turkey is rich, although it’s not. TV series sometimes is not the most accurate depiction of a country’s social and economic situation. But if you love beautiful architecture and interior, the set could be a feast to the eyes. Besides, Turkish series do not hesitate to throw a big budget on each episode. They will make sure the audience will get the best visuals possible.

Some people watch Turkish TV series because they fell in love with the music and the acting. If you’re already an avid viewer of telenovelas, then the acting on Turkish TV series will seem familiar. Call it dramatic and opera soap-ish, but many people love it. Turkish series is also a starting point to get introduced into Turkish music and song, which serves as the soundtrack of the show.

8. An easy watch and pure entertainment

Sometimes when people watch a TV series, they want a story that’s easy for their brain. A thought-provoking political drama or science fiction series could be an interesting option. But sometimes people just want a good laugh, a lighthearted comedy, or a beautiful love story that does not really make your brain works too hard. This is where Turkish TV series come in. You’ll just need to sit back and enjoy the entertainment.

Some people watch Turkish TV series in order to improve their language skill. Russia and Turkey are neighbors. A relation is inevitable especially for political or economic reasons. That’s why some Russian people find learning the Turkish language can be useful in the future. And nothing more fun than learning while watching TV series.

If you want to find a Russian TV series that’s easy for Russian learner, read here.

10. In some part of Russia, it’s because of the similarity in culture

Russia itself is a diverse country. For example, the Eurasian part of Russia such as Kazan is where Tartar population concentrate. Tartar people and some Eurasian ethnicities share more similarities to Turkish culture than Russian people do. Hence why in a certain region, Turkish TV culture is gaining popularity. Turkish TV series is also especially loved in post-soviet countries such as Kazakhstan and Uzbekistan.