Russia is one of the coldest inhabited place on earth. Understandably, soup as the world’s ultimate comfort food is a staple in every Russian household. There are various kinds of soups ready to be served in any seasons, usually for lunch. Here is seven of the most famous soups in Russia that you might want to try to recreate in your own kitchen. 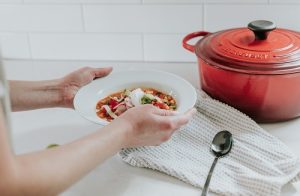 No one can talk about popular cuisine in Russia without mentioning Borscht, the cabbage soup with distinctive bright red color. It is not only the most well-known soup from Russia, but also from all of Eastern Europe.

To make a pot of Borscht, start by making beef stock. Cook beef meat and bones in a pot of water on low heat for 2-4 hours. While cooking, add some coriander, bay leaves, and whole peppercorns. In the last hour, put in whole beets in the stock until they are cooked through. Afterward, strain the stock. Separate the beets, throw away the spices, then leave only beef and stock.

Next, saute your chosen vegetables on medium heat. Cabbage is a must; but you can also add mushrooms, potatoes, or carrots. Add beef and stocks over sauteed veggies, then continue cooking. At the very end, add the separated beets again. Serve it along with a generous amount of sour cream over it.

Within Russia, Shchi is not less popular than Borscht. It is one of the 15 things you need to taste in Russia. There are hundreds, if not thousands, Shchi recipes featuring various combination of spices and veggies. That just goes to show you how important its role among other famous soups in Russia.

To make a pot of Shchi, start by making pork broth. Cook pork, whole onion, and whole carrot in a pot of water. Bring it to a boil, but don’t let it cooked through. Remove any foams on the surface so the broth remains clear.

Meanwhile, stew the cabbages and fry other vegetables. Once the broth is ready, throw in the fried vegetables, and lastly, stewed cabbage and millet. Boil for a few more minutes. Serve it cold after letting it stand for an hour or so.

Similar to Borscht, it is also served with a dollop of sour cream. However, note that its broth tend to be richer and thicker than Borscht.

Milk Soup might be less popular compared to Borscht and Shschi, but it is comparatively more prestigious. After all, Milk Soup with dumplings is known as Vladimir Lenin’s favorite comfort food! The controversial figure is one of the most famous people of all time from Russia, and he has one of the best taste as well.

To make a pot of Milk Soup, cook 1.5 cups of water to a boil. Then pour in 10 cups of milk and cook it over medium heat. Stir it occasionally until boiling or around 10-12 minutes. Keep stirring until milk bubbles appear. At this point, you can add dumplings or pasta, then keep cooking on lower heat for 7-8 minutes. Lastly, add salt and sugar to taste. Serve it hot.

If you are a fan of Russian fish dishes, then you would love Ukha. It is one of the oldest comfort food in Russia, and usually served during summer. Its main ingredient is fish; but you can make it with almost any kind of fish. Salmon, trout, cod, whichever fish you can find in your kitchen.

To make a pot of Ukha, first you need to clean the fish and cut it into big chunks. Put it into a pot, add in some whole onions and chopped carrots. Add a bit of water into the pot. Sprinkle some spices, such as bay leaves, cloves, salt, saffron, and pepper. Let it simmer on medium heat for several hours.

While cooking, remove foams so the broth remains clear. Around a half hour before it is finished, toss in chopped potatoes and barley. Lastly, mix some starch or flour to make it thicker. Serve it warm with a sprinkle of dill and a bit of lemon juice to reduce its fishy smell.

Okroshka is one of the most favorite foods in Russia during summer. Not only refreshing, it is also extremely easy to make if you have prepared all of its ingredients.

First, chop boiled potatoes and hard-boiled eggs, then dice some cucumbers. Place them all in a big bowl. Add sliced scallions, also some dill, coriander, or parsley. Pour in yogurt or kefir, and stir with some sparkling water. And, that’s it. You can serve it directly on the table.

The most traditional style of Okroshka uses Kvass, a type of Russian fermented soft drink, instead of liquefied yogurt or kefir. However, it might be difficult to find Kvass outside of Russia.

Need some vegetarian recipe? Grybnoy soup is one of the best option. It is full of veggie goodness, accompanied with unique Russian taste that will comfort you through any season.

To make a pot of Grybnoy, prepare a bowl of thinly-sliced mushrooms. You can use both dried mushroom or fresh ones. Then chop some onion, garlic, carrot, and celery. Afterward, whip up several cups of vegetable stock.

Sautee onion, garlic, carrot, and celery for around 5 minutes. Add mushrooms into the pan, and stir over medium heat until they begin to soften. Pour a generous amount of vegetable stock and bring it to a boil. Add barley, salt, and pepper to taste. Simmer it for around 20 minutes on lower heat. Serve it hot with a handful of sour cream.

Considering many people’s love-hate relationship with pickles, Rassolnik might be seen as a strange kind of soup. Nevertheless, its salty and sour flavor has charmed pregnant ladies in the country.

To make a pot of Rassolnik, you can use chicken, beef, or pork broth. Cook the broth to a boil, then toss in diced potatoes and pearled barley. Simmer it on lower heat.

Meanwhile, saute onion and carrot with a half tablespoon of butter in a pan. Season with salt and pepper. Pour it into the soup mixture along with shredded cucumber pickles. Cook for 30-40 minutes until the potatoes and barley are cooked through. Add salt, pepper, and fresh herbs to taste. Serve it warm with a spoonful of sour cream.

So, among the seven soups, which one do you like the most? Try to make them and serve in pretty bowls for your loved ones.