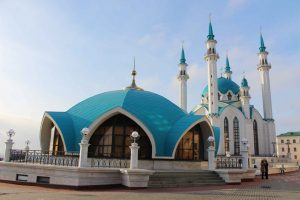 Russia is known as a powerful country, with its powerful military and completed with an outstanding wealth. In th country, you can find some unique and interesting buildings like Saint Basil’s Cathedral, Kizhi Island, Lenin’s Mausoleum, and also Grand Kremlin Palace. Most of you have known about one of the famous city in Russia, called Moscow. In the city, you can find some things worth to visit, like Moscow Kremlin for example. That uniquely-shaped building is always eye catching.

But now, we’re not talking about that particular city, but we want to tell you about a city in Russia called Kazan. Hav you heard about that name? Mostly, people still not very familiar with this part of the country, but after some big events happened in it, the popularity of Kazan city keeps increasing until now. That’s why, many people would love to spend their time to visit the city of Kazan. But before that, we’re gonna explain some beautiful facts you should know about Kazan that should be included as popular city that you must visit in Russia.

So, the first one that should be included inside the facts about Kazan city is of course its location. Without this info, you can get lost pretty easily in such a big country. Kazan city, is actually the capital city of Tatarstan, with Ilsur Meyshin as a mayor. This city is also one of the biggest cities in Russia, that becoming a center of trading, industry, and also culture. It’s the best place to learn about the Tatar culture.

This Kazan city has some popular nicknames such as The Third Capital City or Russia, and also the Millennial City. Now, it has about more than a thousand year olds. It’s also included in the list of cultural cities or World Heritage Cities by UNESCO. In the city, you can find many buildings that used Kremlin style on them. Even though the modernization already reached them, but they still love and respect their own unique culture. The city has about 1,1 millions of population, with an wide of the area that reaches 4 thousand kilometers.

So, after talking about the brief information that you can see on above paragraph, we want to tell you a little history of Kazan city. The name Kazan came from Qatan (Tatar Language) which means a kettle. Yes, a kettle, you know a container for store water. Beside that word, the other possibility is the word Qazgan, a Tatar word for ditch. Why though, the city was named after a kitchen utensil?

It’s believed because of the shape of Kazan that looks like a kettle if seen from above. But, there’s also some interesting folk tale about the originality of that Kazan name. Once upon a day, there was a Tatar Queen called Soyembika. She accidentally drops a small part of gold (Golden Qazan) into the river in the city. That gold then grows into a great city known as Kazan today. But of course, it’s only a fiction for kids, but it’s very interesting.

Moving from there we’re going to the other aspect of life, religion. In the city of Kazan, there’s a lot of muslims. In fact, the majority of 6,6% muslim population who live in Russia is from this very city. Islam religion grows very well in this part of the country. And that number is surprisingly still increasing, even today.

In Kazan city, you can see so many things that related to Islam religion, like the mosques for example. So it’s not a strange thing to hear the sounds of adzan during day or dusk, a call for all muslims in Kazan city to do some praying. Some say that the situation around Kazan city is very similar to a country that has muslim majority, like Indonesia for example. Adzan, and the girls wearing hijab is common things to find in this city.

One thing that should be included in best things you must do in Kazan is visiting the Universal Temple. It’s a very unique building to see, not only in Russia, but also all over the world. It has a very deep meaning of toleration. All religions are hugging each other in one formation. It’s very calming and peaceful, the atmosphere around it. The maker of this building, Ildar Khanov, only have one purpose on making this wonderful building. He wants to show the world the temple of culture and truth. A truth, about how the world should be.

Even though it’s not an active temple, it’s still popular for being a landmark of the city of Kazan. People are still visiting this place, even though they already saw it like thousand times. In this building, you can find some architectures like church of Orthodox, synagogue, and also a mosque for muslims.

Like mentioned above, islam is growing so well, thanks to the people who spread this religion to some community of the city. With a growing muslim population, someone should built a place for praying. That’s why in the city, you can see some Islamic buildings like The White Mosque (Ak Mechet) and also Bolgar Mosque.

You can visit them sometimes to see the directly the heritage of Islam history in the city of Kazan, Russia. Take your time to pray for a sec after exploring some areas of Kazan.

One thing that also should be known is a great stadium located in the city called Kazan Arena. It’s an arena for basically most famous football club in Russia, who have their matches in there. The stadium can hold about more than 40 thousand people. The Kazan Arena was used by so many famous football clubs like national team of France, Germany, and also Australia. Back in 2018, there was a world cup that held in this city, and the stadium was being a prima donna of the event.

That’s why, many people, men especially, have a dream to visit this stadium one day after seeing the world cup. Seeing the place that used for the battles of Korea Republic and Germany, Iran and Spain, Poland and Colombia, and also the battle of France and Australia, is may be the greatest thing in life.

Aside for having some wonderful places that included inside the most attractive venues during World Cup 2018 in Russia, Kazan city is gonna hold another interesting event, the 2019 Wordskills Championship. On the official site, you can see the statement that shows Kazan city is very ready to welcome ten thousands footballs fans. Of course they should be ready to give some support to their favorite team. The event will be in Kazan Expo International Exhibition Centre, located right in the city of Kazan, Russia. So, don’t forget to mark your calendar for August 29th. Hope you can get there safely and excited.

So that’s all, the unique facts you should know about Kazan. With all its uniqueness and benefits of having some popular attractions, visiting this city on your next journey wouldn’t be so bad idea. You can going to the city to explore some more about it, even new things that maybe you can find so unusual on your trip. Just remember to always be careful, and also stay sober.