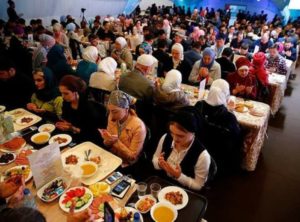 The above sentence means : Welcome the Holy Month in Islamic Calendar–Ramadan.

Yes, for the muslim in all over the world are counting days to begin fasting in Ramadan. The fasting in this Holy month is an obligation to do. Because it is related to Ramadan that is coming up soon, let’s talk about how Ramadan culture is in Russia :

1. Break The Fast Together

Muslim population in all over the world commonly break their fast together. It is included the Muslim Russians especially who live in Moscow. They often ask any relation or even acquaintance and neighbor to share “iftaar” (meal eaten by muslim to break fasting).

In another case , the banquet with full of foods and drinks are served near the mosques. All of stuffs are attractive cuisine, either the traditional Russia cullinary or the other else. Of course, the halal thayyiban cuisine according to Syariat Islam in Al-Qur’an and Hadist. You should also know what the popular food during Ramadan in St. Petersburg.

Besides the food in Chechnya, you might want to know about what the famous cuisine in Siberia.

Muslims’ banquet of culinary exist anywhere. It is kind of identical Ramadan culture in Russia. The culinary banquet is developed mostly in Masjid a.k.a Mosque. By the way, as talking related to Mosque, you should know about the most famous Mosque in Moscow.

On the banquet, many foods and drinks are provided to every visitor, especially for Iftaar. There is a kind of food that have to be served. It seems the most important cuisine, either for Suhoor or Iftaar. Can you guess what the meal is ?

Yes, it is soup that cooked with the other stuffs  including :

Russian Muslims hardly want to have simple meal, such as milk and jam like the most Europeans used to. So, this habit makes the non-muslim Russians wonder why.

Actually, its reason is so simple. The Russian Muslims are similar to others who leave for their home to work at 6.30 AM, and then coming back after working at 4.00 PM. But, during fasting, they do not have any lunch time at 12.00 PM like they used to. So that, milk and jam will not give them adequate energy for work.

Besides, the temperature in Russia often are too low. Somehow it can be under 0°C. Because of that, having milk and jam as their meal in Suhoor or also Iftaar can’t supply the enough calories to keep the body heat normally in order to be able to survive through a though day.

Of course the Russian Muslims need strong meal during Ramadan to go through the cold temperature and hard work conditions. So that, the high nutritious and adequate calories is a must part of Ramadan Culture in Russia.

Don’t forget to know what the best and the most popular culinary in Moscow as the capital city of Russia.

What makes Ramadan culture in Russia is a bit different from other countries that fasting hours here is too long. It has been occurs since several years ago.

The Muslims in Russia often fast more than 18 hours ago. Their fasting begins from the Fajr time fell before 3.15 AM and then ends by Iftaar at 9.10 PM. Even, the fasting in northern region somehow is harder as the hours is longer than 18 hours.

Because of the long fasting hours, it is kinda another challenge for Muslims in Russia to fast. Especially those people who work in labor. Despite of this hardship, the long hours would never be the obstacle for them to fast in Ramadan.

So that, it challenges the Muslims in Russia to fast in Ramadan. However, once again, no matter what challenge they have to face, they keep do fasting in Ramadan as it is a must according to the determination of Allah.

During Ramadan, the alcoholic drinks that used to be a part of daily life for many non-muslim Russians are forbidden. It is a Ramadan Culture in Russia in order to appreciate the Muslims who are fasting in full of month.

Alcoholic drink is modern tradition for many people, including non-muslim Russians. Meanwhile, any alcohol is Haraam that is forbidden by Allah SWT. But, in this holy month, the whole civilizations appreciate those Russian Muslims who fasting in Ramadan in order not to be tempted to try to drink the alcoholic beverage.

Many Muslims have more spare time during the holy month. So that, they used to spend their spare time by reciting Al Qur’an. They do it anywhere and anytime in order to be blessed more by Allah SWT. They do it in work place, home, college, school, and Mosque. Related to the Mosque, there is an article in this website about the most unique Mosque in Russia for your additional info.

Okay, that is all informations that we can share to you about Ramadan Culture in Russia. Hopefully for those Muslims who are fasting in this month, you can enjoy your day while you are fasting during Ramadan.