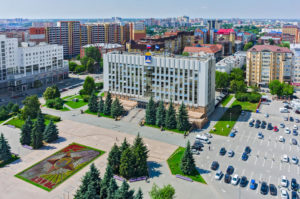 Yes, you read it right. You can live in Russia according to the popularity of the place. You can live among foreigners just like you. It is good for you who have not been to Russia before. Besides, you need some time to mingle with Russian culture until you can meet and understand the people. Although, basically, all of Russian people are good. However, learning about their culture can make you as if you have been in Russia for a long time. In addition, you can decide whether your place of living close to your office or not.

Here are the most popular places for foreigners to live in Russia that you can choose based on your preferences.

Also read: coolest places for hang out in Russia.

Among other cities in Russia, you might have not heard about this city just yet. Tyumen in a city in Siberia. The city grab the first rank according to Russian Reporter magazine in May 2017. The assessment is according to quality of life in the city and others. So, you can live happily in the city.

Although Tyumen is not one of capitals or Russia, you can still enjoy many canals and bridges. There are so many beautiful gardens and architectures as well.

Apart from the expensive housings in Russia, residents in Krasnodar gush about the high construction sites of housing in the city. The city is about 1,300 km from Moscow. The residents also say that the service and commodities are just the same. These two information is great  for you if you want to find a city that offers affordable living styles. Moreover, there will be a lot of options for you to live in.

Natural entertainment in the city is Lake Staraya and Lake Karasun. If you wish to live by the lakes you can choose either Solnechny Ostrov (Sunny Island) or Cheryomushki Residential Complexes. Other entertainments include Krasnodar stadium and fountain on Teatralnaya Square.

If you want to live in a city where you can see much water, Rostov-on-Don is a choice for you. It is 760 km to the south of Moscow. Besides, the city is famous among Russian, Italian, Greek and Turkish merchants. That way, you can fulfill all of your necessities. Furthermore, with the Von-Don canal, the city becomes transport hub in Russia. The city believes to flexibility and ability to adapt to change. Thus, it encourages business development. So, you don’t need to worry about its economic status.

The good thing about the city is that its vast natural resources. If you like being close to nature, your other choice is probably this city. It is 1,800 km to the east of Moscow, which is so far from the capital city. This also what makes the development of the city slow. However, after the development is done, there will be so many job opportunities there. In the mean time, metal industry is the most popular job opportunities in the area.

One thing to remember  about the city is that, although the price of property in the area is quite expensive, you should note that the price is considerably cheaper than those at the capital cities. The city is an Asian outpost, so you may easily find Asian people in the city. Besides, you can see the biggest monument from the Soviet era that stands side by side with traditional museums, the Museums of Local Lore and Art History.

People know the city as the third Russia’s capital city. This is because Kremlin, the most famous building in Russia, is in the city. It is the official residence of the President of Russia.

Being 800 km to the east of Moscow, its residences believe that the city leads Russia in a number of socioeconomic parameters, such as the accessibility of kindergartens and schools, good employment prospects, recreational areas, and the amiability of the people. This is a great information if you want live a promising life in Russia.

Can you mention one place where IT companies’ cluster, like Intel, Huawei, SAP, and Yandex, lies? It is Nishny Novgorov. That also a great information for an IT nerd. It is 416 km to the east of Moscow and is at the confluence of the rivers Oka and Volga rivers. Due to becoming an IT city of Russia, the city attracts so many expat. So, it is a good chance to see many other expats like you.

Also read: popular cities that you must visit in Russia.

While the former is famous as being an IT city, Novosibirsk is famous for both industrial and IT companies. This is the best place for you if you want to be a scientist. There are also so many expat living here due to its charming economic growth and activities. However, the city is in a remote place and learning Russian is a challenge.

Are you a fan of agricultural live? Or are you the master? Ufa is an agricultural region in Russia. It is also a petrochemical region in the country. It is 1,300 km to the southeast of Moscow. The city transform significantly after hosting Shanghai Cooperation Organization and BRICS summits in 2015. However, the residents states that well-paid jobs are hard to find.

You may want to read best time to visit Russia.