When you are thinking about Russia, what kind of gifts come to your mind? Authentic Matryoshka dolls, of course. Gorgeous Russian shawls, another popular option. But what if someone need to present some high-end gifts with more personal touch for business partners, colleagues, and family friends? For a perfect gift in Russia, you may like “Palekh”. 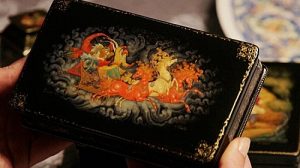 Palekh are miniature Russian folk paintings, drawn and lacquered by handcrafters with egg-tempera paints on varnished articles made of papier-mâché. Unlike ordinary paintings that come in a framed palette, Palekh miniatures may appear on jewelry boxes, cigarette cases, powder cases, spectacle cases, and many others. They are one of the foremost representatives of Russian folk painting, with depiction of various landscapes and figures in colorful and intricate images, giving out magical vibes all around.

The History of Palekh Miniature

Lacquer art nowadays may be a fashionable endeavor, endorses by elites and socialites. But Palekh comes from different background. It is one of the oldest lacquer art in the world that manage to survive the various upheavals in Russian history.

Once upon a time, religious icon paintings were Russian favorite art. However, the history of Russian icons stumbled after the October Revolution of 1917 as communism rose in ranks. In this kind of circumstances, Palekh miniatures that mainly featured landscapes and mythical figures from Russian fairy tales, became the next best option for many icon painters in the region.

In the 1922, Ivan I. Golikov, an artist that recently affected by the revolution, saw a black papier-mâché box from Fedoskino in the Handicraft Museum. Inspired by the work, he created a papier-mâché piece using the Lukutin lacquer technique. Two years later, seven painters made history by founding Old Painting Artel, a type of lacquer art to manufacture Palekh miniatures. In the span of less than a decade, Palekh miniatures won various awards and gained worldwide recognition.

Palekh miniature art is handed down from generation to generation. Even now, hundreds of Palekh artists are still working on their craft in the village of Palekh, continuing the legacy of their parents and grandparents. But the one that gained worldwide recognition is not only the handicraft method itself, but also the portrayals of various mythical figures, particularly the Firebird.

Although you are probably not familiar with Palekh miniatures, you surely have seen the portrayals of Firebird. It is hugely popular in various media, including but not limited to: children storybooks, animation movies, and softwares. In Disney’s Fantasia 2000, the Firebird is a giant, phoenix-like lava spirit antagonist. Firebird imagery is also used as the brand of an open-source SQL relational database management system that runs on Windows, MacOS and other platforms.

The Russian fairy tale Firebird is a symbol of eternal youth and happiness. As such, the portrayal ofFfirebird in Palekh miniatures contains plenty meaningful ideas. It is a representation of Palekh village’s undying dedication to arts, also the well wishes of the Palekh handcraft makers themselves for the longevity of the arts. In this sense, Palekh miniatures as gifts can express your deepest appreciations for the recipients.

When you are choosing a perfect gift in Russia, you will not only find Palekh miniatures with the illustration of Firebird, but also an abundant choices of other folk motives and more modern alternatives. Palekh artists usually recreate images inspired from real life, well-known characters from folk tales, and famous acts quoted from Russian poetry for their miniatures, using bright colors on a black background.

The Palekh painters are the first to draw the famous firebird, but they also created other near-mythical figures. For instance, Pushkiniana, fairytales and poems written by the distinguished Russian poet Alexander Pushkin. Traditionally, the poems of Mikhail Lermontov and Maxim Gorky are fountains of inspiration for Palekh miniatures as well. No less prominent are the landscape scenes from every season.

Here is a list of several of the most famous illustration in Palekh miniatures:

Well, these are only some examples. There are dozens if not hundreds other Russian folk motives. Modern Palekh miniatures may also feature internationally celebrated fairy tales, such as 1001 Arabian Nights, Cinderella, Thumbelina, Alice in Wonderland, and so on.

Palekh Miniatures and Where to Find Them

Palekh miniatures can be found easily in Russian art museums and Russian art galleries. The biggest collection of Palekh works are displayed in the State Museum of Palekh Art. However, there are also small private studios in the Palekh village where you can see and buy the latest work by local Palekh artists.

Along with the rise of e-commerce, Russian Palekh miniatures are also marketed through Etsy and other web-based platforms where you can buy them from anywhere in the country and even abroad. Depends on the size of the main material and the excellence of its artists, prices may range from $100 for a small brooch till thousands of dollars for a large ornamental jewelry box. You can choose one that is most suitable with your budget, but don’t forget to consider the gift recipient’s tastes as well.