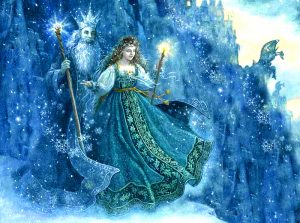 Will you be interested and want to know about fairy tales from Russia? If you are interested in this tale, then let’s look at the myths and legends of the Russian Snow Maiden.

In Russia, there are famous characters during the celebration of Russian Christmas. One of the characters is the Snow Maiden. This Maiden Snow is also known as Snegurochka, Snow Girl and Snowy. Snow Maiden character is a character that comes from the Slavic fairy tale. The task of the Russian Snow Maiden when the Christmas celebration was to accompany and help Ded Moroz to distribute gifts to good children and other people who have good hearts.

The fairy tale about Russian Snow Maiden begins in a forest in northern Russia during the winter. There are an elderly couple who lived in a small wooden hut. A wood cutter and his wife are kind, hardworking and generous people. But actually, they feel sad and lonely because they don’t have children.

One day when the old couple was collecting wood and also clean up an area, the snow piled up reminds them of their youth. Their memories when creating snow sculptures. Then the old couple made a statue that resembled a girl from the pile of snow. They decorate the snow girl statue with very beautiful blue beads for the eyes and red ribbon for the mouth part. They also gave her two dimples to beautify her smile.

The snow girl statue they had finished making was so beautiful. Then the old man said, “Look at this, my wife. Our daughter Snegurochka.” The old man’s wife smiled, but there were tears in her eyes.

When they will go home, they look again at the place where they created their snow girl statue. They were so surprised and could not believe when they saw a beautiful young girl, dressed in white, has a light-yellow hair and shining blue eyes. The girl was walking toward the old couple and said, “If it please you, I come to be your daughter. And I’ll take care of you as my mother and father.” The old couple was so happy to hold her hands and take the young girl to their log cabin. The old couple’s family lives happily. The young girl helps with housework and cares deeply for her parents.

One day, Snegurochka met with Father Frost while walking in the forest. Father Frost reminded her to be careful with her relationship with humans and also a warning because spring will come. And it seemed that Snegurochka had forgotten Father Frost’s warning.

Spring is coming, Snegurochka left her home to meet her lover. Snegurochka listened to her lover playing the flute and the beautiful music made her cry. But when she stepped out of the shade of the forest her feet melted. And shortly later Snegurochka disappeared. Snegurochka’s parents felt devastated and sad. But they understood that their daughter was made of snow and would not be with them forever.

Another version of the story says if the Russian Snow Maiden or Snegurochka melts because of other things. One of Snegurochka’s fairy tales tells that Snegurochka was the child of an old couple made of snow. When spring began to warm the land in the forest, Snegurochka felt sad.

One day Snegurochka went to the forest with several village girls to pick flowers. When it was getting dark, the girls began to light a fire. Then they played by jumping over the fire. Snegurochka also follow the girls jumped over the fire, but suddenly she began to melt and turn into white clouds.

Another version of the same story mentions that Snegurochka is the daughter of Frost and Spring. Snegurochka is a beautiful and eternal girl. She lives in the winter forest. A lonely Snegurochka will gladly let go of her immortality to be able to feel love like a normal human.

I hope this article can give you some information about the myths and legends of the Russian Snow Maiden.