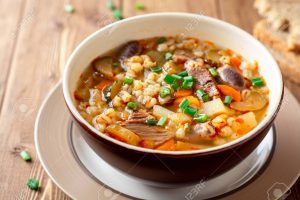 Food is a topic that is always interesting to discuss. Delicious food will certainly make your heart happy.  Delicious food is the most sought after when you visit a country. Food is not just about taste. Every food also has a philosophy and history. Typical food in a country is different from other countries. This is of course based on differences in seasons, differences in spices in the area, and tastes. However, typical foods from a country will give you a new sensation.

One country that is very famous for its cuisine is Russian. Russia has a very distinctive taste of food and certain types of food. And Russian food is also similar to food in the surrounding countries. However, it has a different shape and name. Besides being famous for matryoshka, Russia is also very popular with its soup. If you know a lot about this historic country, you certainly know there are many types of soup in Russia. Soups in Russia vary in shape and taste.

If you visit Russia, you will find many restaurants serving soup menus. Even almost all restaurants in Russia serve soup in their menu list. However, you don’t need to worry about ordering. Because you will taste soup that you can only taste in Russia. Russian soup is different from other countries. Your tongue will be addicted and miss this country. If you are a soup lover, Russia is the most right place to visit. Starting from vegetable soup, fish soup, and meat soup available there.

In this article, we will present a full range of juicy soups that are very delicious and we highly recommend you try. You will not be disappointed. Here are 4 juicy Russian soups only in Russia.

The first soup that you have to try while visiting Russia is ukha. Many tourists say that ukha is the best Russian cuisine they have ever tasted. Ukha is a fish soup with clear broth. And what is so remarkable is that ukha existed when the Russian state was formed. Ukha is made from various types of freshwater fish. Many say, the taste of ukha is less delicious when using saltwater fish. Freshwater fish are used such as catfish, northern spears, or ruffe. Ukha also contains vegetables such as parsley root, leeks, potatoes, bay leaves, dill, tarragon, and green parsley. The spices used as herbs are black pepper, turmeric, nutmeg, and fennel seeds. Fish such as mackerel, tench, sheatfish, and burbot are sometimes used to add flavor to soup.

Although many say freshwater fish are better than saltwater fish to make ukha, many restaurants innovate using salmon or cod fish. And apparently, many like the Ukha soup with salmon or cod fish. Fresh flavors of salmon and cod make ukha more delicious and fragrant. In addition, parsley and spices make ukha a very distinctive fragrant smell. Just smelling it makes your stomach cry for food. The taste of ukha is very tasty, so it is very suitable to be used as a menu for breakfast, lunch or dinner. Russian Muslims also often make ukha as a meal to break their fast. Ukha is the best choice for Russian people when winter arrives. Fragrant and warm gravy from ukha will beat the very cold weather.

If you are interested in ukha, you can find it easily in restaurants around Russia. However, it will be more interesting if you make it yourself at home. How to make ukha is quite easy. You can see a tutorial how to cook ukha from youtube or ask your neighbors.

The next juicy soup that will make you addicted is rassolnik. Rassolnik is a traditional Russian soup made with pickled cucumber, pearl barley and pork or beef kidney. And for those of you who are vegetarians, there are also rassolnik which only contain pickled cucumbers and other vegetables, without pork kidney or beef kidney.

The most important part of rassolnik is rassol, which is a liquid from pickled cucumber with various other herbs. Rassol is often used as medicine when drunk. Because Russian people are very fond of drinking vodka, if they are drunk rassolnik is their favorite choice. Pickled cucumbers make the rassolnik taste very distinctive. The juicy rassolnik sauce feels very fresh and delicious. For those of you who are Muslim, when you want to taste rassolnik you should choose rassolnik with beef. Because most restaurants serve rassolnik with pork kidney. If you feel doubtful, you can make it yourself at home. This will be very interesting!

Sorrel soup is a favorite food of the Russian people when summer comes. Sorrel is a fresh, low-calorie soup. This soup is perfect for those of you who are vegetarians. Sorrel soup is also known as green shchi. This soup is made from broth, salt and sorrel leaves. But sometimes also added potatoes, carrots, eggs, and dandelions. The ingredients for making sorrel are usually planted in dacha, or you can buy them from farmers.

Sorrel is a very healthy and low-calorie soup. So you can enjoy it whenever you want. How to make it is also very easy. Sorrel soup is also very much sold in Russian restaurants. Sorrel has a very fragrant smell and a very distinctive taste.

This Russian soup is also very suitable for you who are vegetarian. Shchi is a typical Russian cabbage soup. Sorrel-based shchi soup, spinach, nettles, and similar plants called green shchi. Sometimes shchi is also made from sauerkraut, which is finely sliced ​​and fermented cabbage. Shchi using sauerkraut is called sour shchi because it tastes sour. However, this sour taste makes shchi feel more fresh. Just like other Russian soups, shchi has a very fragrant and distinctive smell.

Russia has so many types of soup. Russian people really like soup and almost always eat soup every day. Russian soups are also very tasty and healthy. They still use traditional spices to maintain the taste of the soups. Besides that, how to make Russian soups is also very easy. If you are interested, you can make it at home. But if you don’t want to bother, almost all Russian restaurants serve soup as their mainstay menu.

One type of soup that is very suitable to enjoy during summer and winter is the juicy soup. Of course Russia has many kinds of juicy soup. And the 4 juicy soups that we recommend to you are the best and most famous. You will never be disappointed to try it. And Russian soup is also very good for your health. Those are  4 juicy russian soup only in Russia. If you visit Russia, eating Russian soup is a must.