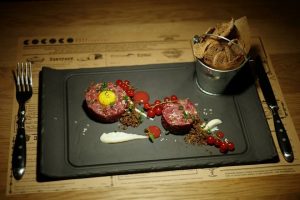 There are a lot of charms that Russia offers to the Tourist. This country has various cuisine and also beautiful cities. There are some cities that are popular among the foreign tourists such as Moscow and St.Petersburg. St.Petersburg is a City of Port on the Baltic Sea. Here, we can visit some signature place such as Hermitage museum, winter palace and many more.

Although almost all the Russian restaurants in St.Petersburg offers an authentic Russian food, but one of the most popular restaurant is a restaurant named COCOCO. This restaurant offers a stand out concept because the chef here take a modern approach to Russian Recipes and transform them into a new creation that still hold on the traditional taste and recipe. The interesting thing about this restaurant is that the menu on COCOCO are changing depends on the product availability just like the Russian household. It always changes because they use the local ingredients source. The foods in this restaurant also become most popular foods in ST.Petersburg during Ramadan since they also offer a halal dish.

TSAR was title held by all rulers of unified Russia similar to a king. Based n the name, this Restaurant promise a royal treatment and also delivers a true atmosphere of an aristocrat’s dinner table. This restaurant serves extensive Russian menu features many delicacies and traditional dishes around the country. So if you want to get the most popular cuisine in ST.Petersburg Russia it will be a good choice to come by Tsar.

This restaurant is serving fine dining fares that are suitable for you who love a luxurious thing. In this restaurant you can eat and enjoy the caviar dish although you still can order the traditional menu of Russian. If you curious about the al about caviar dish, you may come to this place. This Restaurant is located in Tverskaya Street, 12, St Petersburg Russia.

The last restaurant on the list is a fancy restaurant called Gogol addressed in Malaya Moroskaya Street, 8 , St Petersburg. This restaurant serves almost all Russian cuisine also the dinning menu that influenced by European dish.