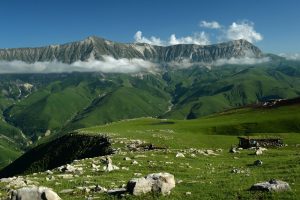 Facts of Chechnya, the southern land is no longer the troublesome part of Russia. In fact, it’s now one of the safest places in the country. Of course, you should still educate yourself of Chechnya’s culture and traditions, if you are planning to go there. Historically, Russia in the past conquered many Islam territorial and immerse the people into Russian country and influence each other. Take example The Tatarstan’s that occupied Kazan which is now the third largest city in Russia. Chechnya conflicts with Russia doesn’t end like the Tatarstan’s.

There is more to Chechnya that can be explore. The stunning mountain landscapes, picturesque lakes, and friendly people define this part of the Northern Caucasus.  Although most foreign governments consider it is too dangerous for travel purposes to this part of Russia. Moreover, Large Russian investments improved the infrastructure continuously in recent years.

Those who come to Grozny, the capital of Chechnya will find a capital reborn. There are many new residences and shopping malls build as a sign of economic development. Chechnya still struggles to raise the city tourism. Here are some important facts about Chechnya that you should know.

The distance from Moscow to Chechnya is quite far, the visitor can the land or the plane to get here. You can take a direct flight from Moscow to Grozny from Vnukovo Airport.  If you fancy the long road, you can fill up the car with fuel and go on a road trip. Grozny is about 1,850 km south of Moscow the journey is quite comfortable. The road is paved, unlike much of the countryside in Russia. The road trip will take you to green mountains and great scenery with few houses in sight. You will pass through cities like Voronezh and Rostov-on-Don, and you’ll also get to see provincial Russia in all its glory.

Chechnya is a conservative region with a dominant Islamic population. A Female traveler needs to wear a headscarf to avoid any unwanted attention from the locals. You need to dress simple, don’t reveal too many skins and be polite to anyone. The people are super friendly and will invite you for dinner with their family.

The Chechen woman is modest, wearing a headscarf and wear a really long dress and non-revealing. Local police officers are polite to you, but there will be several spots where tourist need to show the necessary document and answer several questions.

The capital city of Chechnya is Grozny. It is a small town but shining like a mini Dubai. The main attractions in the city are Putin Prospect, the enormous complexity of the President of Chechnya, Grozny-City Hotel and “Berkat’ market. The market is the biggest open-air market in modern-day Grozny. Other cities such as Aleroy and Vedeno are a mountain part. There are many cities with impressive building and modern landscape due to reconstruction after the war in Argun and Gudermes.

4. What to do in Chechnya

Muslim tradition here limits any consumption of alcohol, cigarettes, or hookah, not even in fancy hotels and restaurants. Locals go to a healthy lifestyle and enjoy sports, culture, guns and traveling.

The majority Muslim here enjoy almost the same food that you can find in the Arab country, such as shashlik, kebab, and muttons. You will not find any dish made from pork here. There are numerous cafes serving local cuisine with an amazingly affordable price.

Chechens lived in the mountains and ate what they grew or produced. Therefore the main ingredients in their dishes are lamb, poultry, cheese, curd, milk, flour, corn, pumpkin, wild garlic, nettle. However, despite a variety of ingredients such as meat, wild garlic, and nettles, the Chechen cuisine is still soft, and not too spiced. The facts of Chechnya people are very healthy is the result of the influence of their national cuisine.

There are more Chechens in the capital, Grozny,  you will frequently hear the Chechen language in public, but almost everyone will speak Russian. In some parts of Grozny, there are many Chechens who have studied and speak English well. Many have lived abroad in countries such as Germany and moved back with their families after the war. Public signs are in Russian, rather than Chechen. Since Chechen is a difficult language to pronounce, Russian will be the best bet for most travelers.

As an extreme Islam believer area, you need to keep several things in mind before going there. Visitors are welcome to the area, there is some checkpoint, you need to explain well the reason for your visit. For a female traveler, you need to come here with a male escort and need to wear non-revealing clothes. Talking about politic is a big no, better to enjoy the scenery and the people hospitality.

Due to the fact this is a Muslim majority area, it is safe to say a friendly place to visit for Muslim travelers. It easy to find halal food here and the atmosphere is very Islamic. Moreover, there are many mosques to see and friendly people that eager to help anyone. Chechen is a part of Russia that has not gain much popularity and can guarantee a peaceful visit for anyone.