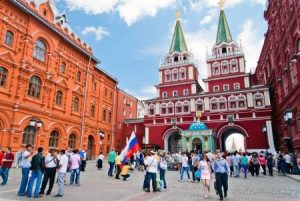 Some can say that this place is one stop destination for many historical monuments of Russia. This is true when you’re in Red Square, just take a 360 view and realize, that every corner of the square displays at least distinct monument. You’ll be confused what to visit first. Hence, here we created a list of 8 Famous landmarks in Red Square – Moscow.

St. Basil Cathedral located in Southeastern of Red Square. It is considered the most elaborate sight at Red Square for its striking display of architecture. Thus it can be said that it’s almost the center of the red square. St. Basil was built in 17 — as ordered by Ivan the Terrible.

This perhaps is one of the famous building in Russia. And one of the 8 famous landmarks in Red Square-Moscow. You might recognize the cathedral because it’s so commonly printed on Postcards. well, this UNESCO world heritage is the icon of Russia.

It’s exterior is striking with an arched gate that some speculated are influenced by Asian architecture. Also, it has Domes that resembling onion (very uncommon compared to the Byzantine style that popular during the era). the colorful paint is a depiction of heaven. While it’s overall design is a resemblance of burning bonfire.

The seat of the Government of Russian Federation, The Moscow Kremlin is certainly one of 8 famous landmarks in Red Square-Moscow. This is where Russian governance carried day by day. It’d a walled fortress that hosts palaces as well as cathedral inside. During imperial Russia, Kremlin was the seat of the emperor (Tsar).

Lenin MausoleumIs the tomb of the Soviet leader Vladimir Lenin. Located in the center west of Red Square, the Mausoleum is where the leader’s body has been displayed since his death in 1924. Designed with red granite, the site attracts many curious visitors who want to get a glimpse of his embalmed body. Entry to this Mausoleum is free of charge.

This is where visitors will learn about Russian history in one place. Million relics and artifacts since prehistory era are on display for visitors. the museum has million of collections. Ranging from wooden objects, ancient ceramics to old books and manuscripts.

Located in the far opposite of St Basil Cathedral, State Museum is among must visit in Red square. The museum has coin collections, the biggest in Russia. There’s also a library inside. The library is where old manuscript from as old as 6th century are preserved.

Kazan cathedral reconstruction is finished in 1993. But the history of the cathedral itself is dated back since 1625. It was built by the order of Prince Dmitry Pozharsky. The church used to serve as a more solemn place for Russian Orthodoxy worshippers to pray as opposed as its grand neighbor St Basil Cathedral.

The Soviet era, which discouraged all practice of religion, planned to demolish all the cathedrals in Red Square. This is in order to make way for the heavy artillery and tanks for the military parade. Although St. Basil was saved from demolition, the same fate didn’t apply for Kazan cathedral. In 1936, the church was demolished.

Then the communist Soviet regime fell in 1991. Afterward, work on reconstructing Kazan Cathedral was carried. Thanks to this reconstruction, now the cathedral is there again at Red Square for everyone to visit.

Iberian gate and chapel is basically two gates and a chapel standing between them. The gate connects Red Square with Manege Square. It stands between State historical museum by the right and Moscow City hall on the left. The first construction of the gate was carried in the year 1669, making this site among the oldest building in Red Square.

Iberian gate and chapel also experienced a similar fate as Kazan Cathedral. During the Soviet era, Stalin ordered the gate to be demolished because it was not wide enough for military equipment to pass through. After the Soviet fall, in 1994 the rebuilding effort is carried for both the gate and the chapel. Although now the gate is more or less a replica, it has the exact same design and prominence among Russian people as it was before.

GUM – Glávnyj Universáľnyj Magazín (main universal store) is both a modern shopping mall and old historical site. The place is formerly known as the upper trading rows, built in the late 18th century. It is located just the opposite of Kremlin at red square. The place is an important part of Russian history as well as for its economy.

From the exterior, GUM is basically a monument. It easy to mistake this place as a palace or museum. White bricks and arched glass windows adorn its exterior. The distinct arched glass ceiling decorates the interior. Rows of stores stand along the two open corridors, connected by indoor bridges.

After long years of perilous history during the Soviet era, GUM is opened again for the public in 1953. Today the place is one of the most prominent and historic shopping malls in all of Russia. Total 100 brands are represented here, both local and international. GUM provides all in one entertainment for visitors visiting Red Square.

The mall also has a cinema. Restaurants, both indoor and outdoor, available in abundance. The kids area is also available for children to play. One of the most popular thing tourists do here is queuing for the popular Russian ice cream.

Located in front of St. Basil Cathedral, the Minin-Pozharsky monument is a bronze statue of Prince Dmitry Pozharsky and Kuzma Minin. The statue was erected to commemorates their significant contribution to defeating the Polish army, which invaded Russia in 1612. The construction is to celebrate the 200th anniversary of the event. It was started to be built in 1816.

Now visitors do not need to be confused again when they visit Red Square. The list above is curated from the most important sites to the less. But of course, every historical site in Red Square has a story of their own. It is also wise, if you have time, you can just visit all of them.