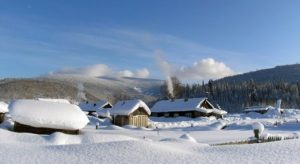 Siberia, which is also called as Russian Sibir, is one of the largest regions in Russia and northern Kazakhstan. This region constitutes all of the northern Asia. Siberia lies between Ural Mountains in the west and the Pacific Ocean in the east. It also extends from the Artic Ocean in the south to the hills of north-central Kazakhstan. It also lies between the borders of Mongolia and China.

The total area of Siberia these days is about 5,207,900 square miles (13,488,500 square km). In the contrary, in the narrower Russian definition, the area is 2,529,000 square miles (6,550,000 square km). It consists of two economic planning regions, which are Western and Eastern Siberia. In this region, there are also some republics. The republics consist of Buryatia, Khakasiya, Sakha (Yakutia), Altay, and Tyva (Tuva).

The region itself is divided to four major geographical regions. In the central of the region, there is the east side of Yenisey River. It is a large area which consists of plains and Central Siberia Plateau. In the west of the region, bordering the Ural Mountain, is the large West Siberian Plain. The Ob and Yenisey has drained this plain. Its region also contains wide tracts of swampland. In the eastern of Siberia, there is also basin of the Lena River. It separates central Siberia from various mountain ranges, and upland massifs. It also intervenes the basin that will make up the north-eastern Siberia. Lastly, the smallest from other regions in Siberia is Baikal area. It is located in the centre of Lake Baikal in south-central part of the region itself.

Based on Tatar term, the name of Siberia itself means ‘sleeping land”. It is known for the length and severity because of its snowless winters. In fact, in Sakha, the minimum temperatures are around -68oC (-90­­oF). While there is reduction of precipitation, the climate becomes more extremely harsh in the eastern. Most of the vegetation zones extend eastern-west across the vast area, such as tundra in the north, taiga, or swampy forest, and in the basins of the south.

Siberia has mineral resources wealth, especially for its coal deposits, oil and natural gas, ore, iron, diamonds, and gold. Mining and Manufacturing were the major factors which underwent rapid development in Siberia in the second half of the 20th century. Steel, aluminium, and machinery are among their top products. Agriculture is having lack of their rapid development and is confined to the southern side of Siberia. This sector mostly produces wheat, rye, oats, and sunflowers. You can read more information about Siberia in 5 Amazing Facts About Life in Siberia.

These days, the region has being a perfect destination for all of the tourists around the world. But foreigners have to pay attention to the extreme climate in the region. It is one of the coldest place on earth. In the winter, the temperature can drop to -60oC and you will feel a lot of pain on your skin, even if you have been wearing such thick cloths. There are some facts that you have to know if you plan to live in Siberia for a while or long time. In facts, there are 4 Important Facts about How to Live in Siberia.

Life in Siberia is not simple, it’s harsh, especially in the winter. Besides having bad condition, many people have lived in Siberia for a long time because the have adapted to live in there and maybe they have a couple of ways to trick that. As mentioned before, the temperature can reach -60 oC in the winter and to avoid getting frostbite, the people cover themselves with several layers of clothes up to their eyes.

Winter clothing in the region is like a real art. It has been an object that shall be possessed by the people. It is made from fur, cotton, and wool and usually it is multi-layered. There are no short coats or something like that because it will be useless. Every part of your body must be covered up. You can also read about Sweet Facts You Need to Know About Siberian Cats.

It is a common thing when the cars on the street never turns off their engines. If you do the opposite in this freezing condition, you will not be able to turn on your car’s engines again and you will have to wait until spring season is coming. The car that will be used in Siberia must be prepared in special way to adapt in that conditions. It will be insulated, you also have to install second layer of window and heating of diesel fuel. The tires have to be filled with special things to avoid freezing. In general, the people in Siberia is using Russian made cars for daily car. It is because imported cars often cannot survive in Siberian conditions, especially for its extreme low temperatures.

In Siberia, there are no farmlands existed. Even if it exist, there are only a few of them. The lands are full of rivers. Some of them are filled with swamps and taiga forest that are thick. For that reason, it makes the region where scarce population is clustered. They are clustered in small towns. In which the towns are surrounded by wild nature. Also, for that reason you may rethink about your opinion on distances.

If you think that hundred of kilometers are too far and extra to travel for days, then you are wrong. It is common for the people to visit a house of friend who live more than 100 kilometers away. And the fact is it is also not strange to travel hundred kilometers. In which the destinations are only to fish or for a business trip in a weekly basis. That is why travelling in Siberia will take you more time than your usual travel, although there is no traffic in this region.

The Western part of Siberia is the main source for Russia’s oil and gas. That is why the region is wealthy. Way wealthier then most of Russia. The result for this is a better facility for human needs. Better facility include schools, clinics and also hospitals. All of them are well supplied, so the people of the region receive a better service. All of elective classes are also free. Such as theater class, language class or even sports. You can develop your skill and doing your hobby freely in the region. The visible attitude of the people is they work honestly. And for that, they receive a good amount of pay. Most of the towns in this region are relatively small. Therefore, there are not really a lot of things to do. That is why, the region itself is not that dynamic.

That is all for 4 Important Facts About How To Live in Siberia. Siberia is known for it’s cold weather, but after all it is still an interesting place to live in. But you need to adapt to how the people should live in the region. Things like turning on your car engine, and always cover your whole body are things to start. You can also get a better service by the facilities in the region. On the other hand, you have to reach a long distance to go anywhere. And yet, that is not a strange thing to occur in this cold region of Russia. You can also get more information about Siberia in articles such as 4 Fascinating Souvenirs From Siberia, 6 Surprising Facts About Siberian Vodka, and 4 Differences of Eastern and Western Siberia.