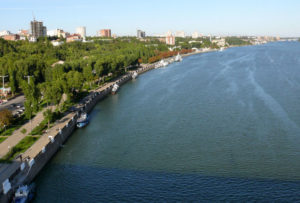 Don River, is one of the largest rivers of Russia. It is also known as the 5th longest river in Europe. Based on the history of Russia, Don River has been known as the vital artery since Peter 1 the Great. Peter 1 the Great is the one who started the hydrographic survey of its course. The Don River disgorges from the small reservoir of Shat in Central Russian Upland. The small reservoir located near the city of Novomoskovsk. The city is 60 kilometres southeast of Tula (120 km south of Moscow).

The river generally flows to the south for about 1,870 kilometres (1,162 miles). The flow will end up at the Gulf of Taganrog in the Sea of Azov. It lies between the Dnieper basin on the west and the Volga basin on the east. It also lies between the tributary of the Volga, Oka basin, on the north. In the middle of the river, the Don River forms a very large arc with the Ilovlya river. It lies from the confluence with Chornaya Kalitva river to its end. Near the top of the arc, lies the Tsimlyansk Reservoir. Between the upper part of this reservoir and the Volga river, there is a canal built. The canal used as the ship route. The distance of the canal reached 50 miles. Every day this route has being used as one of the trade or tourism lanes in Russia.

The Don River is one of the place that should be visited when you travel to Russia. It is famous for its beauty and also the interesting history. Which is more reason for Don River to be one of the popular tourist destination. Therefore, we will give you some information about important history of Don River. Some of the things that will be covered in this article is about the river’s physiography. There is also about its hidrology and history. To read more information about Don River you can check on 4 Unknown Things About Don River in Russia.

At the upper side of Don River, the river flows along the eastern edge of Central Russian Upland. The water flows through a narrow valley. The right bank was later introduced with 160 feet heights above the river. It is located at the cities of Dankov and Lebedyan. The left bank is being used as the border of a flatter floodplain. The river itself widens into small lakes with its depths varied. The depths range from a few feet to 33 feet. The maximum width is 1,300 feet.

There are valleys in the middle of the course to the starting point of the Tsimlyansk Reservoir. The valley at both side of the river widens for about four miles. It also marked by relict channels, floodplains, and smallest lakes. For the bank, especially the right bank gradually become steeper. It become steeper with predominated chalk and limestone. There is also sandstone that covered up the bank.

In 1953, the Tsimlyansk Reservoir had completed by nearly 190 miles. The reservoir located along the lower course of the Don River. The reservoir has an average depth for about 30 feet. It has maximum width of 25 miles with nearly 1,050 square miles area. The valley at the lower section of the Don has width of 12 to 18 miles. It is surrounded by a huge floodplain. The river channel has depth that reached 66 feet.

The water level at Don River varies overtime. It depends on the condition of the region and the season in current time. In the upper course, the water level can reach 40 feet. It can reach 15 feet more than the middle course and also 20 feet more than the lower course. The lowest levels are in autumn and winter. Otherwise, when spring is coming, it reaches the highest point.

In general, the increase in water level height caused by strong winds from the sea. In fact, the average rate of discharge at the end of the Don is about 900 cubic metres per second. But, it is just the predicted qualitative result. Sometimes the river experiences variation in its water flow during the year. So, the volume is not always constant. It does not always flow in the same volume, depends on the velocitt of the flow. In which, as mentioned above, the velocity is influenced by the strong winds.

Because of the winter season in that region, the northern side of Don River starts to freeze by mid-November. The surface of the river is clear of ice by mid-April. The lower course freezes on different time and location. It has been frozen from the end of November until the end of March at kalach-na-Donu. On the other hand, it has been frozen from mid-December until the end of March at Rostov-na-Donu. You can also read about lake in Russia in 4 Facts of Lake Baikal as The Deepest and Weirdest Lake.

Some of archaeological evidences prove that Don River had been formed from the Upper Paleolithic (40,000-13,000 years ago). Some of which also prove about the first existence of survival near the river. Especially at the beginning of the 2nd century BC. At that time tribal people occupied and utilized the valley. They did it by rearing and raising agriculture to survive. Most of the time they would stay in the current place only in short time. It usually only for a couple of months. After a while, they move again to search for another place to stay.

At the first half of the 13th century AD, the Tatars conquered the region. In the middle of 15th and 16th centuries, the Russian state expanded their territory. They expand southward, including Don River. In that time, lower Don was known by most of the ancient geographers. While the middle and upper Don had not been mapped precisely. It was finally mapped after the conquest of the area by Muscovy during 16th century. In the same time, the famed Don Cossacks declared themselves in independent military settlement. The settlement occurs along the lower and middle Don. But it ended after the area came under control of tsarist control.

In the late of 14th century, princes of Ryazan found the fort of Donkov. The fort stood on the left bank. It was 34 kilometres from Dankov. The fort is one of the building that mentioned a lot in books of Donkov. In 1568, the fort was destroyed by the Crimean Tatars. Some of the fort completely destroyed. But, some part of the fort still barely stands. After a while, for years it was restored at a better location.

That is all information about important history of Don River. Don River has a long history as the largest river in Russia and longest river in Europe. There are a lot of interesting facts surrounding it. Including the hydrology and physiography of the Don River. With its complicated history, the Don River is one of the place that still have mystery. The mystery including myths are yet to be solved and explored. Until these days, Don River still one of the most famous tourist destination.