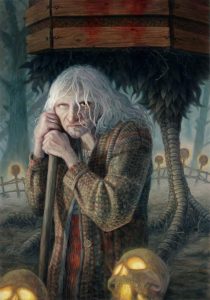 For those of you who don’t know about Baba Yaga, let’s look at the myths and facts of Baba Yaga, the Frightening Witch.

Baba Yaga is a famous witch figure in children’s fairy tales in Russia. She is also a very famous figure in Slavic folklore. Baba Yaga is a witch who lives deep in the forest. The legend about Baba Yaga spreads a lot from people who live around the forest and still strongly believe in superstitions and myths. Regarding the characters from Baba Yaga itself in folklore and fairy tales, it has many different versions because of different cultural influences.

I think there are still many people who don’t know this witch named Baba Yaga. So, in this article, I will discuss the myths and facts of Baba Yaga, the frightening witch.

Maybe some people wonder. Why is this witch named Baba Yaga?

The name Baba Yaga consists of two words, “Baba” and “Yaga”. These words come from the Slavic word. The word “Baba” can be interpreted as grandmother, old woman. While the word “Baba” in ancient Russian language has a meaning witch, midwife, or a fortune teller.

The word “Yaga” does not have a definite word meaning. But the word “Yaga” is often interpreted as evil or horrified and trembling. You need to remember, the name of Baba Yaga is also referred to as Baba Roga in South Slavic. So, it can be concluded if the name Baba Yaga can be translated into the evil old lady or the evil witch.

The windows in her house function like eyes to watch around. The door in the house is equipped with a key like a mouth because it has sharp teeth. To be able to enter the unique wooden cabin, Baba Yaga will enter through the chimney. There are several sources that say if the house actually doesn’t have a door. If you want the door to be seen, then say the magic mantra, “Turn your back into the forest and front to me.”

While the fence around the house of Baba Yaga was made of poles built from human bones. The fence of the house was also decorated using a human skull, which in the eye socket can light up and illuminate the forest. Many people say if anyone managed to get into the house, then their fate depends on them. Maybe you can’t go out again. Isn’t that terrible?

Baba Yaga is described as an old grandmother that is scary because she has iron teeth as thin as a skeleton. But she has a very large appetite and her body remains thin until her bones are visible. Baba Yaga has a long nose. When sleeping, the sound of Baba Yaga’s snoring made the ceiling of her hut vibrate. She also slept lying in all directions above the base of an ancient brick oven.

Usually, a witch in the fairy tales and folklore of a country can fly by using a tool. Likewise, with Baba Yaga. Baba Yaga can fly throughout the forest by using a giant mortar. She also holds a large pestle in her right hand that functions like a rudder when she flew. Baba Yaga also holds a traditional broom like the one used by witchs in the left hand which serves to erase her trace. Pestle and mortar owned by Baba Yaga is also used to grind human bones that she had eaten.

Baba Yaga has the power that she can use to help or even hurt anyone who passes in front of her. People who come to the forest in search of Baba Yaga because they want to get answers, truth, wisdom or other things, must complete some senseless tasks from Baba Yaga. That is also if the people were able to find Baba Yaga’s hut. If those people are able to complete the task given by Baba Yaga well, then they will get what they want. But if the task was not completed and the people could not find a way to escape from Baba Yaga’s hut, then they would be cooked to become the meal of the witch.

Baba Yaga is not only known as a villain, but she can also help someone, as in the fairy tale “Vasilisa the Beautiful”. Vasilisa fairy tale that successfully fulfill the task given by Baba Yaga itself is also quite famous. Vasilisa, the beautiful girl who was asked by her stepmother to search for light into the forest, was able to complete the task of Baba Yaga well because of the help of the doll who was blessed by her mother and also because of her kindness and sincerity.

I hope this article can give you some information about the myths and facts of Baba Yaga, The Frightening Witch.