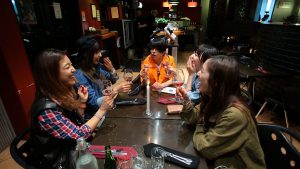 Every country has different historical, ethnic and civilization backgrounds. This is what causes cultural differences in each country. In fact, in one country can have differences in culture and civilization between one region and another. Culture in one country is not necessarily suitable for another. It could be a culture that is considered good or something that is normal in one country is considered inappropriate in another country. That is the same with Russian society.

Russia is the largest country in the world that is very rich in its landscape and history. Russia is quite popular among foreign tourists. Because in world war, Russia is a superpower like the United States. So that the history and culture of this country is very attractive for foreign tourists.

1. Eat With A Loud Gasping Voice

Everyone has  a different way of eating. However, without us knowing it, our way of eating can be influenced by local culture. As in the Eastern countries, you have to eat slowly, and also in Russia, which has different eating habits.

Russians are most dislike and uncomfortable when they hear loud panting while eating. Maybe this is a trivial thing. But that’s how culture and manners are in Russia. They will be very uncomfortable and may reprimand you if you eat with gasps and loud noises. Maybe in some southern countries, eating with a loud voice and mouth wide open is common. However, for Russian people it is a bad habit and only rude and disrespectful people who eat with gasps or inhale.

So, when you eat in a restaurant or at a Russian home, you should adopt a way of eating like a Russian. Closed mouth with no sound. You must get rid of your eating habits with your mouth open, in a hurry, and loud. You will be considered a person who is rude, hard, and disrespectful. So maybe they won’t serve you and be good friends with you. Try to adjust when you go to a country with a different culture from your country.

2. Don’t Pay For Dinner For Women

The next habit that is considered rude in Russia is when you bring a woman to eat but does not pay for it. Or maybe just pay for yourself. No matter the woman you bring is your girlfriend or your friend.

For Russian people, when you invite a woman to eat and don’t pay for it, you indirectly harass her. This is the opposite of western countries. For them women have the ability to pay for themselves, when there are men who want to pay for a woman’s dinner, it is considered a violation. However, for Russians, paying for a woman’s dinner is a very good thing. With that, you are considered to have respect women and respect them. You are also required to treat women gently like a knight.

How? If you want to be considered a knight by a Russian, then pay for your woman’s  dinner. Especially for those of you who have a Russian lover. This is certainly very important for your relationship.

Maybe this is commonly done in several other countries, and is not considered bad at all. Maybe this is a trivial thing for you, but not with Russian people. They will be very surprised when you enter their house with shoes. They consider this to be rude and bad behavior.

Russian people have the habit of taking off their shoes when they enter the house. Then replace it with traditional Russian slippers, namely “Tapochki”. All Russians have slippers in their homes, winter and summer. And they also always provide these traditional slippers for their guests.

So, when you enter Russian homes, take off your shoes and they will definitely give you a pair of traditional tapochki sandals to wear inside the house. Of course this is very important for you. So that you are good and polite for them. You must be able to adjust and try to know the unique culture in Russia.

Sportswear is even a fashion trend in the world. Because it looks more casual and can be combined with other accessories to make it look not too sporty. But, for Russian people this is a big thing. When you wear sports clothes outside, then you will be the center of attention for the unpleasant stares of Russian people. For them this is an impolite thing. You will be considered a woman who is rude, hard, and very bad.

Because Russian people only do sports in the fitness center. So, when there are women who use sports clothing outside it will look very strange to them. Clothing for Russian is very important. They will use their best clothes on every occasion. Then wear clothes that are in accordance with the activities and place.

Of course this is contrary to western countries. Whistling for them in the usual way and activities that are quite exciting and entertaining.

That is 5 foreigners  habits considered rude in Russia that you must know. Russian culture is truly very unique. And not only Russia, every region must have a very unique culture. For those of you who want to travel to Russia, have a Russian friend, or a Russian girlfriend, then these five things are very important to you if you want to keep in touch with them. You also have to start learning to worship culture in other countries and adjust yourself. As long as the culture does not harm you and has a good effect, just follow it.

Hopefully this article is useful for you lovers of all about Russia. And help you adjust to the Russian environment when you will visit there.