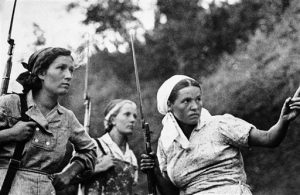 If Russian History isn’t extensive already, history of Women in Russia could make a topic worth writing a separate book to. History of women in Russia varies from era to era, and it differs too based on social status. One thing in common about Russian women throughout history is that they’re strong, formidable, and they’re not afraid to fight for what’s right for them.

The formation of soviet union breathes new air of feminism movement in early 20 century Russia. Along with the fall of the Russian Empire, it was the time to abandon old ways of living. Women see this as a way to break from old gender role. They wanted to try out new things. They were successful, as the new regime create many new laws in expanding women’s role in Russian society. There are many interesting stuff things to learn from this era about Soviet women, and here are the 8 facts of women in Soviet Union.

1. Women during the Soviet Era is a vital part of the workforce

Women were no longer necessary to remain at home performing domestic duties. The industrial movement required more people for the workforce, and women become vital to this. There was a sharp increase in women workers. Over one million women joined the workforce during the early 20 century. Between 1914 and 1917, there were 250,000 women working in many industrial centers.

Not only limited to factories and industrial centers, But Soviet women were also eager to expand their knowledge through various kind of profession. Women during the Soviet regime finally had the right to become an attorney, a profession that before strictly was reserved for men. Women fought for equal rights at work. The government also issued “Equal pay for equal work” law so women and men would have the same salary in the same profession.

Plenty of old universities started to open for female applicants. Some universities are founded to cater specifically to female students. Female students in Soviet union can choose and audit their courses at the university. In Russian society alone, a higher education has begun to be considered as a necessity for women.

Russia before the 20th century has high illiteracy level. Only 13% of women were able to read and write. The new Soviet regime then made continuous effort to increase literacy, especially among women. The change was gradual. In 1926, the literacy level of the Russian population was 56,6 %. The number increased in 1937. The census data showed that by 1937, the literacy rate was 65% for women.

4. The first woman to have flown in space

Not only limited to earthly business, women in the Soviet Union believes that only sky is the limit. As Soviet Union tirelessly worked on their space exploration, women tried to chip in. When the Soviet government sought for potential future female cosmonauts, 500 women were eagerly applied. Among five selected, Valentina Tereshkova was chosen to be the first woman to be sent into space. This is probably the most impressive among 8 facts of women in Soviet Union.

The rigorous 18 months of training was not something discouraging for Valentina Tereshkova. She had been formerly a factory worker, which took parachuting as a hobby. The dangerous mission took place on June 16, 1963, with Vostok 6. The mission was a success although there was a near fatal error that could have endangered Valentina’s life. After completing her mission, Valentina Tereshkova was awarded a hero and her achievement is highly celebrated especially among women.

There are many laws created in benefit of women during Soviet era. There was a drastic change regarding marriage. Soviet women finally had a right for filling a divorce. They can keep their own property and earnings from their husbands. And they’re no longer tied up with old wife roles and duties. The new law was legalized on Code on Marriage, the Family, and Guardianship. This law is ratified in October 1918.

Along with this, a more radical law such as about abortion is made. Russian women are the first women in the world who were allowed to have a legal abortion in state hospitals. The procedure was also free of charge. Should a woman decide to keep her baby, the state still grants illegitimate children the same right as children born within a wedlock. Open marriages also became more common and accepted.

Zhenotdel was founded by Russian feminists Alexandra Kollontai and Inessa Armand in 1919. They were backed fully by the Communist Party of the Soviet Union, where they participated as active members. Zhenotdel mission is to fight illiteracy among women. They also educated women about the new laws about marriage, education, and work. In general, Zhenotdel wanted to help to lift up women status among Russian society.

The organization helped make several laws benefiting women, including the abortion law. They actively took an active interest in women’s problems all over Russia. In central Asia, Zhenotdel helped liberating Muslim women from strict rules and age-old limiting tradition, including by a de-veiling campaign. The organization continued to serve as a channel for women to the state until 1930. The Soviet government later disbanded Zhenotdel with an argument that communism would solve all the women’s problem instead.

7. Women can now have a right to vote

Soviet women had equal civil rights such as a right to vote and a right to be included in civil service. They can be a public attorney. Soviet women can join to be a member of Red Army, the Soviet armed forces. By 1920, up to 50,000 women had joined the Red Army. They make up 2% of the Soviet armed forces. Their role varied, from infantry to navy.

8. Took active roles during the war

During WW I and WWII, Soviet women showed an admirable trait of endurance. In the time of perils, they took active roles in making sure their country survived through both wars. Wives and daughters tended the farms while men and sons went into the battle. Women made sure that food supplies are intact in times of war.

Some women participate directly in battle, commonly served as nurses. There are not few who also take a combat role in the front lines. Soviet women are skilled pilots. They were also good at marksmanship, with many serving as snipers.

So those are 8 facts of women in Soviet Union. Among all the feminism movement that comes with 20-century women in Russia, one thing remained. Women’s natural role in motherhood is still promoted throughout the state. Being a caring and loving mother is also an important rule in shaping the future of Russia. And this is something to hold tight by many women in Soviet Union.