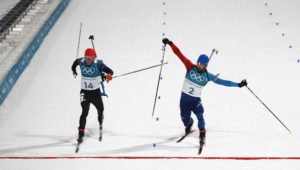 Unlike any other countries, Soviet citizens took sports seriously. Being healthy had been part of their life. It was even the country ideology. The leader believed that healthy workers could stay longer at work. So, in every morning national radios would gave an instruction to the citizens to stand on their legs and stretch their shoulders wide. That was not occasional instruction only. Being healthy was so vital that the instruction was also given at factories, schools, even nurseries.

The country did not only focusing on making its people healthy, but also shaping the new men. Their other ideology was that healthy men today could be part of their army in the future. So, their focus was also strengthening the military. They also focused on combining sports and arts. That’s why, there were a lot of sports that Russians loved during the Soviet time. However, there were 8 famous sports to do in Soviet time. Those are:

People nowadays know it as Russian Hockey although it used to be Soviet Hockey. Although most rules are written in English, Soviet claimed that they found the hockey. In 1955, Soviet Union founded Federation of International Bandy along with three other Nordic countries. During setting the rules, one difference from English hockey was that the boards that came from Soviet rules.

Soviet bandy team was the strongest one at that time. One of the teams was called “Red Army.” Starting from 1957 to 1979, Russians almost always took place of one of the two best. Moreover they never missed out getting a medal. Then, bandy also became famous among women after the Soviet era.

You can also read things Russian folks like to do in winter.

Among other winter sports during Soviet era was biathlon. Even nowadays, biathlon still has so many viewers. It rakes the first position in TV viewership during winter. From this sport, Russia has won so many medals from Olympiads and World Championships. During the Soviet era, there were so many talented and successful biathlon athletes. Those were Vladimir Melanin, Nikolay Kruglov, Alexander Tikhonov, Valeriy Medvedtsev, Venera Chernyshova, Elena Golovina and Svetlana Petcherskaia.

In 1960’s, Soviet rose and dominated this sport in the world, especially ice dancing and pairs skating. In every winter Olympics from 1964 to 2006 a Soviet or Russian pair brought home gold medal. Those were the longest streak that a country could make throughout history. Then the streak was broken by a Chinese pair in 2010, but Russia rose up again and a Russian pair brought home a gold medal again in 2014 Winter Olympics.

Speed skating was like any other skating during the Soviet time. Speed skating has been a long tradition in Russian empire with Nikolay Strunnikov as the pioneer and the star of the sport. Then, the tradition still continued during the Soviet era. During this era, Russia gained greater success. There were a lot of talented speed skaters born. Some of those were  Lidiya Skoblikova, Maria Isakova, the Stenins, Pavel Pegov, and so many more. Even after the collapse of Soviet Union, Russian still be able to maintain the success with so many next generations that come afterwards, like Natalya Voronina, Denis Yuskov, Pavel Kulizhnikov, Elizaveta Kazelina, and Ruslan Murashov. All of them got their titles in World Championship and World Cup.

Before the collapse of Soviet Union, a full program for women gymnasts was introduced in the Olympics. So, at that time, Soviet gymnasts were predominately with both men and women gymnasts. From 1952 to 1992 inclusive Soviet women’s squad won almost every single title that World Championship competition and at the Summer Olympics had. The Soviet legacy remains the strongest one in the history of artistic gymnastics and Russia continues to bring home medals in every single competition. (Also read: modern entertainment that Russians love to see today.)

Swimming was not a popular sport in Russia. Russians saw it as an elite sport. However, before the collapse of USSR, swimming became recreational and successful in Olympic games. After the USSR collapse, Russia could not achieve the same success as the USSR did. However, Russia still has a successful swimmer who earned Olympic gold medals for four times.

Those are 8 famous sports to do in Soviet time. You can also read most popular sports in Russia today.