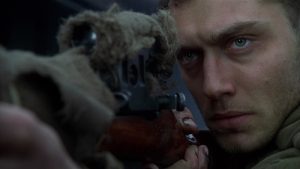 In Hollywood movies, many would think that Russian characters are almost always referred as “the bad guy”. It’s partly true, many Russian actors who made it in Hollywood take specialized roles as one of these bad guys. But the truth is, not all of them are antagonists. Although rare, there are some Russian characters that are protagonists.

The thing about Hollywood is, there’s no correlation between the actor’s nationality with the role he or she would play. So it’s not surprising if you find many Russian movie characters who are not played by native Russian actress. It is interesting for us as viewers. Because we got to find out how good they are to portray a character from a different culture and often, they don’t speak Russian.

Here are some of those characters:

Enemy at the Gates is the popular Hollywood movies depicting the iconic Battle of Stalingrad. The battle is remarkable among Russian people. So you can guess that many aren’t exactly fond of its Hollywood depiction.

But we can appreciate the acting of those Hollywood stars. Jude Law acted as Vasily Zaytsev, a sniper and the legend of Battle of Stalingrad. He’s remembered by Russian people as a hero. Many agreed that Jude Law portrays this character well.

Enemy at the Gates is a movie set in Russia, however, most of its main role being played by non-Russians. Included in the cast are Rachel Weisz as Tanya, Bob Hoskins, and Joseph Fiennes.

We can agree that Harrison Ford is a talented actor. The man is mostly known for his role as captain Han Solo in the Star Wars Trilogy. When he played another captain role, but now in a Russian setting, it’s such a breath of first air.

Harrison Ford played the role of Captain Vostrikov of submarine K-219. The movie is based on a real event. It tells a story about the heroism of the submarine crew during the cold war.

Harrison Ford is not the only Hollywood stars acted here. Liam Neeson took a role as executive officer Mikhail Polenin.

What is it that Cate Blanchett can’t do in a movie? We are already awed by her character, some of them are iconic such as Lady Galadriel in The Lord of The Rings.

On Indiana Jones and the Kingdom of the Crystal Skull, Cate Blanchett took a role that’s slightly unusual from her niche of acting. She played Colonel Irina Spalko. A soviet agent and a KGB member, she plays as the antagonist opposite of Harrison Ford and Shia LaBeouf.

We always enjoy Angelina Jolie being a deadly, tactical spy who still somehow do it in a style too. In 2010 Angelina Jolie took another role as a spy. She played Evelyn Salt, a secret agent who is also suspected being a Russian spy.

If there is the most popular Russian hero in a Hollywood movie, that would be Natasha Romanoff in Avengers. Played by Scarlett Johansson, the character gained so many fans from all over the world. Natasha the black widow is a strong and gorgeous superhero.

A little bit of fact, Natalia Alianovna Romanoff was born in Stalingrad, Soviet Union. Stalingrad is the city of heroes! Now we know how she got it in her blood to be a heroic icon.

By the way, Stalingrad is called Volgograd now. It is a nice city in which you can consider to study abroad at its Volgograd State University here.

This Russian character in Michael Bay’s movie is nothing but fits into those Russian stereotypes imaginable. Many think they made no sense at all. Colonel Lev Andropov is depicted wearing no spacesuit and drink a lot of Vodka. The space station “Mir” is depicted to be lacking in modern technology. The character of Andropov is played by Peter Stormare.

The 2007 gangster movies Eastern Promises portrays the mysterious and ruthless Nikolai Luzhin. The character is played by Viggo Mortensen.

Many actresses have played Anna Karenina in the past. The character, based on Leo Tolstoy’s book with the same title, is undoubtedly iconic. Anna Karenina is among the magnificent books of Leo Tolstoy. In the 2012 movie, the character is played by Keira Knightley. The movie won Academy award for best costume design. But many complain that the movie hasn’t successfully portrayed the feel of real Anna Karenina as depicted in its original literature.