Many cultures around the world develop their own brand of headgear. The headgear may be used as mere clothing accessories, ceremonial artifact, or a form of protection from extreme weather. As one country that encompasses some of the coldest place on earth as well as some of the most fashionable residents worldwide, Russia also designs various kinds of headgear. 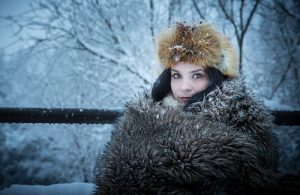 The classic Russian headdress Kokoshnik is one type of headgear that functions as clothing accessories. It takes similar role to a crown or tiara in other Western countries, and usually worn by women. On the other hand, the iconic Russian fur hat Ushanka is created to protect head and hair from the harsh elements of winter. What kind of hat is it, and does Ushanka can be worn by everyone? Whether you are a recent visitor to Russian or a huge fan of Russian fashion, this item has some important significance that you should know.

What is an Ushanka?

Ushanka is a Russian fluffy fur hat with ear flaps that can be tied to the top of your head, or fastened on the chin to protect your ears, or tied to the back of the head to offer better visibility. Not only protecting your head from deep frost (extreme cold weather of -70 to -40 degrees Celsius), Ushanka also safeguard it from hard blows. Therefore, it is historically used by Red Army soldiers, and later becomes a symbol and fashion icon of Russia. But the origin of Ushanka is even longer than the World War II.

For centuries, fur hat with ear flaps had been worn across Balkan, Scandinavia, and Slavic countries. It was commonly used by people of Serbia and Bulgaria, Sweden and Norway, as well as Russia and its surrounding nations. But the design of modern Ushanka could be traced back to the 17th century, based on a Russian round fur hat with three flaps called “Treukh” which was developed according to the Norwegian Norvezhka hat.

After the bloody Bolshevik Revolution in 1917, the Russian White Army was given Norvezhka hats. A few years later, the Red Army improved the designs to create the hat that is currently known as Ushanka. During World War II (1941-1945), fur factories all over Russia was spurred to produce Ushanka solely for the Red Army. After the end of Soviet, Russian fur factories has been freed from the obligation and it is no longer the sole manufacturer of Ushanka. Many security and defense agencies in various countries has seen the advantages of Ushanka and include it in their uniform packages.

Does Ushanka can be Worn by Everyone, or only the Army?

Theoretically, Ushanka can be worn by everyone, regardless whether they are old or young, a uniformed officer or an ordinary civilian. Nowadays, Ushanka is also popular among tourists and expatriats as one of the best Christmas gifts to bring from Russia. However, there are significant differences in how the hat is worn.

How someone wear the Ushanka in our current era has more to do with his or her age, what is his occupation or what kind of image she want to convey to the world, and less related to the weather. Although it is generally recognized as stylish Russian accessories for men, but people of different age will have different preferences. Children will use Ushanka with flaps tied under their chin, because their parents want to shelter them from cold. Young men often prefer to use them with ear flaps hanging down for cool appearance and manlier look. Meanwhile, older men will tie the ear flaps over their head to project a more imposing manner.

For people of certain professions in Russia and other countries, the color, style, and material for Ushanka is dictated by their agencies’ rules. For example, American civilian police uses gray, while Post Office worker uses blue. The Royal Canadian Mounted Police use a crossover between Ushanka and aviator hat from muskrat fur. Chinese military uniform also include a similar type of headgear called “Lei Feng hat”.

Previously, Russian military also wore Ushanka which should be worn with ear flaps tied to the top of the head. However, they introduced a new set of uniform in 2013, and the Ushanka was replaced with a new type of winter hat that was supposedly more suitable for use with a helmet or modern communications deviсes.

The material also receives harsh criticism from modern eco warriors and wildlife defenders, which makes original fur becomes more expensive and difficult to find. Most people currently uses Ushanka from faux fur. Due to that, the color of Ushanka is not limited to natural animal fur colors like white, black, grey, and brown; but may vary to the synthetic and more “eye-catchy” variations such as orange or pink. White-colored Ushanka is traditionally said to be specifically worn by women and girls, but the differences has blurred as it rises to the fashion magazines and runway these days.

The runways? Yes, Ushanka may no longer suitable for Russian military purposes, but it has risen in ranks into a cultural icon that is adopted by high fashion crowd. Original and modified Ushanka has repeatedly entered the collections of prestigious fashion houses such as the late Karl Lagerfeld’s Chanel, Paul Smith, Bally, and Ralph Lauren.

It is also featured in internationally-known magazines like GQ and Vogue, aside of regional fashion spreads in various countries. Most notable, the famous rapper Jay-Z has been caught on camera wearing Ushanka during the 44th US President Barack Obama’s inauguration. Sensational, don’t you think so too!?

Unlike the graceful Kokoshnik that comes to international attention as wedding attire or celebratory accessory, Ushanka can be worn comfortably and fashionably by everyone and everywhere in winter. This expands the scope of market for the iconic Russian hats into the whole western world and East Asia. People also increasingly recognize Ushanka as just a Russian clothing accessory, instead of attaching certain connotation into the former Red Army uniform.

The latest rise of Ushanka contributes to the increase of fashion products among other Russian exports. As mentioned by the President of Saint-Petersburg Global Trade House, Natalia Orlova, in a company news release from 2013, “Our winter apparel has become incredibly popular, especially our Russian-made shawls, mittens, Ushankas, and traditional navy shirts (Telnyashkas).”