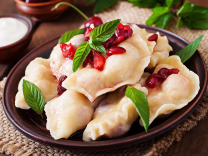 There are many ways of doing the Russian dumplings. Just like many of its Russian Food Cultures That Should Be Considered, Russian dumplings fillings can be both sweet, savoury or just plain. It all depends on the changes in seasons, which part of Russia are you at, and your eating preference. Pelmeni is the savoury version of the Russian Dumplings and The sweet ones is known as Vereniki.

The Russian dumplings or better known as pelmeni is a bit thicker than the Asian dumplings and so much richer in the fillings. If the common filling that many dumplings filled with meat, then prepare for a richer experience when you are tasting Russian dumplings. It is a whole lot different when you have different meat available or even fruits for that matter. Dumplings are eaten all year-round in Russia, from the fruitful summer to the meaty winter, there are so many filling that can dumplings have. Here are some fillings that you can try when visiting Russia.

From the idea to store food for wintertime, pelmeni becomes a well-known food that can be made beforehand and store in frozen form and an easy solution for a great diet. This combination of flour, milk, egg, and salt is thicker than the common dough but the fillings are what set it apart from other nation that has dumplings like form. Like the Japanese gyoza or the Italian tortellini. What is the common filling? It is rich in meat with a combination of ground pork, onions, garlic, salt, and pepper. This Russian Meat Dishes That Can Be So Mouthwatering is easy to make and particularly famous throughout Russia.

A lot of tasty food waits in the Urals. No matter where re you at in the Ural mountains or cities the main dishes of the area are pelmeni (Russian dumplings), posikunchinki (small fried meat pastries), and shangi (potato cakes). The dumplings in the Ural may be slightly different in terms of fillings. The cold area requires a more meaty substance. So, the Urals come up with an interesting combination of beef, lamb and pork mixture into their dumplings. You can imagine the juicy and tasty flavour that comes from the combination, such a dream.

3. The Potatoes Fillings For The Great Lents

Special holidays call for special dishes. And yes you guessed it right. Pelmeni is also on the table during those happy time of the year. Like for example during Lent when houses will brighten up the most ascetic men on the table. Lent is Fasting In The Russian Orthodox Church when people avoid the indulgence of meat, eggs, fish, wine, dairy products, wine, and oil. According to that guidance, the pelmeni dough is without egg and filled with mash potatoes, onions and mushrooms.

In Siberia where often cold with lots of snow. It acted as frozen preservation in the outdoor. Pelmeni, the Russian dumplings is one of them. Hunters will head out to the Siberian taiga with a bag of frozen pelmeni as their resume. They are easily cooked with just by boiled in water. Although the Pelmeni But Siberian Style You Will Love It, they are boiled in salted water with chicken or meat broth. The cooked pelmeni Siberian style is served rich with spices and side dishes such as smetana (sour cream). mustard, tomato sauce, and vinegar.

Russia has numerous Russian Dishes That Ca be Made By Yourself at home. Like the pelmeni, the Russian version of dumplings. You can just get any fillings with whatever available in abundance. If there is no meat, try the Far East version with fish. The exotic region with its different climate, and fauna, make it twist version of the common meaty pelmeni.

The climates make fruits and vegetables hard to grow. Dairy products also come very little in the area. But, that whatsit so unique about Russia, the wide vast area makes it rich with tradition and cuisine. Fish and seafood are abundant in the Far Eastern of Russia. Humpback salmon, halibut, keta salmon, pike perch, cod and all types of fish. Some even come up with a mixture of fish and meat as a variation. Served with sour cream, then the fish pelmeni go well with vodka or white wine.

The Urals is a vast area and in the Udmurtia region, they make pelmeni a little differently. First of all the shape of the pelmeni, itself is smaller. This helps them to be juicier and bite-size portion. In Udmurtia pelmeni come with more greasy meat broth with mushroom fillings and rich of oils. There are many Delicious Mushroom Recipe That Ca be Made At Home in Russia. This may also due to their large forest areas and also the Mushroom picking activities that become nations favourite activities. Making mushroom dishes become the next best thing afterwards.

7. The Hare Dumpling from Marii-El

Pelmeni can also be made out of wheat dough. This is what you will encounter when visiting a smaller region of Russia such as Marii-El. The dumplings here has a thinner layer, so much like the Asian version of dumplings. The shapes are cut into pieces in the form of crescents of course. And what do they use as the filling? It is raw chopped hare meat and lots of onion. Sometimes, they mix it with pork or meat, if you can find any. In other time some dumpling filling version can also have millet or barley porridge, or cottage cheese as the filling.

Another area such as Kalmykia is famous for its lamb filling of Pelmeni. Now, Russian is known as a meat-eater, and love their meat in a large chunk. So, instead of minced it, They chopped the lamb and add spices. So, you can pretty much indulge the juicy lamb with a large amount.

The filling is just as any pelmeni only the dough is bigger with a half-moon to hold the filling. The stuffing may vary — sometimes it following what is in season. Cherry vereniki is something that you commonly have as a dessert in the early summer. Another flavour may come as raspberry, blueberry, strawberry and many more.

No one really knows when Russians start cooking their dumplings, although many may have said it is highly influenced by their neighbouring countries. Dumplings are one out of many Russian Food Which Is Similar To Typical Foods In Other Countries. Whether they are pelmeni or Vereniki, if they are sweet or savoury. There are so many fillings you can choose from. The time-consuming dish is often made in advance and put into the freezer for other days. SO, no wonder everyone goes crazy for this meal. It is delicious, rich and tasty and comes with lots of variation.