There are many things we can learn by learning or traveling to a certain country. We can learn about its culture and history by visiting museums or historical buildings. We can also learn by observing the people habit. Understanding other countries culture is an important thing. That way, we know how to act appropriately when we travel or visit a certain country.

One part of the cultures that is very important to know is the food culture. When we talk about food culture, we will find various and different kind of etiquettes in different countries. For example, when you go to French and about to eat your meals, some of the things you have to remember are to keep your hands on the table all the times and to only eat your meal after the host says “Bon appetit!”. By implementing those dining etiquette, you show that you respect the culture of French people.

Just like French people, Russians also have food cultures worth to learn. Now, let’s learn some of the Russian food cultures.

Russian Food Cultures That Should Be Considered When Go There

For breakfast, it is really common for Russian to eat the pancake with either sweet or savory fillings. Other options are porridge or bread. There are various ways to eat bread. You can eat it with some cheese, jam, or sour cream.

Russians people are really familiar with appetizers. They usually serve it not only before the main course but also between shots of vodka. There are many kinds of appetizers. Olives, bliny (Russian pancake made from wheat), cheese, and caviar are some of the examples. But, the most famous one is Salat Olivye and Selyodka Pod Shuboi. Salat Olivye is made by mixing vegetables, chopped chicken or ham, potatoes, eggs, and canned peas with mayonnaise, while Selyodka Pod Shuboi is made by mixing diced pickled herring, chopped onions, and grated boiled vegetables with mayonnaise.

You will find soup in every Russians’ meal. The first kind of soup you can 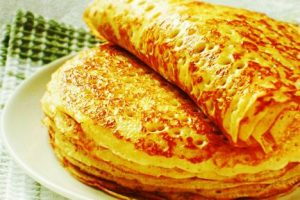 easily find in Russia is borsch. This soup is made with beef stock and can be served hot or cold. The second example is okroshka, which is made with some vegetables, such as chopped cucumber and potatoes, mixed with eggs, meat, and herbs. This is one of Russian’s cold soup that can be enjoyed in the summer. Another example of the Russians’ soup is shchi. This soup is based on cabbage and made in two versions, the vegetarian and the non-vegetarian. For vegetarian, you only need sorrel, spinach, and other greens to make Shchi. If you want to make the one with meat, you can use chicken, beef, or lamb. If you like pickles, you will enjoy Solyanka. This soup is made of the mixture of pickled vegetables, meat, and potato. Back in the day, it was widely consumed by the peasants in winter. Another popular soup in Russia is Ukha. This soup is made by mixing fish, herbs, and vegetables in a clear broth.

Russians cuisines are mostly meaty and heavy. One of their best main courses is bef stroganoff. This dish is made of beef, mushrooms, and sour cream. It is believed that the dish was invented by a French cook. If you want to treat yourself with some stew, you can have Zharkokye as your main course. By having this food, you can enjoy a hot meat stew served in a little jug. You can also have kebab as your main course. In Russia, it is called Shashlyk. This is a kebab made of meat or fish.

Russians love sweets. For dessert, even in winter, a Russian will still enjoy an ice cream. They also like to eat cream cakes or pastries for dessert or for tea time.

Russians eat heavy meals at lunch and the lighter one at dinner. That is why when you are invited to eat dinner in a restaurant, do not expect heavy meals. In the evening, Russians choose to eat light and enjoy their evening by socializing, drinking, and dancing. This is an important Russians food cultures that should be considered when you go there so you know what to expect when invited to lunch or dinner.

As it was mentioned above, it is common to get invited to a party or a get-together. The most important thing is to never reject an invitation to drink or eat because it is considered very impolite. Being invited to enjoy meals together is an honor for Russian people. So, make sure you accept the invitation, arrive on time, and bring fruit or wine for the host. During the meal, you have to keep your hands on the table. But make sure your elbows are off the table.

Since the Russians use the standard European utensils, you will find a fork and knife on the table. With this standard, you can use your left hand for the fork and right hand for the knife. Another part of the Russians food culture is to only eat after the host starts to eat. While you are eating, the host will offer to refill your plate several times. Don’t worry! It is okay for you to refuse the offer. Just make sure that you compliment the meal and the host.

If you are almost finished with your meal and there is only some gravy left, use your bread to mop it up. But remember to not leave your plate completely clean. This is a part of Russians food cultures that should be considered when you go there. Why? Because a clean plate suggests that the host does not serve enough food for the guests. Once you finish your meal, do not leave the table until the host says so. You may offer to help the host to clean up. This kind of offer will be refused but still, be appreciated.

Another thing you have to remember when you are being a guest is when you are invited to a meal, the host expects to spend time with you after the meal. That is why it is better for you to not make any after-dinner plans. It is common to leave in an hour or two after the meal.

You have informed about the Russians’ culture of being a guest. Now, you must also learn how to be a host. The most important thing you must do when you are inviting people to a meal is to serve as many foods as possible. Many have said that in Russia, it is very common to serve food in an amount that is impossible to eat. This is a part of Russians food cultures that should be considered when you go there. The reason is that it is a way to show the guests that there is enough food for everybody and they must feel free to eat as much as they want.