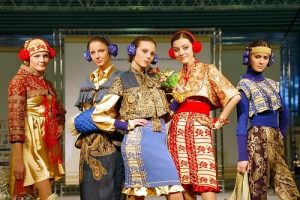 In many cultures, color holds a certain significance. A color symbolize something, and it’s different from one culture to another. It’s also the case in Russian culture. From red to black, each has a different meaning.

Most people associate would Russia with red when it comes to color. And it’s with reason. Red in the past is almost stamped as an identity to Russia. During the Soviet era, red is the color of communism and revolution. red is a symbol of the blood of the working class, fighting against capitalism and feudalism.

But what about other colors? Blue. white, and black, each also has special meaning in the culture of Russia.

In Russia, colors in traditional Russian costumes bear two meanings. First, the social meaning. Social meaning shows the wearer the age group and the social class of said wearer. It also means in which tribe she or he belongs to.

The second meaning is ritual. The color on the clothes conveys a spiritual message. However, an outfit can have both meanings simultaneously, social and spiritual.

White is a color of purity in many cultures. Russian culture also has this belief. by default, the color of the fabric is white or ivory. In the past, getting a pure white color is expensive since bleaching is not an easy task. However, ivory or creamy fabric, the natural color of linen, is still considered white.

For social meaning, a pure white bleached linen is worn by wealthy people, since they’re the only one who can afford it. White clothes here symbolize status.

For ritual and religious meaning, white symbolizes purity. White is the color of heaven. In Russian culture, white is a color to wear during a crucial transformation period of one’s life. Children wear white because it’s the color most fitting for their innocence. Brides also wear white dresses before the wedding ceremony.

Other groups of people who wear color white are new military recruits and seniors. Color white is also a symbol of motherhood. Married and mature women used to wear this color as their main color. They wear other colors too such as red but merely as a tiny decoration.

The red fabric is both worn on everyday attire and on a special occasion. In daily clothes, people put a red ornament around the neck and wrists as a means of protection. Both men and women use red decoration on their outfits. In harvesting ritual costumes, long red stripes mean a stream of energy. The red color is also a symbol of energy flowing between human and nature.

Red is a typical bride dress color in Russian villages wedding. It means a readiness to be a mother. Red in Russian word has similar root to the word beauty, thus red is also a symbol of beauty. Other meanings of color red are fire, sun, blood, and productivity, among many others. During a pagan era of Russia, red is a symbol of gods of fire and sun.

Black has always been the color of mystery. Black in clothing extends beyond pure black. Other dark colors such as dark grey and dark brown were considered types of black clothing. Black is a natural color. A type of cotton produces this color naturally due to the content of acidum tannicum.

Usually, monks and priests wear the color of black. Symbolically, black color is a distance between human and worldly matters. Hence why devoted people wear this color. It’s a refusal to engage in worldly business. It is also indirectly translated as celibacy, one’s decision to not have children. On the other hand, married people avoid wearing black as it is some kind of black omen to the couple’s fertility.

Other groups of people who wear black are old people, especially 70 years old and above. The black attire to them symbolizes the second phase
of aging. Celibate women also wear blacks, even if they are a regular farmer and not a nun.

However, black in Russian traditional costumes doesn’t always mean glum. In the Voronezh region in southern Russia, wedding costumes are black. People use embroidery to style the gown. It means to be elegant and noble.

Russian have rich diversity on their wedding customs alone. The culture is influenced by many other neighboring cultures. For example weddings customs in Dagestan and weddings in Tatarstan.

Blue is one of the expensive colors to make. Blue is an outright symbol of wealth due to its rarity. Only the nobility and the wealthy wear this color until the 17th century. This color was also a symbol of noble birth. The trade with the Asian countries make this color more accessible and thus, blue outfits become common.

Yellow can be produced naturally using a mix of herbs and certain natural chemical. The gold color is also considered yellow. Like the gold itself, this color means wealth and luxury. Compared to blue and green, yellow clothing was quite common.

Green was also as rare as blue. It can be symbolized as wealth too due to its scarcity. It also connects with nature, as green is the color of nature. Green also means fertile and fertility.